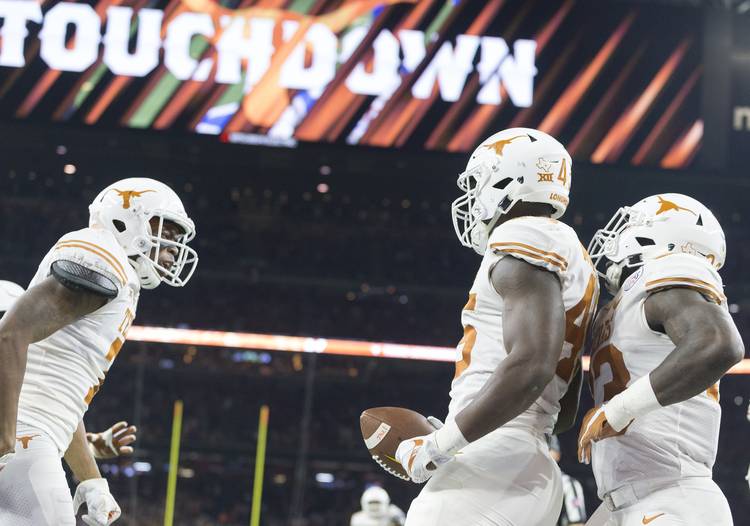 Texas linebacker Anthony Wheeler (45), center, celebrates his scoop and score touchdown with defensive back Antwuan Davis (7) and linebacker Gary Johnson (33) in the first half of the Texas Bowl NCAA college football game in Houston, Wednesday, Dec. 27, 2017. (Stephen Spillman / for American-Statesman)

But the win did.

The fateful meltdowns that cost Texas winnable games against the likes of USC and Oklahoma and Oklahoma State were nowhere to be seen at NRG Stadium. These resolute Longhorns — battered by a frustrating, season-ending home loss to Texas Tech and excruciating defeats in overtimes and all but decimated by defections to the NFL, transfers and injuries by eight critical players — withstood it all.

The withering, painful defeats. The modest expectations from a dejected fan base. The realization that this could be the fourth consecutive losing season.

Instead, Texas gathered itself, led from impressive start to even more overwhelming finish and crushed a worthy SEC opponent to win an actual bowl game and finish with a winning season by pounding Missouri 33-16 in the Texas Bowl.

“Hey, we’re 1-0,” said bubbly new athletic director Chris Del Conte, just weeks away from accepting this latest gig. “What else do you need to know?”

Nothing else on this night.

It was enough that the 7-6 Longhorns broke the shackles of losing and dominated a 7-6 Missouri team that had won six straight and averaged 45 points a game during that streak. And Texas was good enough to win its first bowl game in five years, close on the correct side of .500 and show a glimpse that better days under Tom Herman are yet to come.

“We’re going against the No. 1 offense in the SEC,” said Texas junior linebacker Breckyn Hager, who honored the memory of Tommy Nobis by wearing the No. 60 jersey of perhaps the most famous Longhorn in history. “The SEC is all hyped up and all of that, and we held them to 16 points. So you tell me, how do you think it’s going to look next year?”

Better, I’ll tell you. Much better.

Yes, it’s a flawed team, but also a resilient one that could have and maybe even should have upset USC and Oklahoma State and clearly should have beaten the Red Raiders. Only four seniors started for the Longhorns. Texas was in every game but one this season, getting exposed only by Big 12 finalist TCU. It played well on the road in Los Angeles, in Ames against a gritty, better-than-expected Iowa State and in Morgantown, W. Va., where the Mountaineers are always tough to beat.

“Any time you can give confidence to a fragile group of guys,” Herman said, “it’s big.”

The Texas defense? The one that held Missouri to one touchdown drive, a field goal and a quick-strike, 79-yard bomb on the first play of the second half has shown signs all year of being a championship-caliber defense. It’s a Todd Orlando unit that kept in check elite quarterbacks like Sam Darnold, Mason Rudolph, Baker Mayfield and on a cold December night the All-SEC first-teamer Drew Lock, who never could get untracked.

“We’re not built to beat a Missouri 45-42,” Herman said. “Do you guys realize the quarterbacks we’ve faced this year? It’s like a who’s who. And we’ve played pretty dadgum good against ’em.”

Herman’s right. The Longhorns aren’t built to beat anyone 45-42. He knows his offense needs a major overhaul, but he also knows this Texas Bowl victory stems the losing, hands him some serious momentum on top of a recruiting class that ranks third in the nation and provides his beleaguered team with a much-needed dose of confidence when it faces a 2018 schedule that includes eight bowl teams and five that have won eight games or more. Most of those top-drawer quarterbacks Texas played will not return next fall.

Until Herman can find that dynamic quarterback and develop an offensive line that can spring a running attack beyond the 113 yards it produced Wednesday with no gain from a running back longer than 9 yards, Texas will have to be content with mere winning seasons. The offense that squandered terrific opportunities and realized zero points from possessions that began at midfield, Texas’ 48 twice and 44 and Missouri’s 28 has big-time issues.

Furthermore, neither starter Shane Buechele nor freshman backup Sam Ehlinger gave any indication either was a complete quarterback with great passing command and the overall skill set as they rotated at the position all season and during the first half until a strained groin kept Buechele on the bench for the last 30 minutes. Ehlinger had his bright spots against USC and OU but also had a big fumble on the lip of the goal-line in the Coliseum and threw critical interceptions at the end versus Oklahoma State and Texas Tech.

“Both played pretty well tonight,” Herman said incredulously. “That’ll be a great battle going into the offseason. Neither played well enough that you would anoint them (as the clear starter). We’ll see how it turns out. We’re a work in progress.”

Just as it had all season long, the Longhorns put on display what had gotten them here: Solid, tenacious, relentless defense, tremendous punting from bowl MVP Michael Dickson and a sporadic offense that too often couldn’t get out of its own way.

The defense scored nine points, the offense 24 with senior wide receiver Armanti Foreman tacking on a final touchdown on an end-around run with 96 seconds remaining in the game.

Which is one way Texas can differentiate itself in the pass-happy scorefest that is the Big 12. Missouri coach Barry Odom, for one, wasn’t buying the coast-to-coast perception that this league doesn’t play good defense.

“No offense, but I think the national pundits are wrong,” Odom said. “The 12 games that I’ve watched on Texas, I saw some pretty good defenses played from start to finish, so I have a great deal of respect for their league.”

So does Greg Sankey, the SEC commissioner who was on the sidelines at the end of the game and noted, “It’s a lot more fun when you win.”

Don’t Texas know it. It felt the anguish of losing four games by five points or fewer.

It’s made plenty of missteps that doomed Texas to a pedestrian 6-6 record in the regular season, but this was a solid win, minor bowl notwithstanding, and the players seem sold on the direction they’re headed.

“Just keep chipping away,” Ehlinger said of his offseason plans.

Texas needs to pound away with a more efficient ground game with terrific freshman Daniel Young, who scored a touchdown on a brilliant wheel route option and led the Horns in both rushing and receiving yards. And it has to be more capable in the passing game, no matter who’s taking the snaps. The defense with outstanding play from linebackers Gary Johnson and Anthony Wheeler and Hager up front offers hope for the future.

There was enough in the victory to offer some optimism that Texas is closer to being back than it is to lingering mediocrity that it’s been mired in for this decade during which it’s finished in the Top 25 rankings just once.

As safeties coach Craig Naivar pointed out amidst the wild celebration the field after the game, “This sure beats the alternative.”

Bohls: Reviewing my preseason Texas predictions — Close on quarterbacks, not on record