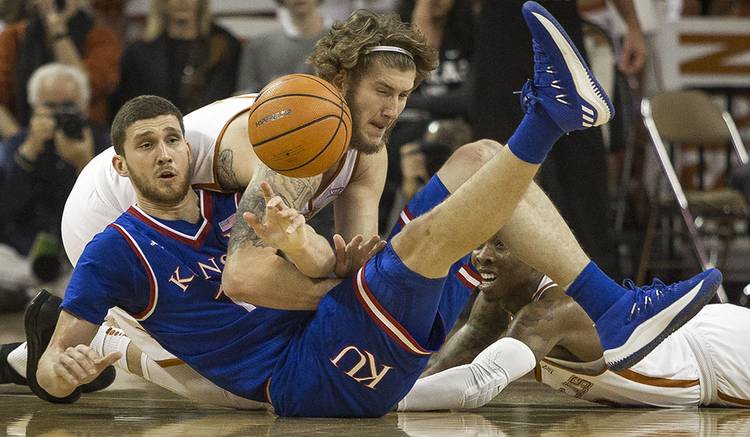 The always-competitive, highly charged Big 12 basketball race will end probably as it began on Friday night.

With Kansas on top.

It’s as certain as the sun rising in the east. You know the sun. The one that Bill Self said he could have sworn he saw Mo Bamba block at the Erwin Center in the league opener.

The Texas center didn’t, of course, but maybe only because it was a night game. He did block everything else.

“That guy could have blocked the sun tonight,” said Self, whose Jayhawks embarked successfully on a journey that may well lead to an absurd 14th consecutive conference championship in March that should embarrass the rest of the league. “What was that, a solar or lunar eclipse we had a few months ago?”

Bamba was arguably the best player on the court in this league opener, what with two blocks shy of a spectacular triple double in a 22-point, 15-rebound, eight-block Big 12 debut. He’s good.

Problem was, the next five best players were wearing Kansas uniforms.

The next three certainly were as Devonte’ Graham, Svi Mykhailiuk and Lagerald Vick combined to drain 16 of the Jayhawks’ 17 three-pointers —  the most ever by a Kansas team in a league game — in a 92-86 win. Self said he actually instructed his team to shoot 35 threes. Initially, he told them 40 but decided that was too much, even for a trio that is each shooting 44 percent or more.

Shaka Smart doesn’t dare tell his team to attempt that many for fear some of the fans in the first row might require medical attention from errant shots. Texas’ offensive deficiencies will likely cement it to a middle-of-the-pack Big 12 place, and even that high only if the Longhorns become defensive gnats. Smart has seven players with an accuracy of 31 percent or worse behind the line with Andrew Jones the only competent shooter at 43 percent.

Texas, meanwhile, has vacillated between a very promising team that can beat a Butler or an Alabama team on the road and an offensively challenged squad that can look downright awful and managed to beat a 5-7 Tennessee State team by a single point on a late Matt Coleman floater. That was the same Tennessee State team that Kansas manhandled 92-56 in its season opener.

In short, it’s a sizable gap between an 11-2 Kansas team and a 9-4 Texas club that must refocus quickly with a road date at Iowa State on Monday. That matchup might represent the Longhorns’ best chance of stealing an away victory if Smart’s bunch has any hopes of finishing 9-9 and harboring ambitions of making the NCAA Tournament after a one-year absence.

Smart’s not looking nearly that far on the horizon and shouldn’t. But he knows full well how treacherous the Big 12 is with eight other league teams with an RPI in the top 47 and five of them in the top 25.

“The gap tonight was six points on the scoreboard,” said Smart the literalist. “In the standings, they’re 1-0, and we’re 0-1.”

And in reality, Kansas is a loaded team that has three players who can scorch the nets night after night, and Texas never knows where it’s next perimeter shot is going to come from. It needs more rebounding from its guards, more crucial stops and fewer empty possessions.

It has to get more consistency and hair-on-fire, reckless abandon out of Dylan Osetkowski, who had his poorest first half of the season before rebounding with a strong showing after intermission. Eric Davis Jr. missed his first eight shots behind the line before making a pair of desperation treys in the closing minutes. Kerwin Roach Jr. was 0-for-5 from long range. The best thing about Jacob Young is he’s fearless, but the worst thing is he’s fearless. And too often out of control with his drives to the basket.

Jones made a spirited return from his broken wrist bone but will need time, and Jase Febres has been invisible this year.

That leaves Bamba to carry the load, something he can’t do alone, partly because he’s not strong enough physically and not polished enough offensively.

Smart has made no bones about it that he desires a passionate defense, and his wishes had been rewarded on paper with the Longhorns as the No. 2 most efficient defense in college basketball. But they looked nothing remotely like that against a seasoned, offensive juggernaut Friday night because it couldn’t get critical stops when it needed.

“There are not going to be many teams win here,” Self said, applauding Texas’ effort. “It’s gonna be a great league. It may be great to cover (as writers), but it’s not gonna be fun. There’s going to be ups and downs, ebbs and flows. I would think 13-5 would be a very good record in this league.”

Kansas might settle for that. Texas would kill for 10-8 right now and assure itself a spot in the March party.

Kansas is operating with just seven scholarship players but is hopeful it can add a pair of elite Jayhawks players — Billy Preston and Silvio De Sousa — who remain in NCAA compliance jail after issues of a car ownership and an academic matter, respectively. DeSousa may return as early as this week, which would only make the 11th-ranked Jayhawks even more formidable for everyone else.

That includes Texas, who had hoped to make a statement Friday.

“There’s no such thing as a statement game if you lose,” Bamba said.

This may have served as a measuring stick, and Kansas just stuck it to Texas like it will most everyone else.