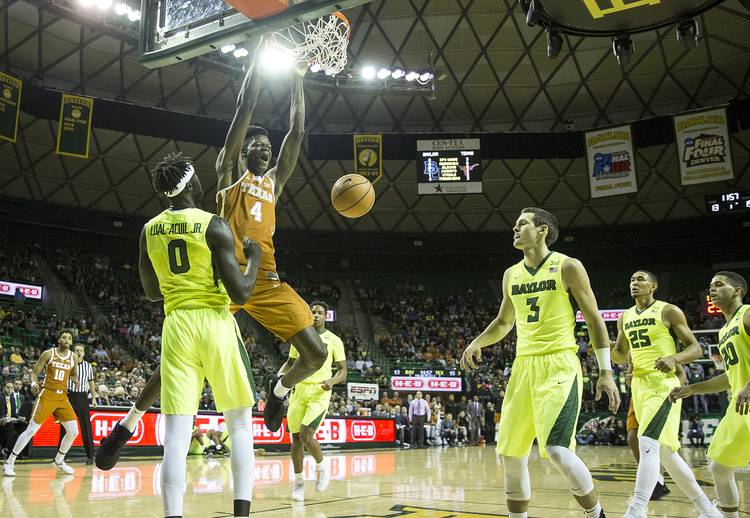 At least for a half.

Turns out it wasn’t enough.

With star guard Andrew Jones’ health status a growing concern, the Horns dropped a 69-60 decision at Baylor on Saturday, blowing a great chance to pocket a second straight road win in the best conference in the country.

Here’s what I know about coach Shaka Smart: He will turn over every single card in his relentless pursuit of offense. The Mo Bamba era is a six-month stretch, and he can ill afford not to use every possible weapon at his disposal to get this team back into the NCAA Tournament while Bamba is still enrolled in college.

On this day it was freshman Jase Febres, who chose Texas over Baylor in his recruitment. He canned four 3-pointers in an 18-point first half. And that was about it, though his 18 total points were a career high. Baylor coach Scott Drew, long a proponent of zone defense, smartly switched up in the second half and deployed King McClure to go chest-to-chest with Febres. The move worked. Febres was harassed out of his comfort zone, and the Bears got enough offense in the second half to hold off Texas.

The Horns squandered a great opportunity to steal one at the Ferrell Center, but just like their final eight field-goal attempts, they fell short of the mark. Bamba’s 3-pointer brought Texas to within three points, but UT went scoreless for the final 5 minutes, 3 seconds. After scoring 21 points in the first 10:39 of the game, the Horns could muster only 20 points in the second half.

Before we get to the particulars, Jones’ status seems much more serious than a sprained ankle or a bout with the flu. He didn’t make the trip two days after Smart told reporters he was battling an illness and undergoing tests. When I asked him for an update after Saturday’s game, his tone sounded anything but optimistic for those wondering if Jones will back any time soon.

“I’m really not able to say much right now,” he said. “He’s obviously not feeling well. Out of respect for his family and their privacy, I have to leave it that.”

Without venturing into the black hole of sheer speculation, it appears the Horns are bracing for life without their mercurial guard on the floor for the foreseeable future. His absence creates a huge void in the playmaking department, putting even more pressure on players such as Eric Davis Jr. and Kerwin Roach Jr. to pick up the slack. The two combined to make a measly 2 of 20 field-goal attempts Saturday while Osetkowski, who scored 42 points over the past games, went for only eight against Baylor.

In the meantime, the season continues, and Smart seems willing to continue to play musical shooting guards from game to game. It could be Febres one night, Davis the next.

Here’s what surely keeps Shaka up at night: He knows Bamba will be bound for the pros after the season, so the time to show huge improvement is now. We all knew Texas would be better than that 11-win debacle that was the 2017 season. With Bamba, Osetkowski and point guard Matt Coleman arriving, improvement was a given. But a tournament bid is not. That’s what made this loss so painful in Longhorn Nation. The Big 12 is deep this season, and the Horns cannot afford to let winnable games get away from them down the stretch.

Shaka knows he has to take his shot now because next season’s team will be decidedly less talented in the middle.

As we look ahead, Febres — who did lose a ball to Terry Maston with Texas down three points in the last couple of minutes, and the game turned on that turnover — has earned more playing time in the upcoming games. Smart gave Jacob Young five starts, and while Young tried his tail off, he struggled with 0-for-8 shooting in the previous two games. So Shaka sat him Saturday.

Look for Febres to get more 29-minute games. He isn’t in Jones’ class as far as playmaking is concerned, but he is someone Shaka sorely needs: a knockdown shooter who can take some pressure off the others.

“It’s always been a dream for me to start and come in and play in big games,” Febres said. “Andrew, of course, is sick, so I knew I needed to step in and bring to the team what I needed to do. But honestly, it doesn’t really matter because we didn’t get the win, so I’m not satisfied with anything.”

It was almost a perfect move by Shaka and a Texas win.

Almost doesn’t count in the Big 12. Wins and losses do.