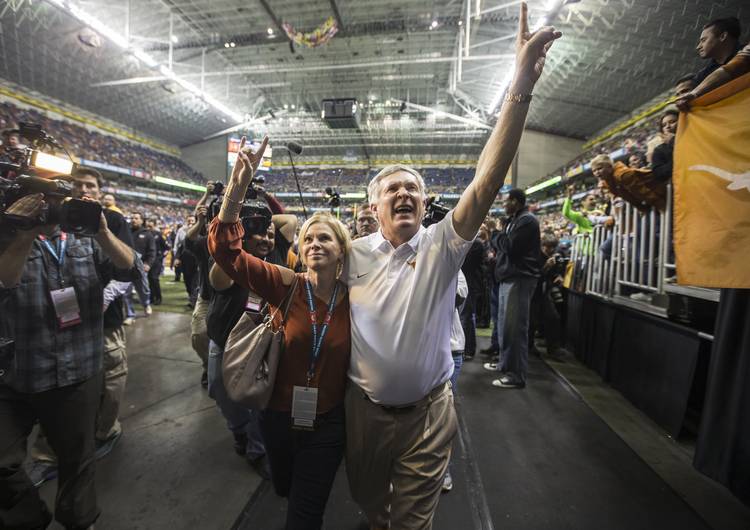 Texas Longhorns coach Mack Brown heads off the field for the last time with his wife Sally after losing against Oregon Ducks 30-to 7 in the 2013 Valero Alamo Bowl at Alamodome in San Antonio, Monday, Dec. 30, 2013. (RICARDO B. BRAZZIELL / AMERICAN- STATESMAN)

Win just one national championship and 180 or so games, and you, too, probably will wind up in the College Football Hall of Fame. Simple as that.

That blueprint worked for Mack Brown.

The former Texas coach actually won 244 games in all — the 12th most ever by an FBS coach — and won it all back in 2005 before Alabama became Alabama, and on Monday was introduced as a more than deserving, first-ballot Hall of Famer.

Just as the late Darrell Royal won three national championships, the last coming in 1970, Brown found himself in exclusive company as part of the 2018 College Football Hall of Fame class that was announced Monday, and he will be inducted at the annual National Football Foundation dinner in New York City next December. Only 217 coaches at all levels are in that Hall of Fame.

Of course, Brown also won his games over a decorated career that included stops at North Carolina, Tulane and Appalachian State, built incredible relationships with the Texas high school coaching fraternity and in most cases the media, became a terrific ambassador for Texas, ran a clean program that was virtually spotless and devoid of NCAA investigations and did so at Texas with class and integrity. What else does a guy have to do?

Brown’s election into the Hall bore out a number of significant mileposts in Texas history but also offers hope for the future of a football program that has been wandering in the wilderness almost from the moment Brown was forced out of the job after the 2013 season. His eight wins from his final year stands as the Longhorns’ high-water mark in the last five years.

So why was he pushed out? Because of the incredibly high standard that he himself had set. Now he deserves his own statue at Royal-Memorial Stadium.

“This is an honor I could never have imagined,” Brown said, “and absolutely a dream come true.”

He related a story as a grad assistant at Maryland in 1972 when he was asked to sit on a rooftop with a pair of binoculars and a walkie-talkie and scout a defensive lineman’s alignment and report back to a staffer. After relaying the information for a long time, he asked if anyone was on the other end and heard dead silence.

“I came home and told my wife, ‘I’m probably not going to be doing this job for very long,’ ” Beamer joked.

Beamer survived 35 years and won 280 games, none much bigger than a 1995 Sugar Bowl victory over Texas, which he labeled “our first win over a name school that really got us rolling.”

Brown understood the stage he was inheriting at Texas and more than fulfilled its faith in him.

He inspired a program that had produced at least 10 wins just three times in the 16 years prior to his arrival in 1998 and led Texas to that plateau or higher nine times in his 16 seasons. That included a streak of nine straight 10-win years, which is tied for the second-longest such streak in NCAA history.

He also had a school-best 12 straight nine-win seasons and six seasons of at least 11 wins and finished the year ranked in the top 15 in 10 of his final 14 years, which included a string of 10 straight. They also had seven top 10 finishes and five top five rankings.

His hiring by DeLoss Dodds after the 1997 season validated Dodds’ judgment and hiring acumen and reinforces the need for Texas to have exactly that kind of powerful, bold leadership at the top. Chris Del Conte, who was named to fill that role a month ago, should give the athletic program the same type of strong voice and aggressive leadership.

“He had no NCAA issues ever,” Dodds told me Monday. “That in my mind was huge. He not only improved the university athletic department better, he made Texas a good place to be — he more than any single person. I think that’s the biggest thing he did.”

“I had great respect for how he ran his program,” he said of Brown. “He ran it honestly and squarely.”

Dodds knew he had the right guy in Brown when he saw how emotionally painful it was for him to leave North Carolina after a tremendous run. Dodds and regent Tom Hicks interviewed only Northwestern’s Gary Barnett and Brown for the job, quickly settled on the Tar Heels coach and was instantly impressed with Brown’s people skills.

Asked what impressed him the most, Dodds said, “How sincere he was and how much he loved North Carolina, and what he felt about the kids there.”

That’s why he dispatched Royal out of the bus for a final sales pitch to Brown, who had insisted on returning to Chapel Hill to talk to his administration and players, to firm up the commitment to the Longhorns.

Brown’s presence as Longhorns head coach for 16 direction-altering years, all but one of them a winning season, after some fractured years under John Mackovic and David McWilliams underscored the requirement that the football position at UT be held by a strong leader who understands the state and the importance of recruiting successfully within that state, and who can coalesce the school’s diverse factions into one streamlined fan base with a singular purpose.

Herman got off to a rocky start on the field but is in the process of transforming the program after three dismal, losing seasons under Charlie Strong, infusing the defense with a style of play that should serve as the underpinning of his organization, rallying a diminished team for an important bowl victory over Missouri and a winning season and landing the top-ranked recruiting class in the Big 12 and third-best in the nation. Maybe he’ll be the next Mack.

Brown was the catalyst for making Texas Texas again. Sure, he would have been one of the game’s winningest coaches ever but for nemeses like Oklahoma and Florida State, but he won big, he won a lot, and he restored the Longhorns to a national prominence that it’s lacked of late.

In his 16 seasons, Brown won two Big 12 championships and finished at least first or second in the league or division 13 times, usually behind Oklahoma. Texas hasn’t been the same since, going 23-27 since Mack left.

Consider that in this decade alone, Texas has finished as a Top 25 team just once. It’s been a minute.

And just as Brown tried to measure up to Royal, so, too, must Herman stack up against Brown, the new standard and a Hall of Famer.