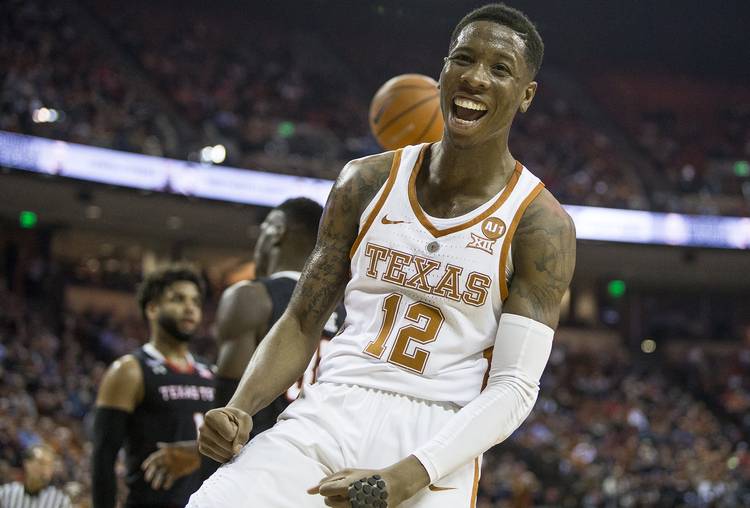 And did the Longhorns guard who this month was diagnosed with leukemia offer any advice for the third-year coach before Texas would take on dangerous, eighth-ranked Texas Tech at the Erwin Center?

“Just tell the guys to fight and play hard,” Smart relayed the message.

The pep talk worked. The Longhorns got the message, none louder and clearer than injured teammate Kerwin Roach II, who didn’t just heed the advice but spent himself in exhaustive fashion for a team that desperately needed his spark off the bench Wednesday night.

Harder and more efficient than any of the previous 80 games he’d worn a Texas uniform, pacing the struggling Longhorns (12-6, 3-3 Big 12) to a much-needed, 67-58 upset of eighth-ranked Texas Tech for their first signature win of the season. Under Smart, the Horns had only a 7-17 record against ranked teams overall and a distressing 1-10 mark versus Top 25 opposition the last year and a half.

But they turned in the most complete game of the year to stop a painful pattern of failing to finish close games, and got a perfectly timed pick-me-up from Roach with his season-best 20 points in 29 valuable minutes. It was a pivotal snapshot in a luckless season that could easily have remained on a downward turn after excruciating losses to both good teams (Duke, Gonzaga, Kansas) and bad or at least deficient (Oklahoma State and Baylor).

This could turn around a season, and Roach was largely responsible for directing the stunner with his offensive aggressiveness and tight defense on Keenan Evans, the head of the Texas Tech snake, who was held to 11 points. Heck, the notoriously bad UT free throw shooter even was near perfect at the line, draining eight of nine.

So does Smart look for that type of offensive output from Roach down the stretch?

“No, we don’t expect 20 points every night from him,” Smart said. “But we’ll take his spirit and his energy and him trying to take away the other team’s best player. I want him to play with clarity of mind.”

It came as a big surprise that Roach even was cleared to play a game or two earlier than expected for the team leader who had been sidelined two games with a fractured bone in his left hand. He hadn’t practiced with the team in five-on-five drills. He hadn’t dribbled with his left hand at all, the discomfort was so great.

He’d probably broken the bone in a practice before the Michigan game in mid-December but played hurt the next five. “It progressively got worse,” he said. “You could tell in my second halves. I couldn’t even dribble to my left. It was just pain.”

So he sat and watched and took in his teammates’ practices and games. He worked on form-shooting from the free throw line to the point he returned there with renewed confidence. Never mind he was the second-worst free throw shooter on the entire team with just 59 percent accuracy.

When X-rays revealed the bone had healed, Roach was cleared to play at 8 a.m. Wednesday. He talked to his father, who told him “if there was any discomfort, he should call it quits.”

At 2 p.m., Roach went through the team shootaround. No complications. He told the staff he’d give it a go “even if it was only 10 minutes.”

He even got a text from Jones, who had a question about financial aid. They talk frequently.

So’s Roach. The decision to put him on the floor didn’t come until just before tipoff when the team trainer winked at Smart and said Roach could play immediately.

And what did Roach say about his availability?

“Oh yeah, I’m good. That’s what he told me,” Smart said. “But Snoop always says that. He’d say that even if he had one leg.”

Roach played on two legs Wednesday, diving on the floor after loose balls, cutting to the basket with hard drives, even sinking free throws. He said the win “shows we can beat any team, regardless of ranking. I really want to finish in the top three in conference.”

So what got into him?

He came off the bench, hit a 3-pointer at the 7:10 mark of the first half and raced back on defense. Once, he was so hellbent on getting back, he threw his left shoe. He drove into the lane fearlessly. And with just over two minutes to play, he threw down an emphatic dunk to punctuate the victory. Why so hard?

“It was winning time,” Roach said. “You can play hard for 39 minutes, but you’ve got to be able to close games.”

Roach helped close this one and maybe Texas’ chapter of hard luck.