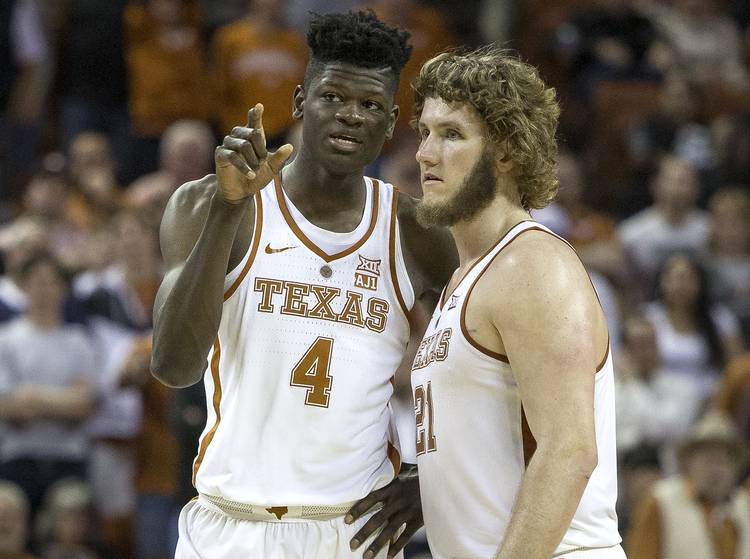 Show up ready for a fight.

Dump it inside to Mo Bamba.

Want to bet that Shaka Smart repeated those first two sentences a few thousand times in practice this week?

The Texas coach knows a little bit about psychological warfare. The game within the game has always intrigued him and there is little doubt that he has already alerted his Longhorns about what to expect from an angry West Virginia team on the road Saturday.

“We’ve got to be ready to match their level of intensity because they’re going to come out breathing fire in that game,” he said. “They will come out with a level of physicality. They’re going to try to punk us.”

The No. 6 Mountaineers, owners of a 15-3 record and the league’s second stingiest defense next to Texas, are a bit irritated after losing consecutive games to Kansas (5 points) and Texas Tech (1) after a 15-game winning streak.

As the second third of conference gets started, it’s a nice little gut check for the Horns, who have blown some sizable second-half leads against national title contender Duke and conference beatables Baylor and Oklahoma State, all away from the Erwin Center. At 12-6 overall and 3-3 in the Big 12, they have shown marked improvement over last season’s 11-win debacle.

The Big 12 waits for no man or team, for that matter. It’s the best league in the country from top to bottom with five teams currently occupying spots in the Top 25, including two in the top 10.

The Horns aren’t one of them. But here’s the good news. Texas, which finally held on to a late lead against a ranked team with a nice bounce-back win over No. 8 Tech on Wednesday, will have ample opportunity to become a ranked team over the next 12 games due to the sheer volume of competitive teams in this league.

It’s a tall order, especially with the realization that the team will be without its best guard Andrew Jones, who is battling leukemia.

The Horns, with an RPI of 41, can make the NCAA Tournament with a .500 record in this conference. Getting there is another matter. With Bamba and Dylan Osetkowski leading the way, they are better overall though the team’s perimeter game is far from consistent.

In a college game largely dominated by guards, the Horns are more dependent on their bigs and their defense than most teams. The formula has worked at times and faltered at others. Texas is the lowest scoring team in the league at 73.1 points per game and the least proficient in three-point shooting, making only 30.4 percent of its attempts. The 6-11 Bamba and the 6-9 Osetkowski are Texas’ barometer on this team while the schools atop the standings — Kansas, West Virginia, Texas Tech and Oklahoma — are more guard-dependent.

West Virginia point guard Jevon Carter, the conference’s reigning defensive player of the year, embodies the tough-minded spirit that coach Bob Huggins has long preached. He’s the head of the snake on West Virginia’s patented full-court press. The guards can’t be careless with the ball if they want to have chance to steal one at the end.

“They’re really really tough-minded and we’ve got to be ready to match that,” Smart said.

Shaka is right on when he says the Mountaineers will aim to test Texas’ resolve early. The best way to beat a second straight top-10 team is to feed Bamba — who should still be getting more than 9.1 field goal attempts per game — early and often and hope Osetkowski, Kerwin Roach and Eric Davis continue to knock down timely jumpers. Bamba, while still raw on offense, has largely been underutilized. His 156 attempts are second on the team but just eight more than point guard Matt Coleman, who is more of a pass-first floor leader.

It may seem simplistic and old fogy, but the Horns’ best chance to get its first Big 12 road win over a ranked conference opponent in nearly two years can only come with Bamba becoming as involved on offense as he is on defense, where he’s the best post defender in the country for my money.

Most teams play outside-in, but Texas isn’t most teams. The Horns should go through their bigs and allow the guards to play complementary roles. If Bamba and Dylan O get off, a win is possible.

Bohls: Texas’ Roach comes to the rescue — thanks to the advice from a missing teammate

Golden: Horns back in the win column, but aren’t forgetting WVU blowout