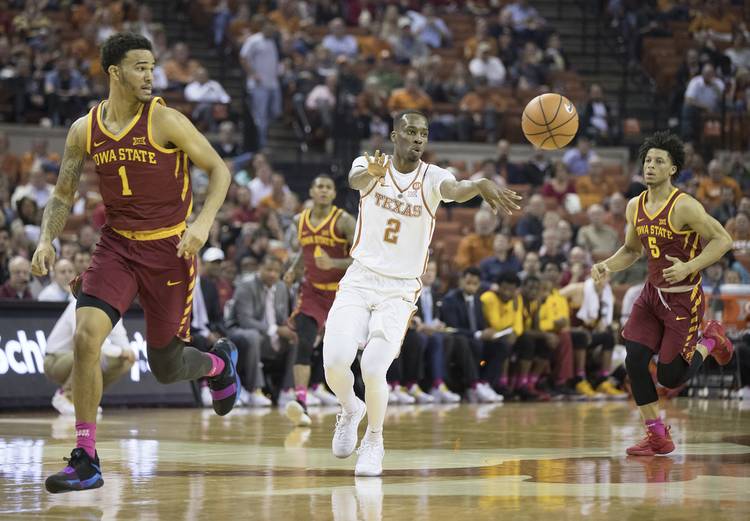 He merely placed it in the To Be Examined Later folder.

Two days after the worst beatdown of his Texas tenure, the college coach took a cue from some of his friends who coach in the NBA, aka The Land of Back-to-Backs.  Normally Smart would put the team through three hours of game film the day after a loss of this sort  but with just one day between games, he decided to shelve the WVU carnage for later.

It worked. Texas followed its 35-point loss at No. 7 West Virginia with a 73-57 bounce-back win over Iowa State Monday.  The issues that led to arguably the most embarrassing loss of his coaching career still remain but he can coach his team with a much more critical eye with a win under its belt.

Road teams were 10-25 in Big 12 play entering Monday’s games and West Virginia, which lost at TCU, was 10-1 overall at WVU Coliseum. So Shaka’s Horns, who just started winning on the road this season after whiffing in that area in 2017, had to be in responsive mode with such a quick turnaround. Simply put, the Horns knew a home loss to the last-place Cyclones would have been much worse than anything that happened in Morgantown.

Thanks to Mo Bamba and the sizzling Snoop Roach, who hit four first-half triples en route to 22 points, there was enough offense to take out the Cyclones.

The much-needed win evened them up at 4-4 in conference and also provided Smart with plenty of time to break down how Texas was brutalized up north, particularly over the last 12 minutes where the Mountaineers outscored them 41-16. Texas gets a little rest from the Big 12 beehive with a home game against Ole Miss Saturday before it returns to conference action at Texas Tech Jan. 31.

It’s a good time to find some water for those recurring dry spells.

Scoring droughts for this offense are like rain in Seattle. We know it’s coming. We just don’t know how long it will last. Texas scored two points in the last 8:51 of the first half at West Virginia and on Monday the Horns went scoreless for a second-half stretch of 5 minutes and 22 seconds. You can get away with it when you’re the conference’s third-ranked defense playing the second worst offense in the league but on most nights, that can be a real problem, especially for the league’s lowest scoring team.

“It’s pretty self-inflicted,” said Bamba, who had one of his best games with 24 points, 12 rebounds and three blocks. “As you saw in the first half, (the Cyclones) were not changing anything defensively. It’s just us, we get real tense.  Coming out of the last media (timeout), I said, ‘This is not happening again. We’re going to keep the same tempo and the same fight.'”

In Monday’s case, Smart said it was by design to be more deliberate even though a pair of second-half possessions ended in ugly fashion on consecutive possessions with the Horns forcing up a couple of hurried three-pointers to beat the shot clock.

Smart, a former college point guard, is placing a huge responsibility on the freshman shoulders of Matt Coleman who is still trying to figure out when he should floor the gas pedal and when he should ease up on the throttle. When you’re offensively challenged, the point guard has to be the smartest player on the floor when it comes to clock management.

At one point late in the game with Texas up eight points, Coleman got the ball after a defensive rebound and came roaring up court at full blast with four Iowa State players already back on defense. Smart signaled for him to slow it down and work some clock.  By now you’ve already guessed that Coleman will be front and center for that West Virginia tape viewing.

“It’s one of the biggest areas where we need to get better and grow and it starts with Matt,” Smart said. “Sometimes he gets a little too cool. He’s got to focus on the smallest details offensively and make sure we got those right and that goes a long way. I want us to be aggressive and run when we have the lead. You have to strike the balance between running and attacking in transition if you have something really good and if not, run the clock.”

In the end, West Virginia happened and Texas bounced back.

Moving forward, Smart’s job is to make sure that West Virginia tape doesn’t morph into a growing collection.