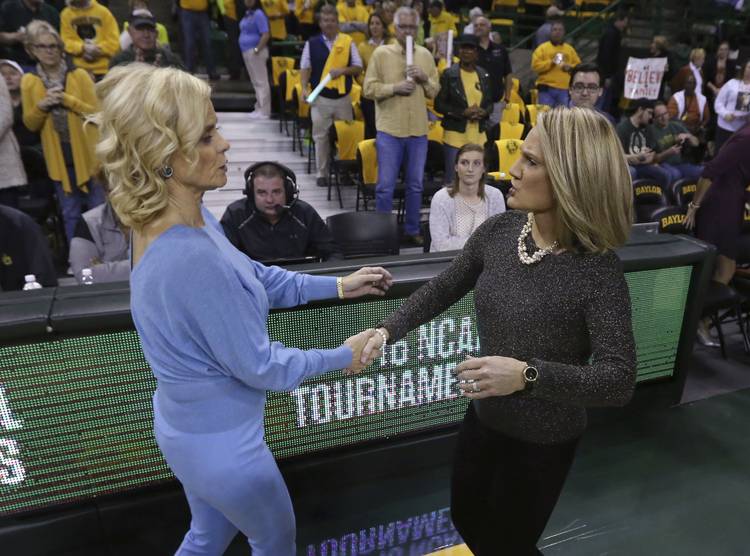 WACO — To borrow from Franklin D. Roosevelt’s first inauguration speech amidst the Great Depression and to take a few liberties, all Texas has to fear is Baylor itself.

Except maybe the fear of having to play ‘em again. That doesn’t sound all that inviting either.

The Lady Bears showed up with a 14-game win streak, a chip on their shoulder for an preposterously-low No. 3 seed in the early projected seedings by the NCAA selection committee, and with both love and pain in their hearts over the loss of beloved former player Chameka Scott on Sunday to colon cancer at age 33. And they showed up as one terrific basketball team. One of Baylor’s best.

And a damn good coach, too — arguably the best in the business not named Geno Auriemma.

Kim Mulkey’s got the scoreboard to prove it. Two national championship banners hang overhead. She’d rather win those than popularity contests any day, not that she’s at any risk to win the latter.

“My son told me everybody thinks you’re the meanest woman in the world, and I said, ‘Don’t tell ‘em any different,’” Mulkey said. “That’s my competitive edge. My kids just laugh. Reporters will call me Cruella de Vil, and I go ssshhhh. I’m competitive. I’m passionate. When I lose that, I need to go get in my rocking chair.”

Now Aston has resurrected this proud Texas program, restored a tremendous amount of street cred and has the Longhorns on the brink of big things. But they are just in the neighborhood. They’re not running things, and face-plants like Thursday night’s point out some flaws in this guard-centric team that is vulnerable to off shooting nights and opponents’ strong front courts like Baylor’s.

And Aston has to be able to get better shots for Brooke McCarty and Ariel Atkins, who went a combined 8 of 30, and has to prod Joyner Holmes to get closer to the basket than the perimeter where she too often resides, and has to stoke the fires of Jatarie White. Baylor has the better team and the league’s best player in 6-7 Kalani Brown and showed it in an 81-56 rout that wasn’t pretty.

At 15-4, Texas isn’t far off, but it’s losing to the teams it needs to beat like UConn, Tennessee and Baylor if it ever hopes to get back to the Final Four for the first time since 2003.

Mulkey primarily attached the 5-11 Kristy Wallace on the 5-4 McCarty and let Atkins and Lashann Higgs drive into the Baylor forest in the lane. The scheme worked to perfection.

The Longhorns are so much better than they’ve been in the last two decades, and Aston deserves a world of credit for it. But to take Texas to the level she wants it go, the Longhorns have to avoid embarrassing debacles like this one and stand up to Baylor. Sure, shocking the Lady Bears in their own backyard a year ago represented clear progress, but Baylor returned the favor at the Erwin Center and has now won 16 of the last 17 in this so-called rivalry.

For it to be a legitimate rivalry, Texas has to get off the mat more than once. And maybe it will when they meet again in Austin on Feb. 19.

It has to burn Aston to no end to keep losing to a coach she used to work for, and it doesn’t help when Mulkey needles her with thinly veiled comments like she made this week when the Baylor boss said Texas “has the most talent in the league and the most depth in the league.” And still got blown out by 25 points.

So does that mean it comes down to coaching, Sheriff Mulkey?

“I wouldn’t touch that with a 10-foot pole,” she said. “I didn’t dribble tonight. I didn’t pass. I didn’t shoot. All I can do is make a few suggestions. We’ve won championships where I’m the greatest coach in America and lost to people we shouldn’t have lost to, and I can’t coach.”

Mulkey can coach. So can Aston. They gave each other the perfunctory handshake following the game and moved on.

The Longhorns came into Ferrell Center, which resembled one big Lady Bears pep rally, eager to measure themselves against a 17-1 Baylor team. They limped out, wounded and intimidated.

This one wasn’t close. This one seemed lopsided almost after a quarter. Baylor led it wire to wire and once again reminded that the Big 12 is Baylor’s league until further notice.

Texas didn’t show up and got smacked around, whipped in nearly every category, and this one was on Aston. She simply has to do better. She didn’t have her team prepared for this onslaught it faced.

So were the Longhorns scared?

And it’s getting old.

Aston’s proven she can recruit players. Now she has to coach them up.

She literally has twice as many McDonald’s All-Americans on her roster (10) as Mulkey has (5) with another two such decorated players on the way to campus. Of course, two of Mulkey’s five are among the best players in the country in the incomparable Brown and 6-4 Lauren Cox, a sophomore in the same class as Texas’ Holmes.

“So how good are we? I think we found out tonight we’re pretty good,” Mulkey said.

Not that that has been a secret.

Golden: Horns back in the win column, but aren’t forgetting WVU blowout