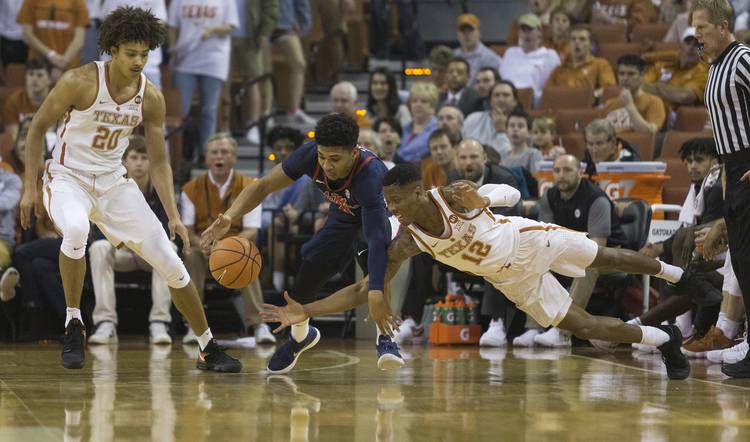 Is Kerwin Roach II on a hot streak or has he just figured some things out in his junior year?

It’s a little bit of both.

Snoop is on his way to establishing himself as one of the best two-way guards in college basketball, eager to take on the most challenging perimeter assignment each game while understanding his team’s need for outside shooting, especially with the absence of starting two-guard Andrew Jones.

Remember when some thought he would miss significant time with that broken hand? No, me neither.

He hasn’t backed down from his new responsibility.  His emergence is right on time for a Texas team looking to establish some momentum in the money part of its schedule. Mo Bamba and Dylan Ostekowski became the obvious  top two offensive options after the team announced that Jones was battling leukemia, and many didn’t expect Roach would become such a reliable part of this offense.

“Snoop is playing at a different level,” Bamba said. “He’s been more aggressive. He’s picking and choosing when to drive and when to shoot. And his jump shot … you can tell we’ve gotten in some reps. It looks pretty good. It’s not as a good as mine, but it’s good.”

Well, Mo, if you’re  scoring from home, Roach has the slight edge in 3-point shooting percentage (.345 to .270), but it’s all love since the Longhorns can say they have won two games in a row for the first time in more than a month.  The Horns notched their 14th win Saturday, an 85-72 decision over Ole Miss at the Erwin Center in the Big 12/SEC Challenge.

They’ve earned some needed momentum going into tough matchups next week against Texas Tech and Oklahoma, which will bring star guard Trae Young and ESPN’s “College GameDay” to the Erwin Center next Saturday.

Roach finished with 16 points, two rebounds and five assists, a stat line that is well within his grasp in most games these days. A few weeks ago, we could have described him as being on a hot streak, but it’s becoming quite apparent that he is capable of putting up these numbers on a consistent basis.

Roach hasn’t been perfect in his first three seasons. He has been hit with a couple of suspensions and has struggled to find his on-court groove at times, but the player we’re seeing now is a product of those tough lessons. He has started to embrace his role as both a teammate and a more mature presence in that locker room.

“I just try to relay my experience to everybody else and just be a leader,” he said. “I’m one of the oldest people on the team, and I’ve been through a lot, and I can relate to all of them and just tell them anything. They (have) open ears.”

Roach is popular in the locker room, especially with his 6-foot-11 center,  the first person he looks to get involved in the offense. A pair of Bamba dunks came off Roach feeds Saturday. Bamba finished with 25 points and 15 rebounds.

“Snoop scratches my back down on the offensive end, and I scratch his back on the defensive end,” Bamba said. “We kind of just work off that. He’s super easy to play with. He’s actually an underrated passer. He doesn’t get nearly as much credit for how well he passes the ball.”

Roach started on fire  with a nifty drive to the bucket and consecutive 3-pointers to give his team some early momentum. Coach Shaka Smart believes Roach is part of a locker room that is hoping to take advantage of some good team chemistry. Now, whether that adds up to some more made shots for the league’s worst scoring offense remains to be seen.

“Snoop is playing with a lot of confidence,” Smart said. “It looks like his hand is feeling better, which is good. We just want to keep him attacking and aggressive and, while he does that, making the right read – do I shoot or do I pass? – and he had a nice balance of that today.”

Add to that the work he’s putting in on the other end. There’s a growing list of guards who haven’t played their best with Roach in their face this season. He held Alabama’s Collin Sexton, a projected top-10 lottery pick, to eight points on 4-of-12 shooting in Texas’ biggest road win over the season. That came one month after he held Duke’s Grayson Allen to 4-of-11 shooting in a game the Horns should have won.

Roach’s athleticism and size (6-4, 180) might garner some attention from NBA scouts, but he isn’t really talking about any of that. The program has a history of players who have been drafted based on their defensive ability. Names like Royal Ivey, Avery Bradley and Cory Joseph come to mind.

“We have a top-three draft pick on our team who doesn’t talk about it, so why would anyone else talk?” he said.

For now, he’s settling into his role. He’s a comfortable No. 3 option in an offense looking to take the next step in the nation’s top conference.

Golden: Joyner Holmes in the paint is a better fit for Texas