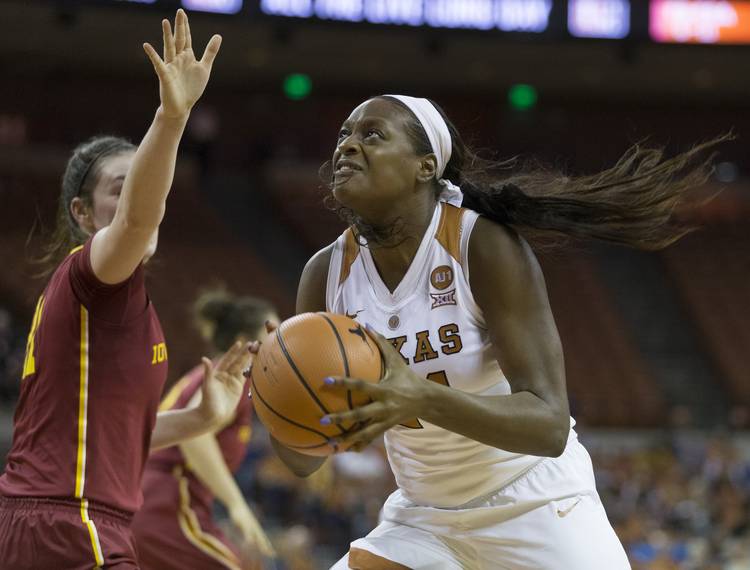 Joyner Holmes is listed as a sophomore guard-forward on the Texas roster.

It’s time to take ‘guard’ out of her job description.

Karen Aston has plenty of guards at her disposal and most of them are pretty adept at knocking down jump shots, which isn’t Holmes’ long suit.

If that beatdown at Baylor taught us one thing, it’s that the Horns could use some more size underneath. The 25-point loss was a not-so-subtle reminder that a good big team will usually beat a good small team in the women’s game, especially a smaller team that doesn’t fully utilize its size. Baylor bigs Kalani Brown and Lauren Cox blitzed Texas for for 34 points and 21 rebounds that night, by the way.

Saturday’s bounce-back 87-55 win over an outsized Iowa State team was expected — maybe not by the record margin of victory — but expected nonetheless. It also provided some evidence that the 6-foot-3 Holmes, who was held to three points and six rebounds in Waco, can make a much bigger impact as an interior player rather than out on the perimeter, where she has struggled with her jumper since she got here.

Her latest game was different in that she didn’t settle for jumpers. She took the ball to the rack with great aggression and played with the energy this team could really use in the front court. Her first attempt came at the rim. She missed but it was a high-percentage attempt. Aston will take it.

Early in the second quarter, Texas actually ran a play for Holmes on the block. She made a sweet pass to Jatarie White, who missed, but the play was one that Texas should have been running for Holmes from the moment she walked on campus.

This wasn’t the Holmes we saw in Waco, the one who was far too respectful of of the Baylor bigs. She finished with 12 points and 11 rebounds in 19 minutes — her first double-double of the season — and provided a nice lift to posts Jatarie White and Audrey-Ann Caron-Goudreau, who combined for 24 points and seven rebounds.

When asked about the emphasis on playing in the paint, Holmes said. “I think it’s just recognizing our matchups. They had some smalls on us so it was taking advantage of our matchups and trying to score inside out and in the paint.”

Translation: ‘I went inside because I’m bigger than them.’

This is where Holmes must grow mentally as a player. She has to be tough enough to understand even if she is giving up height to someone like Brown or Cox, she is still tons more athletic than either one and can blow past them to the bucket. Yes she is a great passer with natural playmaking skills but she has to realize she’s a much better fit as an interior presence in this offense.

That’s where coaching comes in. Aston must impress upon her young charge to be more like Candace Parker and less like Diana Taurasi. She must implore the sophomore to do what’s best for this team and that’s play big.

Holmes has likened herself to Kobe Bryant in the past but she is a poor outside shooter. She has the talent to develop a jumper in time but for now, she should go into every game in attack mode This team needs her inside. Brooke McCarty, Ariel Atkins, Lashann Higgs, and Sug Sutton are plenty capable of handling backcourt duty.

“As I’ve said for the thousandth time, this is a process for Joyner,” Aston said. “As she goes along, every day is going to feel better for her. At some point she will feel comfortable again and she will get back to the motor running all the time and physical play and not shying from contact and all of that.”

As she matures, Holmes will grow into her skill set and take full advantage of her natural gifts. She made it look easy against the Cyclones and it was. It won’t be so simple when Baylor visits Austin in three weeks but she shouldn’t make it easy on Baylor either. Not too long ago, she scored 20 points and grabbed 10 rebounds in a win at Baylor. That same player averaged 12 points and eight rebounds over her freshman season.

While a suspension has hindered her development — her fault all the way — there is plenty of time to make her stamp on a team that can potentially make it to a Final Four.

“If this was the moment that sort of flipped the light back on for her, that’s great but I think we also need to understand there will be some moments where she’s trying to get a feel and get timing,” Aston said. “I think it’s two-fold. It’s a mentality for her and for me it’s maybe just some recognition that there’s certain things that we can do offensively that will put her in a place where she’s comfortable.”

Better put, it’s time for her play in  a place where she has been uncomfortable for much of her college career.