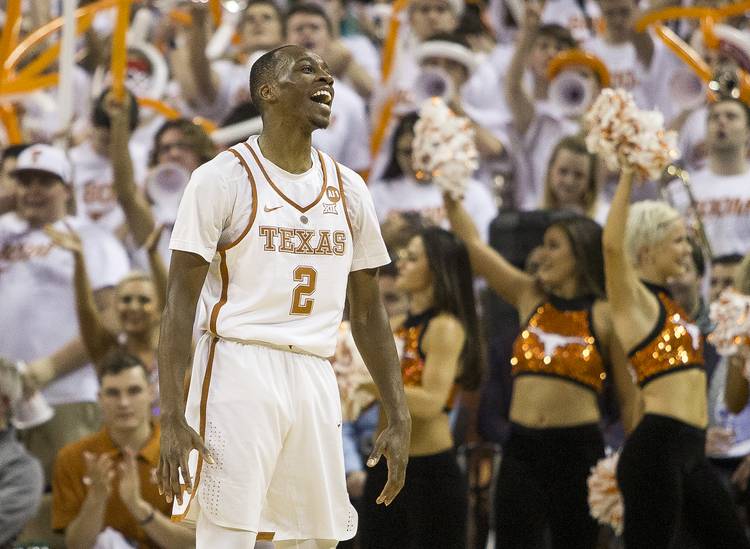 But the three missed free throws in succession by the freshman point guard that helped cost Texas a badly needed road win over the Red Raiders are all but a distant memory now that Coleman redeemed himself with his best game as a Longhorn in a 79-74 upset of OU.

“He showed he’s got a lot of guts,” Shaka Smart said in the Erwin Center hallway after his team’s perhaps signature win of this season. “He’s got good guts. Some guys have got smelly guts, but he’s got good ones.”

They were on display in front of a jam-packed area, a national television audience, 15 or so NBA scouts and a 12th-ranked opponent that probably has the national player of the year although Young didn’t exactly embellish those credentials. Oh, Young showed up all right with a 19-point, 14-assist game, but it’d be hard to argue that Coleman wasn’t the best player on the floor on this night as he frustrated Young, drove with abandon, was on fire from the perimeter and, oh yes, was a perfect 4-for-4 from the line.

“As a point guard, you have to have the face of confidence,” Coleman said, “so others can feed off you.”

This game was critically important to the 15-8 Longhorns’ chances of stamping an NCAA Tournament bid because they now hold wins over Top 20 teams like Texas Tech and TCU. And very nearly a pair of victories over Texas Tech.

That didn’t happen, and Coleman takes full responsibility for the 73-71 overtime loss to the Red Raiders when he clanked those free throws and then fouled out even though Texas remained ahead by four with a minute to play. Coleman was visibly distraught as was his teammate and best friend, Mo Bamba, who Smart said were sobbing in the locker room.

Crooner Mac Davis wasn’t the only one who once sang that happiness was Lubbock, Texas in his rear-view mirror. The Longhorns couldn’t get out of town soon enough either. But when they landed in Austin at 2 a.m. in the middle of Wednesday night, Smart made sure he drove Coleman to his dormitory.

“Mostly,” Smart said, “I wanted to make sure he didn’t jump off the top of the building.”

Not only was Coleman searching for the tallest building. He hustled over to Denton Cooley’s practice gyms and shot free throws one after another. Make 10 in a row. Then do that three times in a row. Rely on muscle memory when he hit four consecutive free throws to win a game as a sophomore for Maury High School back in Virginia. Remember he was hitting 80 percent of his free throws in Big 12 play.

Finally, he and teammate Joe Schwartz went and found breakfast at 4:30 in the morning.

“The biggest thing would be responding,” Coleman said. “Coach asked me how I felt, and I said I felt like (bleep) if you’ll excuse my language. But Coach knows I want the ball in my hands. I rock with him. He rocks with me.”

Few know the mental makeup of his players better than Smart does Coleman. He first laid eyes on the precocious guard when he was a wise-beyond-his-years eighth-grader and fell in love. Heck, when Smart was introduced as Texas’ new coach in the spring of 2015, he called to recruit Coleman before his first press conference.

That’s how the coach got in on the ground floor and won over his point guard, who wears the same No. 2 as Smart’s VCU defensive star Briante Weber whom he idolized. Coleman left his Norfolk, Va., home and eventually chose Texas over Duke and Stanford although he also had offers from Virginia, Kansas, Florida and Syracuse.

So what did Smart see in Coleman as a middle-schooler?

“Swagger,” Smart said. “He was always in charge. He ran the show.”

Cool, but not too cool that he doesn’t sweat the details. Coleman has always emulated Chris Paul and played AAU ball as a 14-year-old, mixing it up with 17-year-olds and never backing down. He’s still running the show and starting to figure things out although no one’s tougher on Coleman than his mother Devona. Not even his dad Clifford, who coaches a junior-college basketball team.

“Matt has a lot of people who are hard on him,” Smart said. “First and foremost, his mom. She is on his tail, and that’s what makes Matt so great. They set the bar very, very high.”

Smart may have to raise it after Saturday. He knows Coleman’s had clunkers against Duke and down the stretch against Oklahoma State, and Smart said he “was horrible” with six turnovers versus Tennessee State.

But he did hit the game-winning shot in that game. He matched up well with star Collin Sexton to help Texas beat Alabama. And he was simply spectacular against OU.

“Each one of those games, he can take and put it in his pocket,” Smart said. “Matt’s not afraid. And he knows he can do it again. And now he’s got Feb. 3 against OU.”

Golden: Joyner Holmes in the paint is a better fit for Texas

Golden: Texas signed just one running back — Carthage’s Keaontay Ingram will show us why