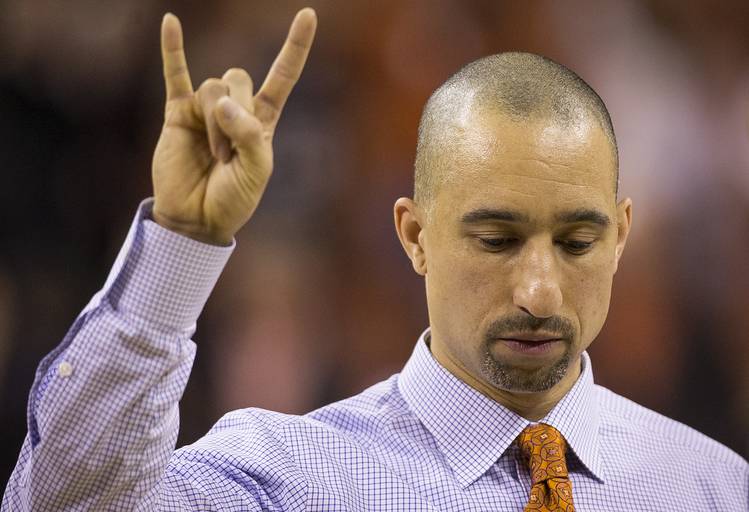 Texas head coach Shaka Smart looks to the floor while standing for the playing of The Eyes of Texas following his team's 67-64 loss to Kansas State in a NCAA college basketball game in Austin, Texas, on Wednesday, Feb. 7, 2018. NICK WAGNER / AMERICAN-STATESMAN

Texas has a toughness problem. And it has little to do with the physical.

That starts with him. He has to figure out why. And in a hurry, please.  March is approaching.

The Texas men (15-9, 5-6 Big 12) sit in sixth place in the rugged Big 12. It’ll be a dogfight to get into the NCAAs and the leaders on this team — especially the head coach and his staff — had better find it from somewhere else or Smart will join Charlie Strong as a splash hire for UT who missed the postseason two years in a row. I’m thinking Smart doesn’t want to go down that road.

Mental toughness and veteran leadership can carry a team with tired legs and a tired psyche though difficult times. The Horns haven’t shown enough in that area over the last month and the result is a 6-6 record over the last 12 games. Worse yet, the Horns just haven’t handled success well. Since that big road win over Alabama on Dec. 22, Texas is 1-6 in games following a win.

“I think first of all, one of the things that really, really good teams do and winning teams do, is they have a good result and they say ‘That was good, but we want more,'” Smart said after Wednesday’s disappointing home loss to Kansas State. “That’s something I was really trying to put front and center for these guys coming off Saturday. But at the end of the day, we didn’t display that tonight.”

Shaka knows more than most about the psychology of a young student-athlete. He lived it as a player and he studies it as a coach. The job now is to figure it out why his team is so easily seduced by the temptress that is success. Better yet, he has to solve why his team doesn’t embrace the importance of bringing a healthy dose of desperation into every game. It’s his job to reach them and it’s their job to carry out the plan with full confidence and high energy.

Texas didn’t resemble a team that needed a win in that 67-64 loss to unranked Kansas State. Meanwhile, the Wildcats walked into the Erwin Center like those big tigers that nearly tore Maximus to bits in “Gladiator.” Salivating. Hungry. Angry.

“I felt that our spirit wasn’t there all the way,” point guard Matt Coleman said. “We didn’t have enough energy going into the game. That comes from within and they wanted it more than us.”

Mental toughness is the ability to overcome obstacles. The listless Longhorns were so deficient in this area that their coach looked as if he wanted to throw up after the game. Smart was visibly frustrated and shared a bit of it with former UT coach Tom Penders in the interview room.

Who could blame him for being nauseous? When you look at the halftime stats and see Dylan Osetkowski and Snoop Roach — who entered the game averaging a combined 26.5 points — have zero points and six turnovers, despair can take over the proceedings. To their credit, Osetkowski and Roach showed up in the second half. But big dog Mo Bamba, who scored 15 first-half points, allowed defenders to push him out of the lane and he was reduced to a 6-11 jump shooter not named Kevin Durant. He finished with only three points in the final 20 minutes while his teammates fired away from long-range, making just 4 of 16 three-pointers in the second half.

“We have to be tougher inside and seal deeper,” Smart said when asked about Bamba’s lack of interior presence on offense.

Kansas State was a decent team, but Rolando Blackman and Mitch Richmond no longer play in Manhattan, so for that group to walk into the Erwin Center and hand a loss to a bigger, more physical Texas team should have Smart concerned about where his Longhorns are headed. Or maybe not headed.

Let’s keep it real here. How much does it take get amped up for the national player of the year candidate Trae Young and the rival Oklahoma Sooners with ESPN’s television trucks parked outside your home arena? Pretty easy.

Texas was electric in that win and the players fed off the crowd. But when you replace Young with some no-name guys from the Little Apple, the motivation has to come from within. Texas didn’t have it and the fans noticed.

The Horns are at a crossroads. TCU remembers that missed layup that led to an overtime loss in Austin one month ago to the day and the Frogs, who are 1-3 in their last four games, have all the motivation they need because they can forge a tie with Texas in the middle of the pack with a win.

Remember that 1-6 record after wins since the Alabama game? The Horns are  5-0 following a loss over the same span. If ever there was a time to continue a trend, it’s now.

At least for one game.

Bohls: Will Texas’ Tom Herman be calling his own number when it comes to calling the plays?

Bohls: Texas’ Shaka Smart is angry, but there’s plenty to go around