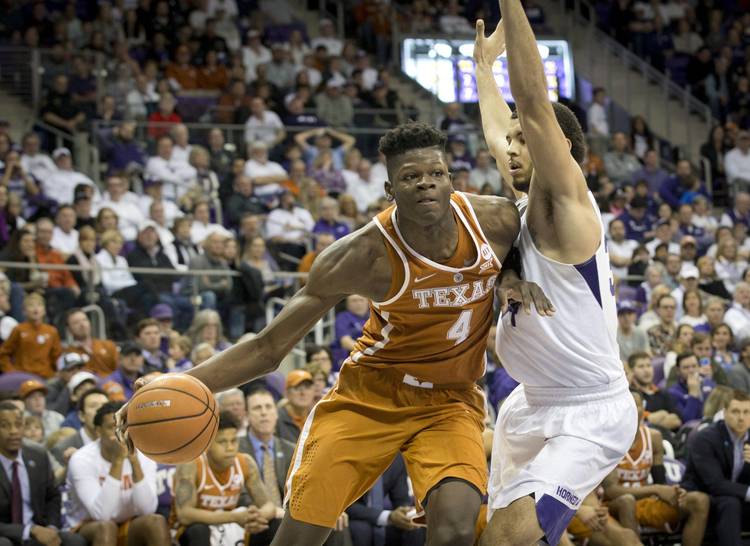 FORT WORTH — So, Shaka Smart, are you angry?

“Yeah,” he said in the hallway of Schollmaier Arena about an hour after his Texas basketball team fell to TCU 87-71 with a dreary, dispirited performance in which the Longhorns never led. It was the type of loss that conjures up the not exactly far-fetched notion that his Longhorns might miss the NCAA Tournament for the second straight year.

Did you tell your team you’re mad since your rage wasn’t very visible?

“Yeah, I did,” he said, albeit with almost an eerie calm.

But then the reserved, cerebral Smart always is calm. In fact, he might be the King of Calm. Maybe he should borrow a page out of Bobby Knight’s playbook and throw a potted plant at someone or get a couple of technicals and get ejected. Punch a wall. Stomp your foot. Anything.

And what words did he use to relay his reaction to one of his team’s worst games of the season as Texas allowed TCU 23 assists and forced a mere six turnovers? The Frogs didn’t have a single turnover until 13.8 seconds left in the opening half.

The printable words he could share reflected major “disappointment” in the direction this 15-10 team is headed after back-to-back losses on the heels of what was thought to be a signature victory over Oklahoma. Smart’s team autographed a pitiful showing on the road against one of the nation’s best offensive teams, which got very little resistance from Texas.

Smart basically challenged his players to search inward and decide who they want to be as they start the crucial month of February with a 1-2 record after suffering Texas’ most lopsided loss to TCU since 1987.

Consequently, while UT falls squarely on the bubble for the NCAA Tournament in a four-way tie for sixth place in the Big 12, Smart is searching for the right buttons to push to dredge up some degree of passion and intensity. Even worse, he has to worry that the team has no clear identity.

Texas’ last three opponents have shot better than 52 percent and victimized the Longhorns with transition offense, back-door plays, putbacks and easy dunks. The Longhorns rank sixth in the nation in defense, according to Kenpom.com, but they look nothing like a truly lockdown defense such as, say, a Virginia. All those blocked shots by Mo Bamba count but obscure some deficiencies.

Granted, the top four players in Smart’s seven-man rotation are all freshmen, but that’s partly a result of recruiting lottery picks such as Bamba and Jarrett Allen. And he had the tragic loss of guard Andrew Jones, who is battling leukemia.

But a disillusioned fan base is ready to see a more finished product out of Smart. He was considered a no-brainer of a hire but is looking more like Charlie Strong 2.0 of late with a 46-45 record and no NCAA Tournament wins. Now the whispers have begun that he might not be the guy to rescue this program, although he’s been unlucky with injuries and is in no danger of losing his job after this season.

For now, this team is going nowhere. With six games remaining, it has to close strong to have any hope of the postseason.

Just to finish 8-10 in the Big 12, rely on the strength of the No. 2-rated conference and hope against too many midmajor tournament upsets, the Longhorns will have to find three more wins. But they have to come from road games against Kansas, Oklahoma and Kansas State and home matchups with West Virginia and streaking Baylor, which knocked off the Jayhawks on Saturday.

“My job as coach is to expose the things that went into us winning or us losing,” the third-year coach said. “Our guys are going to need to get together right on the bus and make a choice. Right now that’s not who we want to be.”

Smart said he tried to pinpoint the areas where the Longhorns were lacking. They squandered one of their better shooting games — they shot 52 percent and made half of their 20 3-point tries — because they failed to guard the Horned Frogs, refused to block out on the boards, allowed too much dribble penetration and didn’t close out on perimeter shooters.

“I wish I knew,” said Bamba, the only Horn who played reasonably well, especially offensively with 23 points.

Dylan Osetkowski remains in a funk. After a terrible game against the Wildcats, he hit just one bucket in six tries Saturday and accepted the blame.

That goes for the lot of them, who have to rally around one another, play more cohesively and passionately, and stick to the defensive fundamentals that Smart and his staff stress daily.

Otherwise, they’re staring the NIT in the face and another long offseason of question marks and skepticism. It’s enough to make a head coach angry.