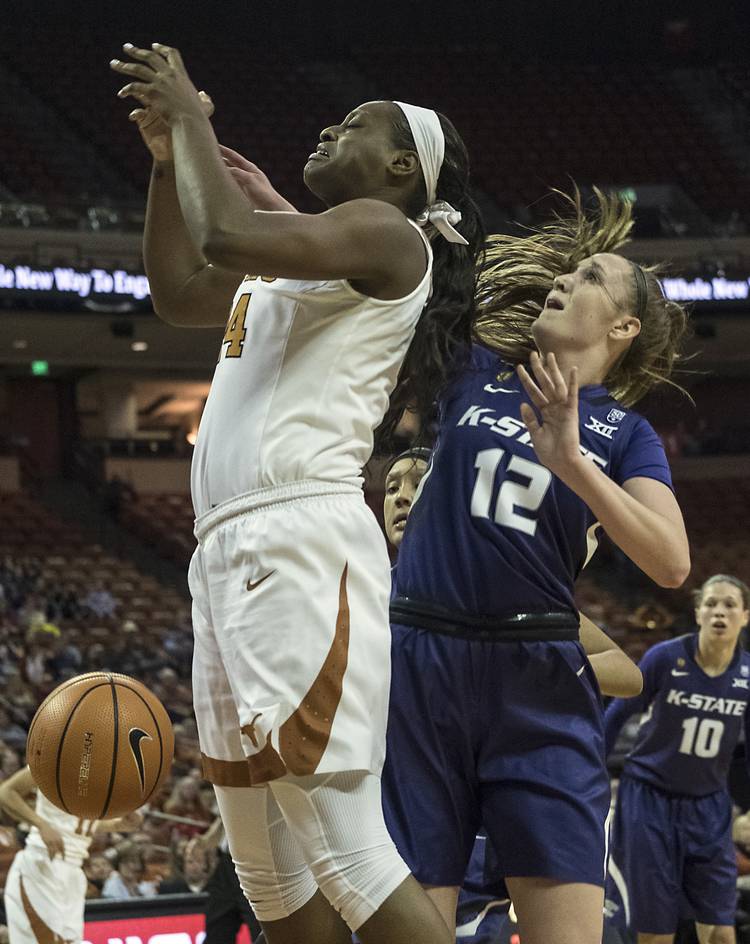 Joyner Holmes, the lane is yours.

If you want it.

When post Audrey-Ann Caron-Goudreau went down with a wrist in injury right before the half of Saturday’s win over Kansas State, Holmes, the 6-foot-3 sophomore, took her place. Caron-Goudreau brings her hard hat to work everyday but isn’t in Holmes’ class athletically. With that said, she knows her role on this team, something Holmes has struggled to grasp in her first couple of seasons on campus.

The Texas guards made a concerted effort to force-feed Holmes on the block in Saturday’s 76-54 win over Kansa State and she delivered with 11 points and seven rebounds in just 16 minutes. She also displayed a commitment to using her size against the smaller Kansas State post defenders.

“I’m very confident in anything that Joyner can do,” point guard Brooke McCarty said. “I  think it comes from yourself so when she’s confident, we’re all even more confident in her.  She can bring a lot to the team.”

It was her fourth double-digit performance in the last five games and a sign that she is finally realizing her game is much more suited to the lane than the perimeter. That’s a large step to someone who idolizes Kobe Bryant, who made his living shooting jumpers, especially late in his career.

Holmes still loves Bryant but she also understands that what worked for the Mamba doesn’t necessarily translate to her skill set.

“The last few games Joyner has started to assert herself and do some of the little things we need to her to do,” coach Karen Aston said. “More than anything, she has asserted herself more one foot from the bucket in the paint.”

If Caron-Goudreau has to miss significant playing time — the 20-4 Horns shouldn’t need her against last-place Texas Tech Wednesday — Holmes is more than capable of providing an extra spark to a team that’s been playing up to its No. 6 ranking since that embarrassing 81-56 loss at Baylor last month.

“I think I can contribute in any way possible whatever my team needs,” Holmes said. “All props to Audrey. She’s been doing well this season on the offensive side and the defensive side. Just picking up her slack, it will be tough but I think I can fill her role as best as I can.”

The Horns aren’t scaring anybody in the paint but the trio of Holmes, Jatarie White and a healthy Caron-Goudreau should be able to deliver 20 points and 20 rebounds on most nights.  It’s not the 35 and 20 Baylor is getting from bigs Kalani Brown and Lauren Cox but if Holmes and Co. can deliver a 20-20 clip, there are enough difference makers in the backcourt to make Texas dangerous come tournament time.

To Holmes’ credit, she has worked to establish herself as in interior player and has cut down on the number of jump shots she is taking. That’s a good thing for this offense since it’s the part of her game that needs the most work, right ahead of finishing more consistently in the paint. The put-backs and gimmes at the rim will go down with more regularity when the game slows down for her inside and that should happen with more rim reps. Expect that .322 shooting percentage to rise if she is truly accepting of the role that can best help her team win.

Add to that, her conditioning is much better since she came back from that academic suspension in December. The way she has played recently indicated that more minutes were already on the way. Caron-Goudreau’s injury just moved things along a bit. Even if she is back, look for more Holmes in the lineup.

“Her effort has really improved,” said Kansas State coach Jeff Mittie. “It looked to me like she is playing harder and making better decisions. She looks like she’s coming into her own.”

While Aston believes she is starting to find her offensive identity, she isn’t close to what she can be on the other end. That has to come from within. Offense is a pizza party. Defense is a 12-hour shift in a coal mine. The desire to do the dirty work, something Caron-Goudreau ably learned while backing up Kelsey Lang, will make Holmes a more complete player though it should be pointed out that she is just 48 games into her collegiate career.

She’s getting there and better yet, she’s developing a cozy little friendship as the season approaches money time.

It’s where this team needs her most.

Bohls: Texas’ Shaka Smart is angry, but there’s plenty to go around