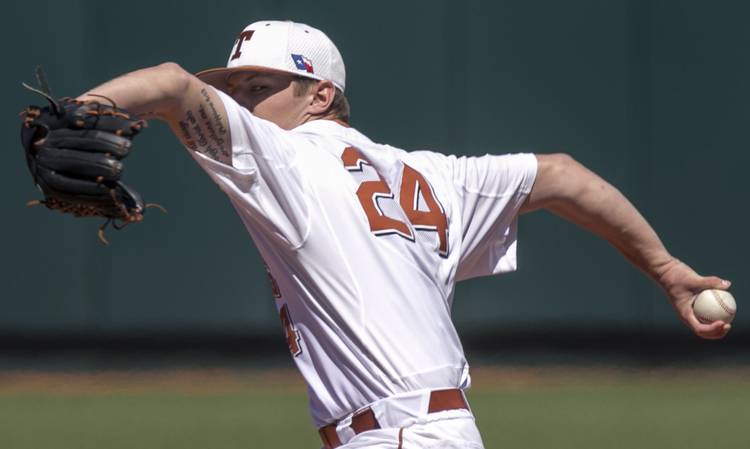 Texas' Chase Shugart is making the transition from reliever to the starting rotation. RODOLFO GONZALEZ/2016 AMERICAN-STATESMAN

Veteran relief pitcher Chase Shugart saw his name in the Texas baseball starting lineup for the season opener against Louisiana-Lafayette on Friday night, and he was stoked.

There he was listed in the seven hole. The starting designated hitter.

At least for a minute.

“Yeah, I saw that I was listed as the DH, and I was pumped,” Shugart said Saturday night. “I had my arm sleeve on and everything. But coach said, ‘Don’t get too excited.’ ”

Shugart was only in there as a situational DH before Longhorns coach David Pierce could decide whether to use a left- or right-handed bat in that position. Shugart never made it to the plate, not that he doesn’t know how to handle a bat. As a high school senior, he led the state in home runs with nine and carried a robust .564 batting average.

That was fine with him because he was in Saturday’s lineup to stay — as the starting pitcher, also a new role for the Texas junior. And he made his mark there, maybe not quite as dramatically as Austin Todd, who crushed a two-run home run over the left-field wall for a thrilling 5-3, walk-off victory over Louisiana-Lafayette, but every bit as critical.

Texas lost ace Morgan Cooper and five other pitchers to the draft last summer and is replenishing some of that depth by converting Shugart from a reliable long reliever to the No. 2 starter in the rotation behind Nolan Kingham. That gamble looks to be no gamble at all, as Shugart was dominant in his first career start.

Relying on his fastball and slider but mixing in curves and change-ups, he allowed only three hits and a single unearned run in 6 2/3 spectacular innings and put himself in position for a 2-1 win. That was until Texas unraveled in a two-run, ninth-inning Louisiana-Lafayette rally built on just one single (a bunt) and a whole bunch more bunts, only to come back strong in its last at-bat.

If anything, the blown save by closer Beau Ridgeway could ultimately turn out to be a better outcome because it provided the Longhorns the opportunity for their first walk-off win in two years and a much-needed victory in a tight game after a season in which an offensively challenged Texas scored one or two runs 19 times and won just two of them. The Horns finished with nine hits, three of them in the ninth, but now stand 2-0 as they go for a three-game sweep Sunday.

“I’d have preferred we’d win 2-1 and go to the house,” Pierce said. “But it was great to see our resilience after that brutal top of the ninth. And Chase gave everybody an opportunity to see what this kid can turn into.”

Maybe the next Kirk Dressendorfer, which is high praise indeed since he’s pretty much the epitome of a short right-handed power pitcher and a Longhorn legend. Like Dress, Shugart’s an undersized right-hander, probably a huge reason this Longhorn wasn’t drafted out of high school. Major league teams historically snub short right-handers, but the 5-foot-10 Shugart will use any slight to build an edge.

“I’ve heard that before,” Shugart said of the height criticism, “but that only fuels my fire. I’m going to act like I’m 6-9, and I’m going to fight you.”

He might be short, but he’s not short on swagger. He’s exactly the type of guy you want in the foxhole next to you, as competitive and bullish as they come. And after 61 career relief appearances, Shugart’s a bulldog with great fastball command who will fit in nicely behind Friday night starter Kingham, who overwhelmed the Cajuns with a 10-strikeout performance over eight shutout innings in Texas’ 3-0 win in the opener.

Shugart isn’t one to shrink from the spotlight. Or the pressure. In fact, he relishes big moments, just as he did with outstanding relief in last year’s NCAA regional tournament when Texas pushed host Long Beach State to the brink but couldn’t quite finish off the Dirtbags. His 3 2/3-inning stint in the Long Beach finale gave Texas a chance, but the Longhorns scored just five runs total in the two elimination losses.

“Chase is awesome,” said junior second baseman Masen Hibbeler, who has made his own presence known with six hits in two games. “I love his energy.”

Shugart certainly inspires a crowd, and why not? Half of ’em are related. By his count, he had about 30-strong at Disch-Falk Field supporting him.

“Yeah, they traveled four hours here,” he said. “My grandparents. My mom. An uncle. My girlfriend. Another grandparent. My stepmom. They travel heavy.”

It’s easy to see why. They’re eager to see this Bridge City product excel just like another rugged former Cardinal, Steve Worster, who became the greatest fullback in Longhorns history as a two-time All-American on two national championship teams. Maybe the Big Woo will give way to the Big Shu.

“I’ve met him before,” said Shugart, who played quarterback and safety in high school. “He’s very down to earth. I really look up to him as a legend. He did a lot of good things here.”

As has Shugart. Just not as a DH.