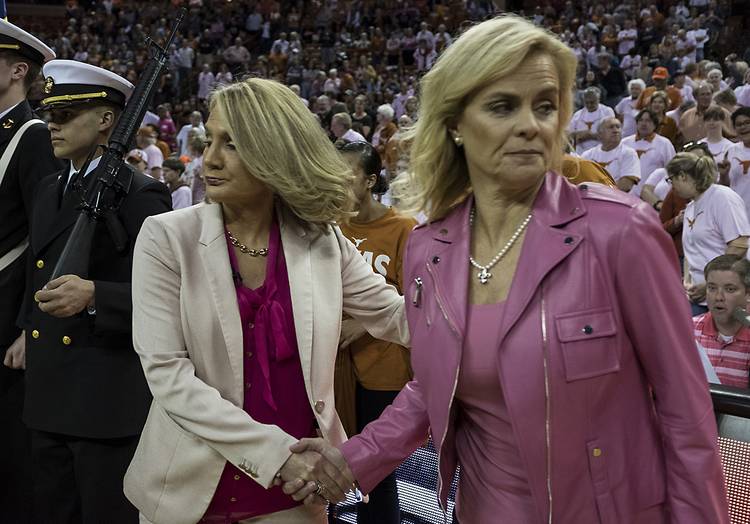 While her players soaked her pink leather jacket with water in the visiting team’s locker room after the 93-87 win gave Baylor an eighth straight Big 12 regular-season title, Texas’ Karen Aston bristled when it was suggested that her team, which is 22-5 overall and 13-3 in league play, wasn’t elite.

The fire in Aston’s belly to beat Baylor burns bright. The fire to beat Mulkey? That surpassed inferno status long ago.

Aston wants it, but she hasn’t figured out Baylor or Mulkey for that matter. She’s had amazing recruiting classes with two handfuls of McDonald’s All-Americans — including program-changers Brooke McCarty and Ariel Atkins — and four straight seasons of 20-plus wins. It hasn’t been enough for a Big 12 takeover.

The Horns are good, but not elite. Not yet.

Aston’s struggles against Mulkey are similar to what Mack Brown went through in his five-year winless drought against Oklahoma’s  Bob Stoops. While the Sooners competed in three national championship games from 2000 through 2004, winning one, the Horns were highly ranked but didn’t play for a championship until they vanquished Oklahoma during that 2005 championship season.

Aston may not agree, but she needs a breakthrough before Texas can get to that elite level. Since she arrived here, the Horns are 68-38 in conference play. Good.

“I have a hard time saying that we’re not (elite),” Aston said.  “We’ve gotten beat by really good teams.  I don’t know what you define as elite. I think we’re an elite team. Maybe I’m missing something.”

Let’s start with some wins over the best program in the conference. Aston’s teams are 1-12 against Baylor, which makes any talk of a real rivalry a misnomer. She pointed to Texas being competitive after that 81-56 no-show in Waco last month, but being competitive doesn’t equal being elite; the Horns have led for a grand total of 15 seconds in the two games these teams have played  this season.

The Longhorns have widened the gap between themselves and the other teams the league, but Baylor remains ahead of them. Mulkey has taken a peek or two over her shoulder, but she hasn’t felt Texas’ breath on the back of her neck in a while. It’s still Baylor’s show.

Another requirement for elite status? Hardware. Texas is still searching for its first title of any kind under Aston, be it regular-season or the conference tournament. An Elite Eight appearance sounds good, but it’s not the Final Four. The teams atop the national rankings — top-ranked UConn, Mississippi State, Baylor, Louisville, and Notre Dame — have all been to season’s biggest weekend since 2012 and account for five of the last six national championships. Seventh-ranked South Carolina won it all last season.

Until Texas makes it to the Final Four or breaks Baylor’s stranglehold on the conference, Aston’s claim of elite status will fall on deaf ears. Are the Horns good enough to get there? They’re capable, but it will take a friendly bracket, which means avoiding teams like Baylor that can dominate them on the interior.

Texas showed it can score Monday night, but the Lady Bears got far too many uncontested layups and offensive rebounds. Then there was Texas assassin Kristy Wallace, who has averaged 25.0 points against Texas this season but only 11.9 against everyone else. She went for 23 points.

Worse yet, Baylor’ best player, 6-7 post  Kalani Brown, was saddled with three fouls early in the third quarter and Texas could muster only a one-point lead. For some reason, Aston was hesitant to double-team Wallace and she made Texas pay with 14 points in the quarter.

Aston insists Texas was more competitive, but it wasn’t the kind of competitive where you ever thought Baylor was in any danger. It was more like the Lady Bears knew they couldn’t take their foot off the pedal. It took a monster 16-point fourth quarter from McCarty to make the final score respectable.

Meanwhile, a giddy Mulkey  joked that it was celebratory champagne on her jacket and not water. We knew better.

“I don’t drink,” she said. “I’ve never had a drink in my life. Coming from Southern Louisiana, that’s hard to believe but I put many a drunk to bed.”

Her program’s dominance is one sobering reality for the local team. Aston has rebuilt this program from the ground to  top-10 status, but it’s a results-based  business and there just aren’t enough at this point to earn the elite tag.

Until then, the Longhorns are a simply a good program with a good coach still looking to take that next big step.

Bohls: Texas’ Chase Shugart short, but not on swagger or results