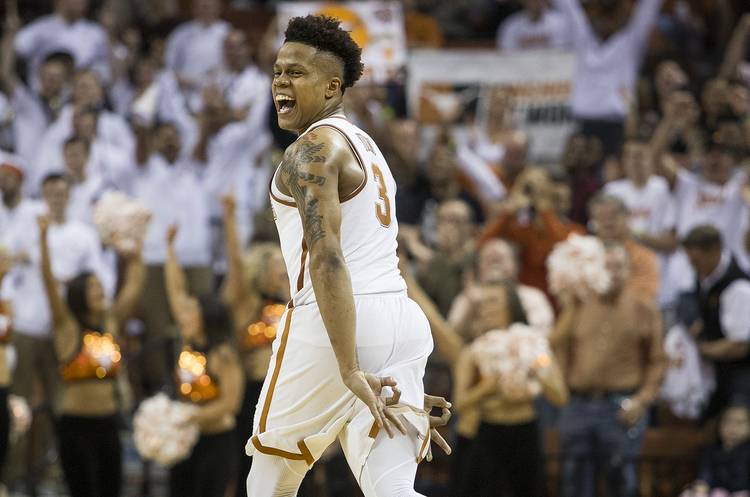 Texas owes it’s still-breathing status not only to Kerwin Roach II who beat the buzzer and Oklahoma State Saturday but also to a pair of unheralded role players whose minutes have increased lately.

Roach’s ‘Snoop Scoop’ saved Texas’ season for the time being but there is much work to be done, and if the Horns are to find a away to sneak into the NCAA Tournament in what’s been a tough campaign to say the least, they will need production from some unlikely sources.

Jacob Young and Jericho Sims weren’t at or near the top of the Texas pecking order at the beginning of the season and still aren’t. The sophomore shooting guard, the son of Phil Slama Jama royalty and the mild-mannered freshman power forward from Minneapolis knew they would take a backseat to names like Mo Bamba, Andrew Jones, Dylan Osetkowski, and Kerwin Roach but time and circumstances have moved them up a couple of notches on what’s left of the depth chart.

If this up-and-down season has taught the Texas Longhorns anything, it’s to be ready when your number is called.

Meanwhile, coach Shaka Smart has tried every conceivable lineup to get a spark going, but Texas continued on this bumpy ride since conference play started. Eighteen games have come and gone and Texas has yet to put together a two-game winning streak.

Thanks to illness, injury, and Yahoo Sports, Shaka’s lineup decisions have become much easier since Texas is razor thin in depth. We’ve all followed Jones’ battle with leukemia and hope it’s not career-ending. Big-man Bamba has been battling a toe issue which has limited his explosiveness on both ends of the floor. He missed the second half Saturday.

Junior guard Eric Davis is not playing pending a school investigation of a Yahoo report where he is alleged to have received a $1,500 loan from a runner for the ASM Sports agency.

With Bamba out, Sims got it done against the Cowboys, with some nice turnaround jumpers and much needed energy on the defensive end. His 11 points, including a bucket that put the Horns up late, not only made not having Bamba a bit more bearable but allowed the Horns to be in there to steal one late.

“This isn’t the first time that Mo has been out,” Sims said. “My coaches and teammates always teach me to step up and fill that gap.”

Speaking of gaps, Young capably filled in the one left by Davis as the first guard off the bench on Saturday. Smart has belief in him but has had to reel him in at times because he rarely switches gears, preferring the go full blast with the ball. Plus, a player that was brought in to provide long-distance shooting is making only 28.6 percent of three-pointers. That percentage hasn’t stopped him from launching them, by the way.

“He eats, sleeps and breathes this game and he comes from a family with multiple NBA players in it ,” Smart said. “There’s a high standard there.”

The standard is high but the numbers haven’t been. Still, he put those struggles aside and gave his team 12 points — his fourth double-digit performance in 25 games — in a season high 28 minutes against the Pokes.

“My preparation was really the same,” Young said. “I prepare every game like I’m going to play 40 minutes. That’s how I came up.”

With regular-season games remaining at Kansas Monday and home against West Virginia Saturday, the 17-12 Horns ( 7-9 in the Big 12) go into Kansas a double-digit underdog that many expect to get run out of Allen Fieldhouse. If you thought Killmonger gave the Black Panther all he could handle, it’s nothing compared to Kansas’ dominance over the Horns — an eight-game winning streak that dates back to 2014.

Smart knows it’s a tough task without some key cogs, but he’ll take a puncher’s chance over no chance.

“The guys that we have on the floor, that’s all we have,” he said. “We have to come together and stay together and each guy has to to do a little bit more.”

I’ve long maintained that 8-10 would get the Horns into the tournament. This is what it comes down to: can they figure a way to scrape out one more with a group that’s starting to resemble more of a skeleton crew that a basketball team?

All hands are on deck, including the two that helped keep them in contention for the moment.

Bohls: Huston Street, 34, is as competitive as ever, but finds himself on retirement’s doorstep