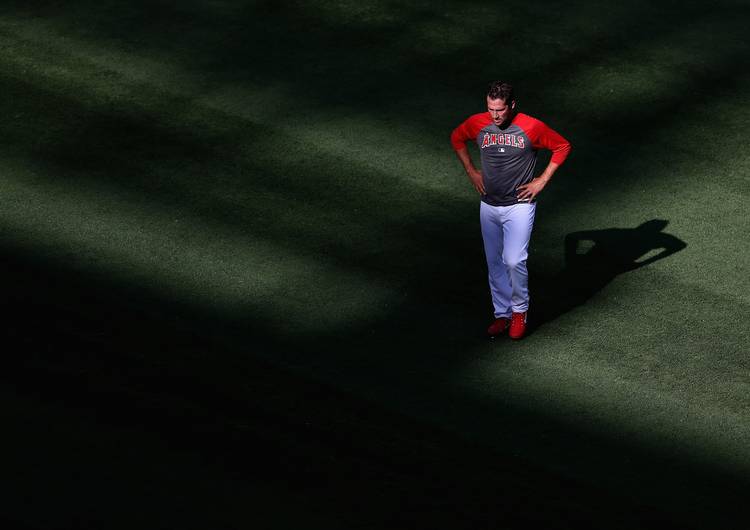 Huston Street of the Los Angeles Angels of Anaheim walks in the outfield prior to a game against the Toronto Blue Jays at Angel Stadium of Anaheim on April 21, 2017 in Anaheim, California. He announced his retirement that week. (Sean M. Haffey/Getty Images)

He’s been playing baseball since he was 6 years old. It would have been 5, but those silly Western Hills Little League rules mandated kids had to be 6 by July 31 to qualify, and his birthday was Aug. 2.

So Huston Street waited a whole year to play for Buddy Dryden’s Cincinnati Reds. He made up for lost time because he’s been playing baseball ever since. At the highest level.

Almost three decades later, the former Texas Longhorns great is shutting it down.

PHOTOS: From Westlake, to the 40 Acres, to the big leagues: Huston Street through the years

After 13 major-league seasons, one of the top closers in the game told the American-Statesman on Monday at his beautiful 11,000-square foot home that sits on his beloved Lake Austin that he is all but announcing his retirement.

But with one exception. Even though Street’s balky shoulder hurt so badly as recently as November that he couldn’t even lift a bag of groceries, the 34-year-old right-hander said he plans to get into shape, continue to rehab and see if a winning team might want him at midseason. Emphasis on the winning team. After playing on losing teams for all but four seasons, he’s tired of losing.

“I think losing is an absolute waste of time,” the bearded, tanned Street said. “Other teams are willing to sign me (to minor-league, make-good contracts). Losing teams. But I don’t want to BS anybody. It’s February, and I’m not ready. But if the phone rings, I want to be prepared.”

In fact, Street talked to A.J. Hinch, the manager of the defending world champions, about that very thing, as well as new Hall of Fame inductee Trevor Hoffman and Rockies manager Bud Black.

But his dad once told him the day will come when “you have to make your children’s dreams your dreams.” The appeal of retiring and raising his three sons with his wife, Lacey, and tending to businesses as diverse as commercial real estate and wine-trading and part ownership in the South Congress Hotel may be too great for him to continue what has been a glorious career.

Glorious, but not ultimately successful. He never won a World Series, but knows he won’t get back some of these precious days from his three boys ages 7, 5 and 2, and he’s conflicted about a final decision.

He talks of “balance in life” a lot. He glows as he watches Ripken and Ryder eating chocolate donuts and playing hoops in his driveway with Lacey, who was an all-state volleyball and softball player from Sugar Land. But this is a guy who was so smitten with Lacey that he phoned her 60 days in a row before she relented and called back. “The guy doesn’t quit,” Lacey said.

Huston’s big heart is tugged in different directions. Winning means that much to him, and in a perfect world, he’d join the Astros in late summer and help them toward a second title. He and his wife even bought a house in Houston last summer, a week before Hurricane Harvey hit, so you know he’s given this some thought.

He just hates to leave the game. He won rookie of the year. He was twice an All-Star. But he pitched on just four playoff teams and has never thrown a pitch in a World Series game.

But this could be it for him. That notion won’t leave him after days like Sunday when he coached Ripken — who’s named after Troy Tulowitzki’s dog, by the way — in his flag football championship game. His undefeated Thunder Monkeys lost, their first loss in three years. But Ripken had his dad’s bum shoulder to cry on. What price do you put on that?

“He cried his little eyes out on my shoulder,” Street said. “That was his first experience with losing. If I was in baseball, I would have fielded ground balls yesterday, maybe covered first base 30 times, but I wouldn’t have been there to explain to my son the value of losing. If you want to be the best baseball player in the world and the best dad in the world, you just can’t.”

The agonizing decision may make itself. Street ranks 17th in major-league baseball history with 324 saves — just 44 away from the top-10 all time — but is coming off two of his worst seasons ever. And most painful. He’s never had Tommy John surgery, but pulled groins and calf strains and knee problems debilitated him enough that he pitched in just four games last season and endured multiple cortisone injections after having just two such shots in his first 11 seasons. That’s how bad he wants to win.

Not that that is anything new.

This is a Longhorns athlete, who if he didn’t succeed his legendary father’s exploits at Texas at least matched them with a decorated career that included the school’s all-time saves record of 41 and a three-year, All-American résumé paced by his MVP status for a College World Series champion.

James Street never lost one of his 20 starts as a Longhorns quarterback and we’re still waiting for his own statue at Royal-Memorial Stadium for breaking Arkansas Razorbacks hearts everywhere and pacing Texas to its second national championship.

Oh, Huston could still pitch and draw a solid salary, but he’s made more than $68 million in his career. He’s had some lowlights, like his postseason with the Rockies after a golden 2009 regular season when he blew only two saves. He kinda remembers the fastball that the Phillies’ Ryan Howard crushed off him and the 2-2 change-up that Chase Utley didn’t chase in that playoff loss.

“It doesn’t ruin my day,” he said, laughing, “but it pisses me off occasionally.”

Still does. Oh, and that first season with the Cincinnati Reds in Little League. How’d he do?

Bohls: Karen Aston’s streaking Longhorns in it for long haul