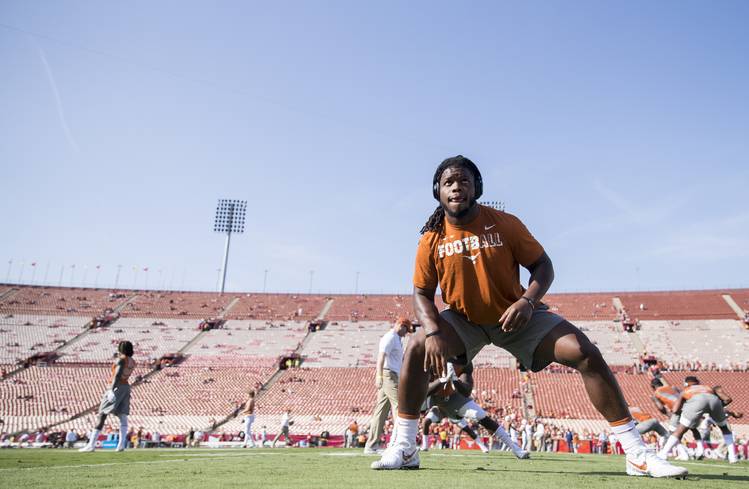 Texas linebacker Malik Jefferson (46) warms up against USC at the Los Angeles Memorial Coliseum on Sept. 16, 2017. RICARDO B. BRAZZIELL / AMERICAN-STATESMAN

Run like the only brother in the first 10 minutes of a horror movie.

Run like the wind, headlong into the first two rounds of the NFL draft.

The annual NFL scouting combine is fun for football junkies but it’s also an overcooked meat market of sorts. Over one weekend in Indianapolis, 330 prospects are measured from head to toe, poked and prodded in all areas in between, drilled in countless interviews conducted by team executives, and tested with physical and mental drills.

For 21-year-old Malik Jefferson — one of six Longhorns in Indy — his draft future is largely contingent on one event: Sunday’s 40-yard dash.

RELATED: All eyes are on the quarterbacks at the NFL scouting combine

Jefferson went with his gut when scouts gave him that dreaded “go back to school” draft grade, their recommendation that he not turn pro after his junior year. Jefferson is on the short list of the most intelligent student-athletes to come through here in the last couple of decades — Justin Blalock, Drew Stubbs, A.J. Abrams and Huston Street come to mind — so when he decided to leave, I knew it was a decision that did not come overnight.

“I had to do what was best for me and my family to put food on the table,” he said on our On Second Thought podcast last week. “At the end of the day, we go to school to go pro.”

Jefferson is 22 hours of short of earning a bachelor’s degree, but the heart wants what the heart wants. He also knows the risks that come with playing football over a long period and the stories of players who have suffered brain damage after long careers. It’s why he didn’t take the decision lightly, speaking with his family and coaches before announcing his intentions.

“It was very hard,” he said. “I had the opportunity to come back and be the leader of the team and do some things to make the program great again, but I feel like you go to college to win championships and of course maximize your potential to become a pro. Once that opportunity shows, you take advantage. It’s a risk, but you do whatever you can to make sure you’re ready.”

Jefferson is one of six Longhorns at the combine. This is a crucial weekend for offensive tackle Connor Williams, running back Chris Warren III, cornerback Holton Hill, safety DeShon Elliott and punter Michael Dickson, too. Every one of them is leaving school early.

For some players, like Georgia linebacker Roquan Smith, the decision to turn pro is a slam dunk because he’s generally regarded as the best player at his position in the country. For Jefferson, it’s different. It’s even worse when scouts tell you you’re better off staying in college. Depending on which mock draft you’re checking out this week, Jefferson is projected to go anywhere from the second to fourth round.

“I love the way (Jefferson) plays,” NFL Network draft analyst Mike Mayock said earlier this week, “but he’s going to have to be an off-the-ball linebacker in the NFL. Because of that, I think he’s had some trouble getting off big bodies. I think he’s more of a third or fourth round guy.”

So run, Malik, run. Run like Usain Bolt lent you his legs for the weekend.. Clock between 4.5 and 4.6 seconds and analysts like Mayock will amend their projections. Run fast enough and your name could be called on the first day.

Jefferson has been working out with former Texas teammate Poona Ford, who was a surprising omission from the combine invitation list, at APEC, short for ACCELERATE Performance Enhancement Center in Fort Worth. He’s getting the sort of results that bodes well for the most important weekend of his career. Trainer Bobby Stroupe posted a video this week of the 240-pound Jefferson completing what was reported to be a 40-inch vertical jump.

The Big 12’s co-defensive player of the year has athleticism that has drawn comparisons to Eagles linebacker Jordan Hicks, a Texas ex who went in the third round of the 2015 draft, and just like Hicks, Jefferson will earn points for his intelligence.

Anyone who has been around him for more than two minutes knows the guy would be successful in any vocation outside of football. He speaks like a head of state and carries himself like a junior executive being groomed to run the company. With that said, his legs will ultimately determine his spot in the draft but he will wow the pants of any executive who sits him down for an interview.

If the banged-up toe that caused him to miss the Texas Bowl is sufficiently healed up — Jefferson said it’s 95 percent — he will participate in every drill this weekend, the most important of those coming Sunday when he runs the 40.

“I will blow up that track,” he said.

This year’s NFL scouting combine runs through Monday at Lucas Oil Stadium in Indianapolis. Here’s a day-by-day schedule for drills, including players from the Big 12 and other state schools. TV coverage is on the NFL Network:

Bohls: Karen Aston’s streaking Longhorns in it for long haul

Golden: Connor Williams helped his NFL cause at the combine, but will he be a pro tackle or guard?