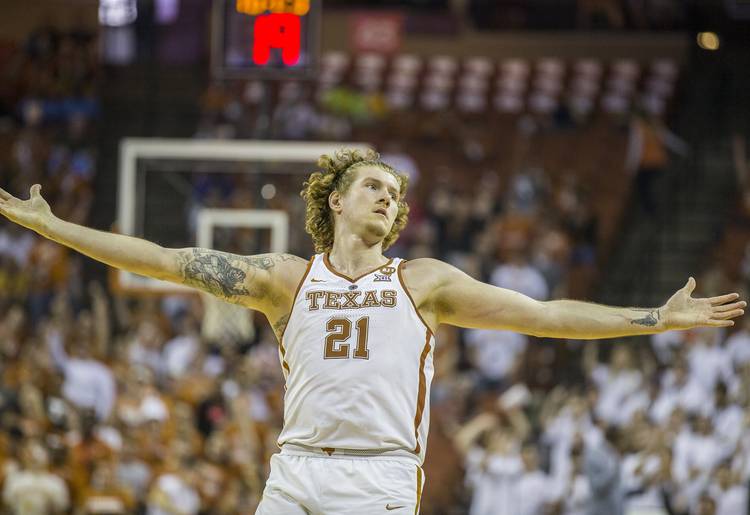 Texas forward Dylan Osetkowski (21) cheers on the crowd aft scoring a three pointer late in the second half Texas wins against West Virginia 87-79 in the NCAA Game on Saturday, March 3, 2018. RICARDO B. BRAZZIELL / AMERICAN-STATESMAN

Texas proved it still has a little fight left in ‘em after all.

And to make sure, the Longhorns head basketball coach on Friday night showed ‘em some clips of a real boxing match between Micky Ward and Arturo Gatti from a couple decades ago.

Shaka Smart called the “Legendary Nights” documentary about the three fights between these two sluggers that were all-out wars in the ring his all-time favorite. And why not. The feisty, third-year Texas coach did his share of boxing in a suburb of Madison, Wis., growing up and figured his ploy could help motivate a team that really needed to answer the bell.

“I showed the guys about 10 minutes of one of their fights,” Smart said. “Both of them would never say die. They were scrappers. And I told our guys we’d have to play four 10-minute rounds, and we’ve got to win a majority of them. I thought our guys took a real fighter’s mentality. And it went a little longer than that.”

It took until overtime for Texas to deliver the knockout blow in an 87-79 must-win upset of 20th-ranked West Virginia in the regular-season finale at the Erwin Center Saturday.

And it had to get off the mat to do so, failing to close it out in regulation when Mountaineers star Jevon Carter snaked through the Longhorn defense for a game-tying layup with less than two seconds remaining.

Texas did exactly that, getting a pair of threes from Matt Coleman and Jacob Young and just enough free throws to hold off a West Virginia team that finished second in the Big 12 and likely will get a four seed in the NCAA Tournament. That’s the same tournament that Smart’s bunch will likely play in, even with an 8-10 league record that probably serves as the bare minimum for an invitation although the Longhorns would be well-served to win a game or more in Kansas City at this week’s Big 12 tournament.

That group will delve into Texas’ metrics that include an average 18-13 record but . And consider that Smart won on Saturday with a makeshift lineup that included two new starters in freshmen Jericho Sims and Jase Febres and was missing its best shooter in Andrew Jones (leukemia), its best big man in Mo Bamba (toe) and one of its top guards in Eric Davis (suspension).

Those may seem like excuses to some, but Texas’ fight on Saturday before a raucous crowd was exceptional. This hasn’t been a good shooting team all year, but it managed to sink 11 treys, seven in the opening half.

“There’s a bunch of people not near as talented as they are,” West Virginia coach Bob Huggins said. “They’re like everybody else. When they make shots, they’re pretty good. And when they don’t, they’re not very good.”

When a reporter reminded Huggins that Texas has been a poor shooting team all season, Huggins cracked, “And they weren’t very good for a lot of the year.”

That’s true. The Longhorns haven’t won more than two games in a row since late January when they beat the Big 12’s worst team, Iowa State, and 12-18 Ole Miss, which has already fired its coach. Momentum for Texas has usually come in the form of an 11-0 run in overtime, not consecutive victories, but the locals showed a ton of resilience and fortitude against a West Virginia team that smoked them by 35 in Morgantown, W.Va. Smart knows fight when he sees it.

Smart said when he was about 12, he and three friends began a “pseudo boxing club” with the full complement of gloves in one of their backyards. The third time out, one friend smacked another’s jaw with a solid right. “We all heard a pop,” Smart recalled. “We thought, ‘Oh, no.’ It wasn’t broken, but we never boxed again.”

But he loved seeing the fight in his young team that started three freshmen and one junior transfer. The gifted Sims — whom Kerwin Roach II calls the “most athletic player in the country”  —  had his best game as a Longhorn with 17 points and eight boards, Young made several key plays and three Texas players stayed on the floor for 43 minutes or more. That included Roach, the junior leader who helped keep Carter in check and had eight big assists along with 22 points, both tying career highs.

“It’s a good relief because we got the weight off our shoulders,” Roach said. “We needed that win, not only for our post-season dreams, but for our team. We knew it’d be a fight. This time we refused to get knocked out.”

So did Smart, who pulled out all the stops in probably his biggest game as a Longhorn coach. He could ill afford to miss out on the NCAA Tournament two straight years, especially since Bamba is clearly headed to the NBA as a lottery pick.

He remains “hopeful” that Bamba will play in Kansas City and beyond. That and this team’s inner fight just might give Texas a puncher’s chance at success.

Golden: Connor Williams helped his NFL cause at the combine, but will he be a pro tackle or guard?