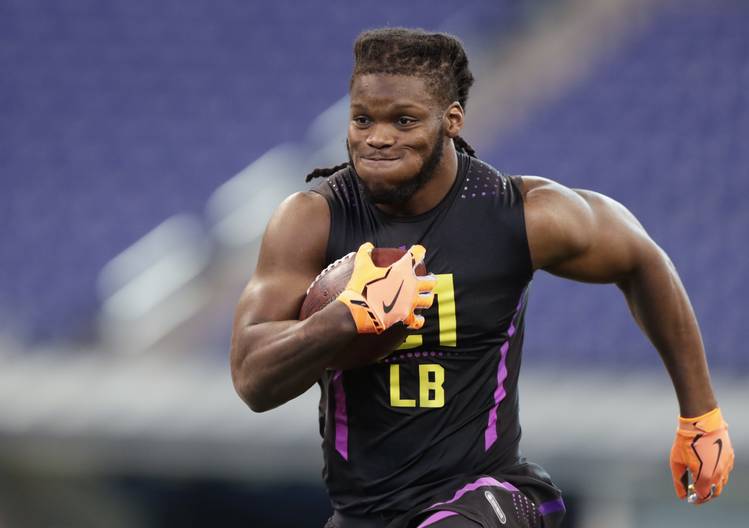 INDIANAPOLIS — Malik Jefferson came to Indianapolis to prove himself.

It’s the whole reason for the annual NFL Scouting Combine, where the best college athletes come to get noticed.

Take a look around humongous Indianapolis Convention Center and it’s a circus of sorts from the thousands of fans milling around hoping to get a glimpse of the athletes, to a beautiful black lab named Olive whose sole purpose in life is to detect drugs in a laptop bag.

Between this place and the neighboring Lucas Oil Stadium – aka The House that Peyton Built  – an athlete could actually get caught in the giant-sized expectations that accompany the NFL Scouting Combine. Jefferson doesn’t have those kind of problems. The former Texas linebacker has always carried himself with the maturity of someone much older than this 21 years. He addressed the media Saturday with the confidence of a 12-year league vet, not a rookie who played his last game at Mesquite Poteet HS less than four years ago.

Jefferson is actually this enjoying this atmosphere even it is a meat market of sorts.

“I think this is pretty cool,” he said. “The meat market quote is kind of realistic but at the same time you have to appreciate where you are. Not a lot of guys get to do this. To be in front of a crowd on national television with people watching, I’m soaking in the moment and realize the blessings I have received.”

Jefferson did have an interesting line of questioning during his interview with one NFL scout.

“I got antagonized about if I drink or smoke and they thought I was lying,” he said. “I denied it of course.”

There’s no denying that Jefferson put in some great work. His calling card is his athleticism and in an event that rewards great athletes, he had himself a one fine weekend at the Combine.

Most teams are looking at him as a inside backer but Jefferson said some see him moving around some. At 6-foot-3, 236 pounds, he presents an interesting option, especially after he did what was expected of him in individual drills, including a 4.52 in the 40-yard dash, a great time for a player of his size. While some scouts have said he is a little stiff in the hips when switching directions, Jefferson looked smooth as silk in individual drills over at Lucas Oil.

One scout told me Jefferson has plenty of upside because of his athleticism but that lots of growth will have to happen before he can become a complete player.

“They will use him to blitz a bit but pass coverage is his weakness,” the scout said. “There aren’t that many players that come into the league with the ability to play all three downs. Right now, Malik is one of those guys who will be on he field for the first two downs until he learns to cover better.”

Everyone agrees, including Jefferson, agrees that if he is to succeed on this level, he will have to add to his bag. His two biggest Longhorn confidants — NFL linebackers Derrick Johnson and Jordan Hicks — have reputations as three-down players. The three spent plenty of time together in Austin over the last three offseasons and Jefferson made sure to ask them plenty of questions.

“Just seeing Malik around campus over the years, I think he’s very mature for his age,” Johnson said. “I was up there at the facility all the time and had plenty of talks with him. He’s very humble, especially when talking to the guys who came before him. Whatever I tell him, he treats it like gold. I say ‘do this and do that’ and he listens.”

“How much do you weigh?” Johnson and Hicks made sure to ask him daily. Linebackers know unnecessary weight can mean slipping off the depth chart behind while chasing running backs and tight ends.

“The two guys have been great mentors,” Jefferson said. “They have always taught me something. It’s been fun being around them and having them teach me the ins and outs of the league and how to take care of myself.”

Texas hasn’t had a linebacker drafted since 2012. Both players – Alex Okafor in 2013 and Jordan Hicks in 2015— have had successful careers. Jefferson compares favorably with Philadelphia’s Hicks, a great pursuer of the ball who has earned a reputation as a playmaker in his career, abeit while battling assorted injuries.

Jefferson hopes he did enough to get picked in the first round but he will likely hear his named called in the late second round at the earliest. He has already spoken with the Oakland Raiders, Los Angeles Chargers, Indianapolis Colts, and Houston Texans and had a formal meeting with Philadelphia Eagles, who have depth concerns at the position.

He has major potential and won’t be beset by personal issues that will make NFL success unattainable like it was for fellow Metroplex product Sergio Kindle, an incredible athlete who played well at Texas before off-the-field problems cut his pro career short.

Jefferson aims to go down a different road.

This weekend was a nice start.

Golden: On the final day, DeShon Elliott silences his critics at the NFL scouting combine