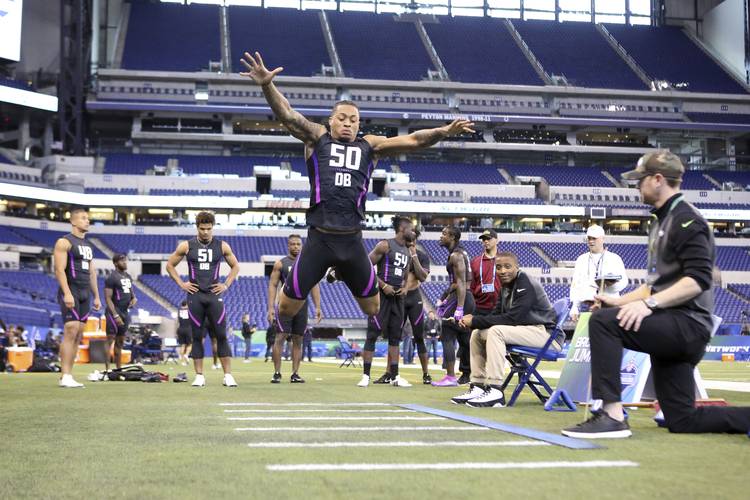 INDIANAPOLIS — DeShon Elliott had to leave early for the pros.

Despite a draft grade that suggested he return to Texas for his senior year, the safety called it a college career with one season of eligibility remaining. He made himself available for the NFL draft after a breakout year in coach Tom Herman’s first season.

The only way Elliott could show he wasn’t too quick to leave school is to show the scouts he’s a lot quicker on his feet than they believe him to be. Some don’t think he’s fast enough to be effective in the NFL. He’s never been a burner, but the 4.58 he ran in the 40-yard dash on Monday’s last day of the NFL scouting combine was more than enough jets to keep him in the conversation come the draft.

The 6-2, 209-pound playmaker wanted to parlay a spectacular junior campaign into NFL riches the same way Earl Thomas did when he left as a redshirt sophomore after Texas lost to Alabama in the 2009 national championship game. Elliott was a picture of confidence over the weekend and he put up some solid numbers on the bench press with 15 reps of 225-pound bench press, one more than Alabama’s Minkah Fitzpatrick, who beat him out for the 2017 Thorpe Award.

Elliott’s workout may cause NFL Network draft analyst Mike Mayock — who has been great on the tube this week — to change his perception of the the youngster. In a pre-combine conference call, Mayock tabbed Elliott as his sixth or seventh safety in the draft.

When told of Mayock’s projection on Sunday, Elliott’s expression didn’t change. “That’s his opinion, that’s your job to do — give his opinion,” Elliott said. “So, it is what it is.”

By the way, Mayock has Fitzpatrick listed atop his safety rankings with Bama teammate Ronnie Harrison listed third. Elliott didn’t mince words when asked about pass defenses in the SEC.

“Their DBs don’t really have to cover,” he said. “Their D-lines are huge and so much of the time they run. For us, all we do is cover. Every down we’re covering, they throw the ball 40 to 60 times a game. Let some SEC DBs come play in the Big 12 and they’re not going to last that long.”

His confidence in his conference notwithstanding, the case can still be made that Elliott took the biggest risk of the Texas players who could have returned for 2018:

Left tackle Connor Williams and linebacker Malik Jefferson have had their names pop up in the first round of several mock drafts though it wouldn’t be a shock to anyone if they slipped to the second round, and in Jefferson’s case, even later.

Michael Dickson is the best punter in the country and could have started for half the teams in the NFL last year. His decision was a no-brainer.

Elliott’s secondary mate Holton Hill encountered  enough potholes in his college career off the field that it was time for a change of scenery. The good news is scouts are already comparing Hollywood to all-pro corner Richard Sherman. The bad news is multiple college suspensions may relegate him to a late-round pick. Coming back to college wasn’t a smart option given his history.

Time will tell if Elliott made the right choice. Sometimes you have to swing for the fences and he decided against the safe route. He was never going to have another season stats-wise like this one, so he’s taking his shot, surely a surprise to some since he was a picture of patience his first two seasons. Elliott played the waiting game and worked on special teams for most of the 2015 and 2016 seasons while the Longhorns suffered through the two worst defenses in school history.

When he finally got his chance to be a full-time starter in 2017, he made the most of it by turning in the best statistical season for a defensive back since Thomas left town. He was a first-team All-American and nearly became the program’s third Thorpe winner. Along the way, he led the team with six interceptions and returned two for touchdowns.

Of all the potential draftables from Austin, Elliott may be the most intriguing study over these next couple of months.

“At first everyone thought I was going to be a bust because for two years (because) I didn’t see the field,” he said. “I was finally able to prove that not only to myself, but to everybody else.”

Now it’s time to prove himself all over again.