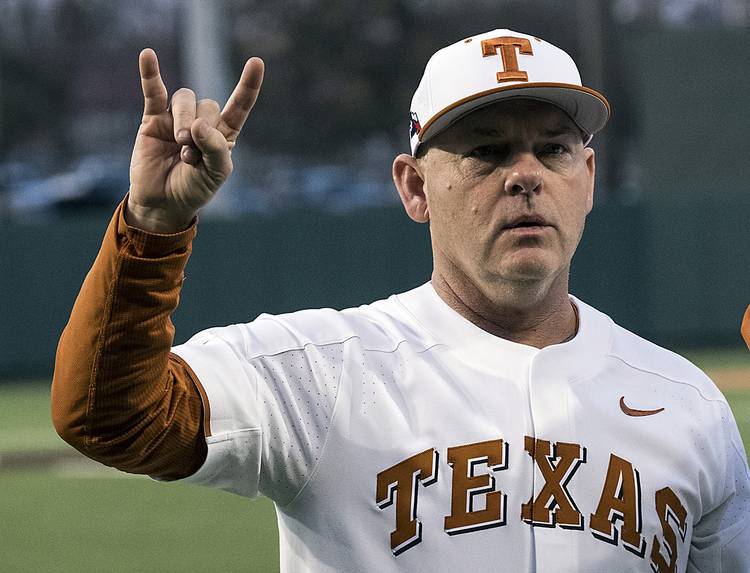 Texas head coach, David Pierce during the pre-game playing of the Eyes of Texas prior to an NCAA college baseball game with Stanford held at UFCU Disch-Falk Field, Thursday, March 8, 2018, in Austin, Texas. (AUSTIN AMERICAN-STATESMAN For Rodolfo Gonzalez)

Shh!
Don’t yell. You wouldn’t want to wake up those Texas bats.
That’s how it felt at Disch-Falk Field Friday night as the previously hot Texas offense went silent against Stanford.
One night after putting up 12 hits in the series opener, the Longhorns ran headlong into Kris Bubic whose left arm doubled as a silencer. Bubic held the Horns to three hits and single run through six innings and his teammates jumped on Texas starter Nolan Kingham in a 7-1 win.
Bubic, a junior lefty, one-hit the Longhorns over the first four innings and that hit came on leadoff man David Hamilton’s bunt in the third inning. It actually loaded the bases with no outs after Bubic issued a pair of walks. The would-be rally dissolved into nothing after Hamilton was called out for runner’s interference on Kody Clemens’ one-out chopper followed by a forceout.
Bubic (3-0) walked five but gave up only three hits with nine strikeouts on 103 pitches. He was able to get his 90-mph-plus fastball over the plate and kept the Horns off balance with some deceptive off-speed stuff.
Texas (9-5) scored 46 runs in its last four games but but couldn’t touch Bubic which comes as little surprise since he entered the game with a 16-inning scoreless streak, which stretched to 22 before he was credited with an earned run in the seventh after Duke Ellis’ groundout off reliever Jacob Palisch scored pinch runner Kamron Fields with Texas’ lone run.
“He commanded the zone on both sides of the plate,” said Texas DH Zach Zubia. “His (velocity) was up there. I think he topping out at 93 and 94. He was spot on. He was money.”
The Cardinal (12-2) returned to their stingy ways after giving up a season-high six runs in the opener. Before the 8-6 loss, Stanford had surrendered only nine runs in its previous five games. Three Stanford pitchers handcuffed Texas the entire evening and became the first group to hold second baseman Kody Clemens hitless. Clemens, who hit his fourth homer of the year in the opener, went 0-for-3 and had his hitting streak snapped at 13 games.
“Bubic was as good as advertised,” said Texas coach David Pierce. “We knew we would get minimum opportunities.”
While Bubic continued his solid start to the season, Texas starter Nolan Kingham (2-2) never appeared comfortable on the mound. Worse yet, on the times he got ahead of Stanford’s hitters, he struggled to close out at-bats. Nico Hoerner’s solo homer in the first inning was only the beginning of his problems. Right fielder Brandon Wulff connected on a three-run blast for a 5-0 lead in the fifth. The two hitters atop Stanford’s batting order — Tim Tawa and Hoerner — combined to go 5-for-9 with a pair of RBIs and four runs scored.
Kingham gave up five earned runs on 10 hits with three strikeouts and a walk.
“He left the ball up,” Pierce said. “His best two pitches, he’s got to get the ball down…It’s a good test for him. He hasn’t been as sharp as opening night and we’ve got to get him right.”
Stanford added a pair in the eighth on a bases-loaded walk and a sacrifice fly.
It’s not just a good test for Kingham but for his teammates. For many years, former Texas coach Augie Garrido used the Stanford series as a measuring stick as to what his team needed to work on before Big 12 play. This Cardinal group is solid in all areas and if you told Pierce before the series that his team would split the first two games against the seventh-ranked team in the country, he would have taken it, no questions asked.
“Honestly, (this series) builds character,” he said. “We know we would have to perform against a quality team every single game this weekend. They outplayed us tonight. We’ve got an opportunity to go back at it tomorrow.”
Game three is set for 2:30 p.m. Saturday.

Bohls: Texas may or may not pass eyeball test after this black eye