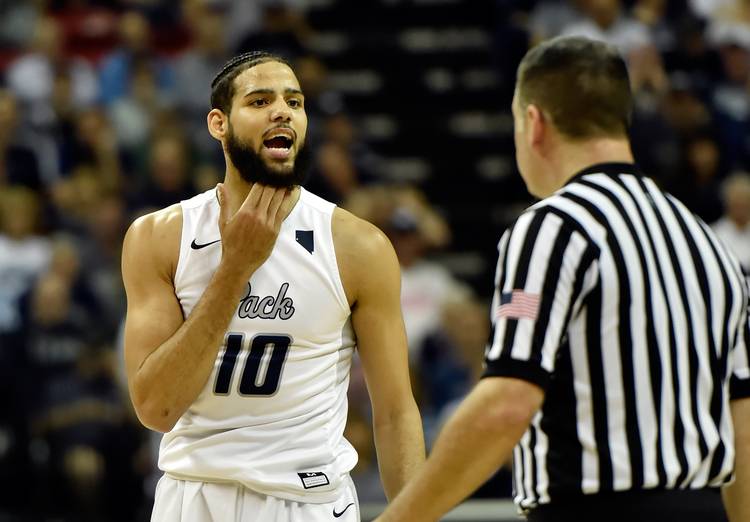 LAS VEGAS, NV - MARCH 09: Caleb Martin #10 of the Nevada Wolf Pack speaks with a referee during a semifinal game of the Mountain West Conference basketball tournament against the San Diego State Aztecs at the Thomas & Mack Center on March 9, 2018 in Las Vegas, Nevada. (Photo by David Becker/Getty Images)

NASHVILLE, Tenn. — Texas must avoid a twin killing in the first round.

The offensively challenged Horns have Nevada brothers Caleb and Cody Martin circled on their priority list. Identical in look, age and size (6 feet, 7 inches, 205 pounds), the rangy twins are two cogs for a scoring machine that enters this NCAA first-round matchup with plenty of confidence, despite a couple of stubbed toes during the final stretch of the regular season.

The Martins may look the same, but their roles are different.

Caleb, with all due respect to the hard-charging Jordan Caroline, is this team’s alpha dog. The reigning Mountain West player of the year, he averaged 19.5 points. 5.3 rebounds and 2.5 assists, spurring a nice turnaround in his first season after the Wolf Pack finished 9-22 a year ago.

Brother Cody earned defensive player of the year honors in the conference, but he also did good work on the other end of the court. According to the Reno Gazette-Journal, Cody became the first college basketball player in the last 25 seasons to average at least 14 points, six rebounds, four assists, 1.5 blocks, and 1.5 steals while shooting 50 percent from the field.

The Martins embody what Nevada is all about: a bunch of wings who can score like gangbusters while battling against a size disadvantage night in and night out.

“The challenges that they present, they’re extremely versatile,” Smart said of the twins. “They play every position for them because of the way they play. But both of them, their natural position is kind of a small forward, big wing. That’s one one spot we don’t have.”

Shaka attempted to put the clamps on them after they announced their plans to transfer from North Carolina State, but he had only one scholarship at his disposal, a fact that effectively killed any chance of wrapping up what was obviously a package deal.

You can’t fault Smart for trying. It was actually his second run at the twins. While at Virginia Commonwealth, he got in the mix for the Martins, but they chose the other Wolf Pack.

Remember the Havoc defense that made Shaka such a hot commodity at VCU? Well, these twins are the prototypical players for his old pressure defense. As it turns out, they are a point guard-power forward combo platter that’s responsible for 32.7 points, 11.6 rebounds, and 7.2 assists per game. Overall, Nevada’s a bunch of 6-7 guys, similar in size to those whom Smart coached at Virginia Commonwealth but not as aggressive defensively. On Friday, Texas will pound it inside to Mo Bamba, Jericho Sims and Dylan Osetkowski if it’s smart.

“Hands down, it’s probably the biggest backcourt we’ve faced,” said Texas guard Jase Febres. “The whole team, though, is around 6-7 which isn’t a problem. I know we have smaller guards, but we’re physical and we will battle up.”

The Horns must battle and close out because the three-pointers will be flying toward the rim from the jump. And don’t think that a few bricks will keep this team from jacking it up. Shooting from behind the arc is a way of life for these guys.

“At the end of the day, we live by the three a lot of times,” Caleb said. “When they don’t fall, we have to rely on our defense and our rebounding for sure.”

It’s not as simple as it sounds, but it will be on Texas to make sure there’s not a happy family reunion in the other locker room. If the Martin twins go off, the Horns might not make it to Sunday because Nevada has other weapons, too. The biggest area of concern will be the Wolfpack’s three-point shooting percentage. Nevada shares the wealth from behind the arc, but Caleb and teammate Kendall Stephens have combined to knock down 207 three-pointers, just 27 fewer than Texas has made as a team.

Smart knows what his team’s up against, but knowing the game plan and executing it successfully are two different things. This is the time of the year when the urgency is amped up, and in Texas’ case, it will have to be amped up double-time.