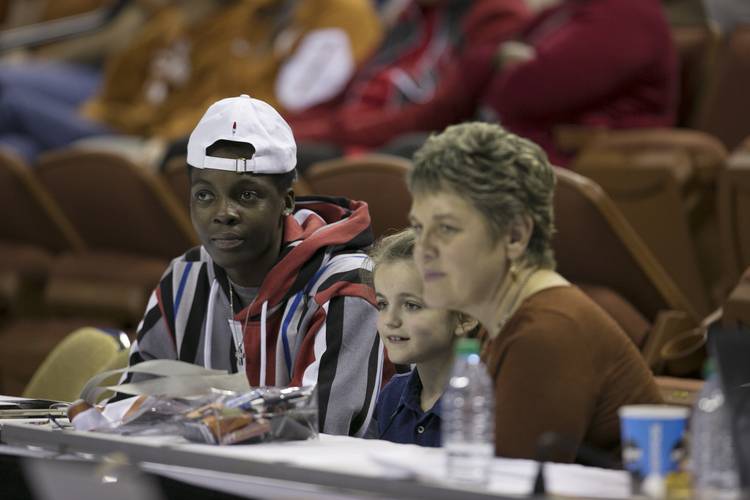 Texas men's basketball player Andrew Jones sits on the sidelines during the UT women's game against Maine in the first round of the NCAA Tournament on Saturday. Jones talked to the team at halftime. DEBORAH CANNON/FOR AMERICAN STATESMAN

No one expected Maine to UMBC the Texas Longhorns on Saturday.

The 83-54 final played out with little drama at the Erwin Center. The Horns opened the NCAA Tournament in impressive fashion and received an additional dose of inspiration at courtside.

UT men’s basketball player Andrew Jones made his first appearance at the Erwin Center since being diagnosed with leukemia in January. Jones sat with women’s athletics director Chris Plonsky during the first half and then greeted the team in the locker room at the half.

“I just told them to keep working hard and good things can happen,” said the sophomore guard. “It was great to come back and watch them play. I have a lot of good friends on the team, and I wanted to be here to support them.”

As expected, the Horns were never tested. Coach Karen Aston played everybody and had freshman Chasity Patterson in there early for senior Brooke McCarty, who had an easy night at the office. McCarty, one of the best 3-point shooters in program history, took only three shots while cohort Ariel Atkins filled up the stat sheets with four straight makes in the first quarter en route to 16 points, four rebounds and four assists.

Unlike the men’s team, which took that unforeseen blow of losing the best returning player on the team to a horrible disease, the women are healthy and ready to make a deep tourney run, that is, if they can get past Arizona State, which rolled past Nebraska in the opener.

Aston never takes any opponent for granted, and knowing her the way I do, she was as jittery in pregame against Maine as she would be against those other Bears who play up Interstate 35 a piece.

Texas played up to its No. 2 seeding and impressed a nice crowd at the Erwin Center with crisp passing and some red-hot 3-point shooting. The Horns knocked down 6 of 8 triples and held Maine to 3 of 19 from behind the arc. While her team was an overwhelming favorite, credit Aston for making sure they were ready pounce after nearly two weeks off. The dedication to lockdown defense was evident from the beginning against the guard-heavy Black Bears, who fired away from the outside with little success.

On this day, there were no worries. Her team was ready to roll, and roll they did. What warmed the heart was Aston realizing she could use Jones’ story as a teaching moment for her players. What befell a 20-year-old elite athlete could happen to anybody. Jones is an inspiration to us all because he is fighting a daily battle with a great spirit and the kind of positive attitude that will have him back on the court doing what he loves. His words needed to be heard in the locker room not because it was going to help a team win a basketball game but because he represents the power of the human spirit.

Jones met with his teammates at the team practice facility before the women’s game. The season is over for the Texas men, but his presence in the locker room gave everyone a reason to smile.

“We were all disappointed on what happened against Nevada, but it wasn’t really as much about the game as much as it was about ‘How you doing?’ — you know? We were just glad to be together again,” he said.

“He brings good times,” Atkins said. “Getting to see him and getting to talk to him and being around him. We were all in there joking and laughing. It was really good to see him.”

Aston asked men’s coach Shaka Smart if she could speak with Jones.

He told her he was coming to the game, and she asked him to speak to the team.

“For him to come in — and a lot of these girls are good friends with Andrew and care deeply about him — it was a good time for them to share some moments,” she said. “It was good for the girls, and it was good to have him back around. He looks great.”

Jones will be in Austin for the next two weeks before returning to Houston for more outpatient treatment at MD Anderson. When I asked him if he couldn’t wait to get back to Austin to hit his favorite restaurants, Jones smiled and said, “I went to Chick-fil-A today.”

“Hey, I can’t help but think about a backcourt with you, Matt Coleman and Snoop Roach next year,” I told him. Jones’ eyes brightened, and he broke into a wide grin.

“That’s definitely the goal,” he said. “I’m working hard every day to make it back. It’s all I think about every day.”

The Andrew Jones and Family Support Fund, which was set up to help Jones and his family defray the costs of his treatment had raised more than $197,000 as of Saturday. To donate, go to https://hornraiser.utexas.edu/project/9014.

Bohls: Dylan Frittelli’s travels now bring him back to Austin for the Dell Match Play