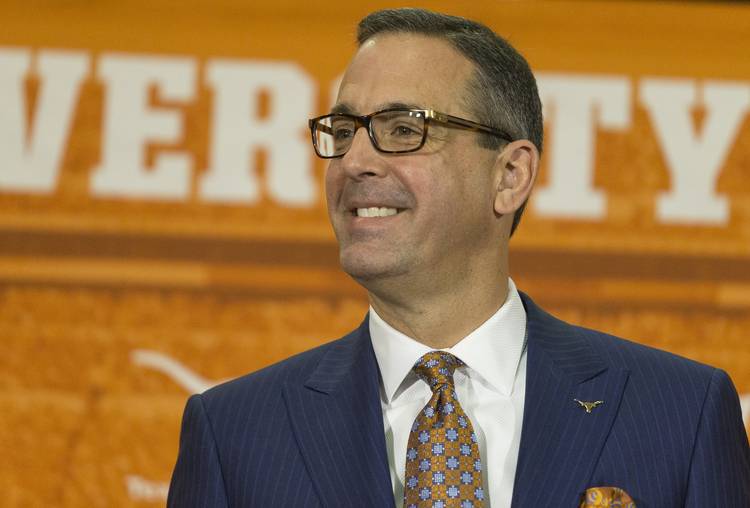 Texas athletic director Chris Del Conte, shown in his introductory news conference in November 2017, played a major role in this spring's "This is Texas" tour across the state. (Photo by Stephen Spillman/For the American-Statesman)

Chris Del Conte has barely wrinkled his bed sheets, no surprise given the little time he spends lying on them.

He typically doesn’t settle into his bed at the AT&T Hotel & Conference Center until midnight or 1 a.m., but he still beats the roosters up, rising at 5 in the morning. Del Conte will then get in a workout on a stationary cycle in the exercise room, and he’ll down a breakfast of blueberries or raspberries with a little oatmeal on the side, going “easy on the swine.”

And then it’s all business.

From 7 to 7, Del Conte, Texas’ new athletic director, is an energetic workaholic who’s constantly pressing the flesh with fans and boosters, hitting up well-heeled donors for gifts, meeting with staff members and attending basketball games, tennis matches, swimming meets or whatever’s next up on the Longhorns’ sports schedule.

Then the next day he starts all over again.

“He’s tireless,” said Longhorns football spokesman John Bianco. “The energy and passion that he has and uses to manage a pretty daunting job is unbelievable.”

The first 100 days on the job for the Longhorns’ new boss have come and gone, and Del Conte, who’s by way of TCU, has tried to pack 200 days of work into that span. This self-described “simple guy from Taos, New Mexico” was a dynamic hire who’s been universally celebrated and has hit the ground running. When asked who was Texas President Gregory Fenves’ second choice if Del Conte had said no, one official with knowledge about the search said, “There was none.”

Fenves, who sealed the deal with Del Conte over drinks in New York City, said Monday, “I knew he was the right person to lead Texas athletics. I had high expectations, and Chris Del Conte has exceeded them.”

The tributes pour in from everywhere.

“He’ll do a terrific job there,” said Florida AD Scott Stricklin, part of a half dozen ADs who regularly meet with Del Conte and others to bounce ideas off one another.

Prominent Longhorn Don Evans, a former U.S. Secretary of Commerce under President George W. Bush, praised the hiring and said he thinks Del Conte is off to a strong start. “He’s been great.”

Del Conte hasn’t made any missteps, but he isn’t prone to over-deliberation. Last month, he fired track and field coach Mario Sategna in a desire for “a change in leadership,” but otherwise he hasn’t made many changes. Those are yet to come, later this spring or early this summer, which has many on pins and needles.

“I’m up to speed enough,” Del Conte said. “My goal coming in was to learn the culture. I wanted to see through the eyes of the people who work here and get a better understanding of what this place means inside out and outside in.”

And what has he learned?

“I understand more the gravitas of the job and what it means to be working for the University of Texas,” he said recently in Nashville during the abbreviated NCAA Tournament stay of the men’s basketball team. “But there’s always a curve ball coming.”

Not to mention, some brushback pitches.

Del Conte knows people are watching, and he’s fine with that. He embraces the scrutiny. And he said any restructuring of the department “won’t take too long. Before September? Oh yeah, for sure, but I don’t think we’re heavy (in personnel).”

Expectations are high. And should be at a place that’s grown uncomfortable about its jaw-dropping mediocrity during the past decade. Fortunately, he’s the exact right person to fix what’s broken in UT athletics.

One athletic administrator in the state called the addition of Del Conte “the greatest hire by Texas in the last 20 years.”

“I agree with that,” said Steve Hicks, the athletic liaison on the University of Texas board of regents. “Can he fix Texas? I’m counting on it.”

Former Big 12 commissioner Chuck Neinas recalled that “Chris talked probably 50 percent of the time at league meetings when he was the TCU AD. I’m assuming he’ll talk all the time now.”

He is a talker.

Already Del Conte has met with more than half of the 429 staffers in the athletic department, whether it was for 20 minutes in his office or a half hour somewhere in Royal-Memorial Stadium. He did the same when he took the TCU job more than eight years ago, but there were only 150 employees he had to meet there. At UT, he’s met with deans and faculty members, donors and custodians and many of the 500-plus Longhorns athletes.

How busy has Del Conte been over the past three months? Well, consider that:

All in all, Del Conte wants to listen as much as he wants to be heard. His managerial style reminds me of Drayton McLane’s, including a mix-with-the-customer persona. No detail is too small, no voice is unimportant.

“I think it’s important to meet with everybody,” he said. “Texas over the last 10 years has had a lot of turmoil. I think it’s gone from good to bad to indifferent. The school lost three iconic coaches in Mack Brown, Rick Barnes and Augie Garrido as well as presidents and athletic directors. Anytime you lose 100 years of leadership, the employees are going to be pensive. I take a lot of input. I want them to see how I operate.”

What he’ll do is provide one voice for what has largely been a fractured athletic department since DeLoss Dodds retired in 2011 after 31 years. That’s important for a program that has endured abysmal results in its major sports, and suffered as a result of finger-pointing, back-biting and territorial standoffs between the formerly separate men and women’s athletic departments . (To her credit, Chris Plonsky has fought tirelessly for the women’s teams at UT.)

“I haven’t sensed friction that way,” Del Conte said. “It’s not the men versus the women. They don’t have to be mano a mano. It’s not tit for tat.”

He’s all about accountability, and he wants to empower decision-makers so he doesn’t have to waste time on every detail. Perhaps the role of Plonsky, the former women’s AD, will change, but Del Conte said, “Changing the culture, not titles, is what’s important to me. Let’s provide the coaches with what they need, then hold them accountable.”

That’s been missing of late. Of the school’s 14 national titles since the turn of the century, seven have come from Eddie Reese’s male swimmers. Although men’s swimming, men’s golf and women’s track have produced 11 national titles since 2000, football and baseball haven’t produced one since 2005 and men’s basketball has one modern-day Final Four appearance that came in 2003.

This school year, Texas has been able to celebrate only a 7-6 football record that included a victory in a lower-tier bowl; a first-round loss in the NCAA men’s basketball tournament; two postseason victories so far by the women’s hoops team; and a 12-9 record in baseball entering Tuesday. Modest results, at best. There’s work to be done.

For their part, the Longhorns coaches back Del Conte.

“Chris brings an amazing amount of energy for all of us,” said football coach Tom Herman. “He’s brilliant, driven, passionate and determined to get Texas back to the top. Chris will challenge everyone and hold them accountable, but do it in a positive way. The thing I love so much about him is he really cares about positioning our programs to be successful, supporting us and putting student-athletes first. He’s done an amazing job already, and I’m really excited about the future under his leadership.”

But just as the pioneering Donna Lopiano did before him at Texas, he expects big success and he should. He wants every sport to be part of top-10 conversations nationally while also competing regularly for championships. And most figure Del Conte is the man to make it happen.

“He’s a combination of people,” said a businessman who works with the Big 12. “He’s the same as DeLoss in his message. He’s up front. He can sell anything. He’s outgoing. He works his ass off. He empowers his employees. That’s a $200 million a year company. I think Texas is really lucky to have him.”

Like Dodds Del Conte was a track and field athlete in college. While Dodds favored the 440-yard dash at Kansas State, Del Conte was a high jumper at UC-Santa Barbara. “And he’s still jumping high,” Bowlsby said.

Del Conte will raise the bar at Texas — and fairly quickly. Although his wife and two daughters will soon leave Fort Worth for a house in West Austin, Del Conte will continue to pour himself into the job.

“He’s building a wealth of information in an effort to establish a longterm plan to improve the efficiency and effectiveness of the entire athletic department,” Bianco said. “As a staff member, he inspires you to get better, find new ways of doing things, grow professionally.

Del Conte is aware of all the layers of bureaucracy at Texas and knows he has to wear a political hard hat at times. Some might say instituting changes at UT can be painfully slow, but Del Conte said he doesn’t sense desperation inside Belmont Hall. He talks of “reprogramming” and “re-flipping the script” as he looks ahead.

“I don’t look backward,” he said. “I didn’t come in to break everything. Let’s move on (from the past).”

Bohls: Texas’ Doug Ghim is a man with game and a Masters plan