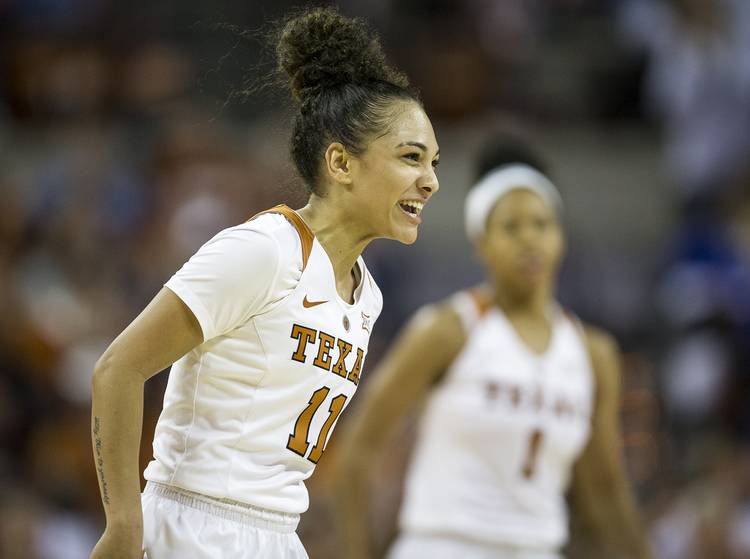 They didn’t want it to end, this sentimental journey of the last four years for the two, attached-at-the-hip, never-loose-with-the-lip Texas teammates.

And so they didn’t let it.

Texas senior guards Brooke McCarty and Ariel Atkins, driven by their final home games of their career in an emotion-tinged setting, turned in electric performances Monday night to cruise past seventh-seeded Arizona State 85-65 and advance to their fourth straight Sweet 16.

“I think this is what Texas should be every single year,” McCarty said. “But we can’t take it for granted.”

With the game well in hand, the pair was taken out of the game simultaneously to allow the crowd of 3,286 properly salute them with a rowdy ovation one last time.

“I just looked at Brooke, and I was like, wow,” Atkins said. “It was like we’re actually done here.”

Almost. While it was a fun but somber night, neither has any plans to stop there. Both have a sense of urgency to bring the Longhorns a second national championship and first in more than three decades. McCarty and Atkins fueled a second-half charge to race past the Sun Devils in their second-round NCAA Tournament game at the Erwin Center.

The diminutive McCarty, in particular, took matters into her own hands with a 12-point third quarter to provide some separation from the Sun Devils. In fact, she looked like she was just showing off. The two seniors and junior Lashann Higgs combined for 46 points, 19 rebounds, 11 assists and a whole lot of anguish for Arizona State.

“I started smiling halfway through (the third quarter) because I just realized this kid was going off,” Atkins said of McCarty.

But it’s been Higgs’ fast starts against both Maine on Saturday and ASU on Monday that helped spark Texas until McCarty and Atkins got into their normal grooves. The fearless Higgs connected on 15 of her 19 shots for 34 points in the two games and served notice this will be her team next season when these two old-timers move on.

“I thought we came out a little frazzled,” Texas coach Karen Aston said, “but Brooke made some good decisions, and we’re much better with Lashann when she’s free-flowing.”

With nine upsets in this first weekend of post-season play, including two by 11th seeds Buffalo and Central Michigan and one apiece by an 11 in Creighton and a 12 in Florida Gulf Coast University, Aston appreciated her team’s maturity and said the Horns wanted to make sure their season wouldn’t end on Monday night. Not that she needed to give a big pep talk.

“I think the team was more interested in the post-game meal than reaching the Sweet 16,” Aston cracked.

Of course, this is a program hungry to re-establish itself as one of the game’s premier teams. It’s a club built on athletic, ultra-quick guards who are adept at dribble penetration and dishing off to the Longhorn post players inside for easy layups, and as deep as Aston’s bench is — she put 11 players on the floor Monday night — this team will go as far as those three guards and sophomore Sug Sutton will take them.

In the immediate future, they’ll take them to Kansas City where Texas will match up with somewhat of a mirror image in third-seeded UCLA. Aston loves the fact that her team plays like it has has some unfinished business in the form of an extended run, but she’s seen enough of the Bruins during some of her late-night sleepless evenings to know they present quite a challenge.

Vanquished ASU coach Charli Turner Thorne knows that her Sun Devils fell by eight points in a road game against the Bruins in their only meeting and predicted an up-tempo game in the Sweet 16.

“They’re both great transition teams,” she said. “I think it’s going to be a fantastic game. I think Texas probably has a little more depth. Their whole plan against us was to rip and go. I think both have really good seniors. There are three top 10 teams (in their Pac-12), and Texas is as good as any of them. But it’s going to be a track meet.”

Texas won’t object to that because it plays its best basketball in the open court. Its guards fuel the transition game and also provide the key to the half-court offense because the Longhorns post players have difficulty getting their own shots without the dribble penetration from the likes of McCarty, Akins and crew.

“They’ve got guards who can match up with our guards,” Aston said of UCLA, “and we have a very similar style of play. But they have a couple of jumping beans with high motors.”

Aston raves about UCLA’s all-star guard Jordin Canada as well as 6-4 Monique Billings, who averages 15 points and almost 10 rebounds a game but has gone off for as many as 20 rebounds in a game. “She’s like (Dennis) Rodman. She doesn’t stop.”

And if Texas can get by the Bruins, it’s more than likely going to face UConn-killer Mississippi State, which features probable All-American Victoria Vivans and 6-7 Brenham product Teaira McCowan, a formidable obstacle indeed.

But the Longhorns present some problems as well.

“They don’t want the season to be over,” Aston said. “They just don’t.”

Bohls: Dylan Frittelli’s travels now bring him back to Austin for the Dell Match Play