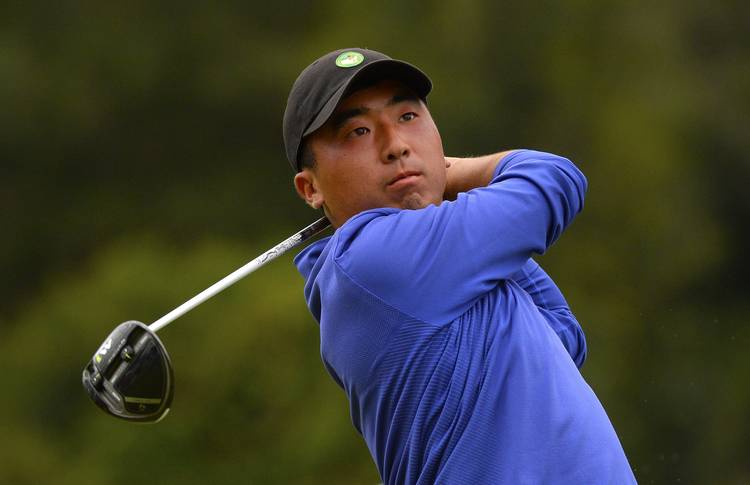 Doug Ghim makes a tee shot on the second hole during his semi-final match against Theo Humphrey at the U.S. Amateur Championship on August 19, 2017 at the The Riviera Country Club in Pacific Palisades, California. (Photo by Robert Laberge/Getty Images)

AUGUSTA, Ga. — The room will be more than a little cramped, but he’s fine with it for one night.

Somehow the good folks at Augusta National crammed five single beds into the very small upstairs room of the clubhouse known as the Crow’s Nest. He reserved a spot early enough so he wouldn’t have to sleep on the floor Monday night.

He’ll look through the skylight at the stars above and dream of what might come.

The beds are spaced about four inches apart, and anyone with an early tee time the next morning will literally have to step over another sleeping roommate to get to the shower. But the accommodations might as well be a five-star luxury hotel on the Riviera because of the status the residents can claim.

Doug Ghim is playing in his very first Masters.

The accomplished senior for the Texas golf team qualified for an invitation when he finished as the runner-up to Clemson’s Doc Redman in last summer’s U.S. Amateur, after leading by two with two holes to play, and he’ll gladly bunk with four other amateurs in the tiny, upstairs bedroom that overlooks the majestic oak tree that guards the first tee.

He’s toured the place before and has checked out all the pictures of greats like Tiger Woods when he was 19 and Phil Mickelson, Ken Venturi and “Mr. Nicklaus,” as he calls six-time winner Jack Nicklaus, who have spent the night there.

He’s played the course before, too, touring the sacred grounds first as a UT golfer who checked out a practice round. By his count, he’s played about 11 rounds in the last year with official visits to Augusta National as a qualifying player in his Masters prep or as a guest of prominent, former Longhorns regents Bob Rowling and Tom Hicks.

His best round here? He scored a 69 on his first time and has had a pair of birdies on that uphill 18th closing hole before. He’s posted a 32 on the back nine before and an even better 31 on the front.

Ghim comes into the week with modest expectations but grand experiences. He’ll take a ton of pictures, he says, because “that’s what we millennials do,” and he’ll work with Golf Week on his version of a daily journal.

Well, maybe not that modest of goals, to be honest.

“It never ceases to amaze me the stuff that’s done on that golf course. I don’t see why it can’t happen for me,” he said. “Augusta National is a beast that challenges you physically and mentally. I have the ultimate respect for everybody. I’m not going to say I’m gonna win or any of that kind of sentiment, but I know I can play well.”

Ghim fit in a practice round with former Masters champion Jordan Spieth — they join Jhonnatan Vegas and Dylan Frittelli to put four Longhorns in the field of 87— and he hoped to walk nine holes with two-time winner Ben Crenshaw.

“I want to surround myself with good company,” Ghim said.

That will include his highly supportive parents because this will also be a definite family affair for the 21-year-old golfer who was taught to play the game by his father, Jeff, a Korean-born architect and former military man who specialized in explosives. Doug was home-schooled and learned the game from his dad in such a disciplined approach that he wasn’t allowed to play on a course until he was well-versed enough. He’s been known to play up to 36 holes a day at the 9-hole Twin Lakes course just a three-wood from their home in Arlington Heights, Ill.

“Doug’s had a remarkable career,” Longhorns coach John Fields said Monday. “He’s been an All-American and has become one of the best players in college golf. Doug weathered the storm at the U.S. Amateur of what was the best putting exhibition I’ve ever, ever seen in golf from Doc Redman. That pointed out the resilience of Doug.”

Jeff will caddie for his son on Thursday, and mom Susan will take time off from her job as a United Airlines flight attendant to carry Doug’s bag for the Par-3 tournament on Wednesday.

Beforehand, Doug will continue his methodical approach. He got his self-discipline from his dad, who Doug jokes is so focused “he probably packed for the Masters a month ago.”

Ghim loves the Augusta layout and in particular likes the par-5 downhill 10th hole, which he says he has birdied about a half-dozen times.

Ghim’s game isn’t such that he can overpower a course. He relies more on precision and tremendous ball-striking. And in many respects, his overall game reminds somewhat of Spieth’s.

“I don’t try to blow you away, hitting my drives 350 yards, but I try to hit as many fairways as I can,” Ghim said. “I pride myself on my ball-striking. I’d like to think I have a decent short game. I don’t feel like I do anything that makes anybody’s jaw drop, but I have a relatively solid game and I’m learning how to think better and acquire new shots I don’t have.”

Those shots will come. But he’s patient. To a point.

“No one is expecting me to shoot a 64 even though I know I’m capable of it,” he said. “No one’s giving me a shot outside of Longhorn Nation. I’m gonna be nervous, but I’ll just embrace it.”

And dream of what may come while sleeping in the Crow’s Nest. He figures to at least leave there with some souvenirs. Like some pads from the bridge table up there as well as a few Augusta National scorecards and pencils.

Bohls: With Jordan Spieth’s touch, confidence restored, is this year’s slow start behind him?