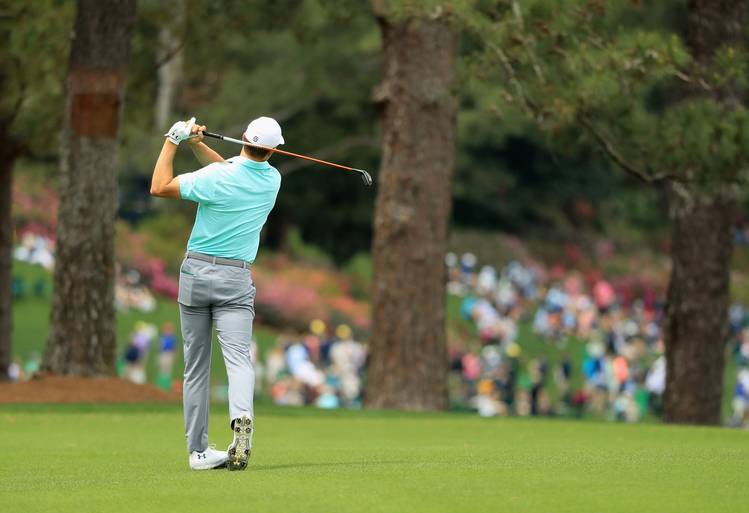 AUGUSTA, GA - APRIL 04: Jordan Spieth of the United States plays a shot on the 15th hole during a practice round prior to the start of the 2018 Masters Tournament at Augusta National Golf Club on April 4, 2018 in Augusta, Georgia. (Photo by Andrew Redington/Getty Images)

AUGUSTA, Ga. — Jordan Spieth went to a place this week where very few professional athletes allow themselves to go, especially in a public setting, when the young superstar looked deep into his psyche and had a confession.

He’d been in a panic.

Really? The same guy who won the Masters in his second start here and the guy who is already just a PGA Championship short of the career Grand Slam? That guy?

Exactly. That refreshing candor is just part of the reason golf fans are drawn to this gifted athlete. Another is his solid game in all parts as well as his accommodating manner with galleries and reporters, but for a blip, he has struggled of late. That’s saying something because he could retire today at age 24 with 11 PGA wins and three major championships and already qualify as a Hall of Famer.

He won’t stop, of course, and said he figures to play the Masters at least 20 more years, and he’s intent on a return to form that made him one of the rising stars in golf. It can’t come back soon enough, and he hopes his impressive, third-place tie in last week’s Houston Open is a sign of things to come.

Before that, however, his game was a little lost. Normally the owner of one of the very best short games in the sport, Spieth was struggling with his reads of greens, his speed on his putts, his control. His putting had gone awry.

Yes, the former Texas national champion was in a true slump. The first slump, mind you, of a very short, highly decorated career that has included three majors before he’d turned 24.

Spieth has barely sniffed a trophy this season and, before Sunday, had nuzzled into the top ten just twice with ninth-place finishes at Kapalua and Riviera. Then, under the scrutiny of his second hometown fans at Austin Country Club, he regressed, played horribly in his third-round WGC-Dell Match Play matchup with Patrick Reed and failed to emerge from pool play into the round of 16.

So did he have some panic?

It takes a lot of inner fortitude and resilience for a pro athlete to concede that he’d lost a bit of his competitive edge. When was the last time you’ve heard Tom Brady suggest he was in decline? Ever glimpse self-doubt from LeBron James?

But Spieth’s underlying mental strength and confidence prop him up against failure. And there were mitigating factors, none bigger than his sickly bout with mononucleosis that shed pounds off his already trim if not too thin frame.

“I spent most of December in bed, very sick,” Spieth said. “I was only home for 10 days the first two months of the year, trying to play through it. So I was getting frustrated.”

That was compounded by a rare lack of results on the Tour he’s dominated at times with a previous No. 1 world ranking and a victory in the British Open last July with a stunning, birdie-eagle-birdie-birdie run after a bogey on 13. That, combined with a Masters title in 2015 when he was once 19-under par and capped it off tying Tiger Woods’ 72-hole record score of 270, leaves him with a high bar to reach.

But last week has galvanized him and given him a ton of confidence, coming back to a place where he’s known nothing but success. He’s won the Masters once, finished second twice and has every reason to believe he could have three green jackets already.

While the pick to win here is Justin Thomas, the silky smooth, No. 2-ranked golfer in the world, with last year’s runner-up Justin Rose as my Plan B choice — and don’t sleep on Dell Match Play champion Bubba Watson — there’s no real reason to think Spieth can’t win.

”I’m trying to gain some ground on him,” said Thomas, whose Alabama team fell to Spieth’s Longhorns for the NCAA crown in 2012. “I still got a long way to go, but I’m getting there. All of us love this tournament, but he really, really loves this tournament.”

Spieth almost holed the first hole of the Par-3 Tournament Wednesday afternoon, his golf ball resting an inch from the lip of the cup. But very few are picking Spieth to win as Tiger Woods, Watson and Rose are popular choices.

“I feel better coming into this week than I did in 2016 and 2014 where I came off of missed cuts in Houston,” Spieth said. “There’s a lot to be said of the previous week’s momentum. And being able to work my way last week into contention and hit some putts under pressure, I kind of pretended like I was tied for the lead even though I figured I was a stroke or two behind. I kind of wanted that ‘you need to make this’ feeling.”

Others feel strongly about Spieth’s ability to win.

Spieth’s not taking a thing for granted. But even though he accomplished his lifelong goal of winning the Masters at the tender age of 21, he’s eager to win more because he says it’d be “kind of cool to have multiple green jackets.” Who knows, if he can pull it off, he might make off with one permanently.

“I think if you have a second and you somehow walk away with one, it’s not as noticeable if you accidentally take it,” he said. “I think some of the older guys maybe … sorry, I don’t think I can say that.”

But he can think it because it’s doable.

Bohls: Texas’ Doug Ghim is a man with game and a Masters plan