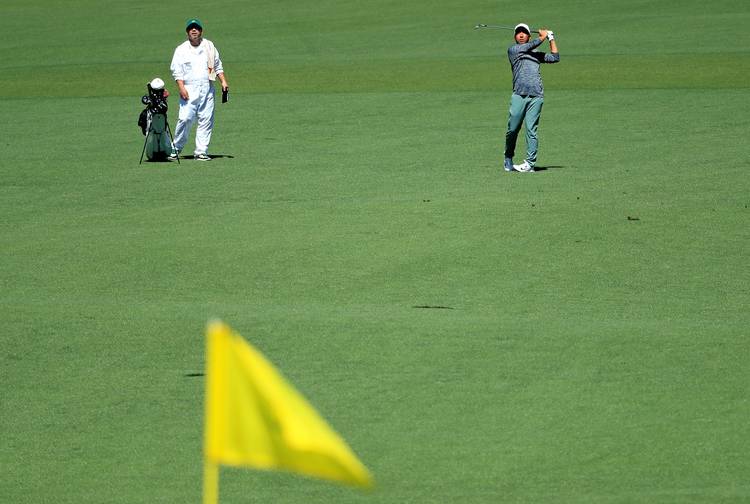 Amateur Doug Ghim of the United States plays a shot on the second hole during the first round of the 2018 Masters Tournament at Augusta National Golf Club on April 5, 2018 in Augusta, Georgia. (Photo by Andrew Redington/Getty Images)

AUGUSTA, Ga. — Doug Ghim was putting the finishing touches on his preparation when another somewhat better-known Texas Longhorn approached him on the putting green.

Jordan Spieth, who knows a thing or two about success at Augusta National, gave Texas’ senior golfer a bit of a pep talk to ease his mind when Ghim told him his nerves were getting the better of him.

“It’s scoreable,” the 2015 Masters champion told Ghim late Thursday morning. “There’s no wind. Just remember that it’s just a golf course at the end of the day. Go tear it up.”

And so Ghim did.

He did stripe his tee shot down the middle of the first fairway with what his college coach called “a spectacular shot” even though he was so unnerved he couldn’t feel his hands. But Ghim, who turns 22 next week, clearly took Spieth’s words to heart, warmed to the task and, while he didn’t bring this course to its knees, did get in his licks and finished at even-par 72, just six strokes off the lead behind — who else? — front-running Spieth in this pseudo-Longhorn Invitational.

SIXTH EAGLE AT THE 18TH HOLE IN #THEMASTERS HISTORY!

What a way to walk off for your debut at Augusta. pic.twitter.com/VpT6g2ZjxX

Spieth turned in a vintage Spieth day with five consecutive back-nine birdies for a 6-under 66 and a two-stroke lead over Matt Kuchar and the ever-flexible Tony Finau. But Ghim, too, made his mark.

Before he would finish in the late afternoon sun, Ghim would eagle not one, but two holes on the back nine, a 7-foot putt after a sensational hybrid shot from 220 yards and the jaw-dropping, 6-iron shot from 185 yards that hopped into the cup on No. 18.

He couldn’t see the elevated green from where he stood, but heard the gallery clapping and finally exhaling a full-throated roar after rising to their feet. His father, Jeff, who worked as his caddie, rushed head-long toward his son and bear-hugged him.

His mother heard the noise, too.

“I kept hearing the roars,” said Susan Ghim, a flight attendant for United Airlines who sank her son’s final putt during the Par 3 tournament for fun. “I was thinking maybe it’s Spieth. Or maybe it’s Tiger Woods. Then, I thought ‘Is this for my son?’”

It was, indeed. Not that anyone who knows the under-rated golfer from Arlington Heights, Ill., should be surprised. This is a self-assured young man with tremendous talent, taught by his Korean-born father. Longhorns coach John Fields was well aware of Ghim’s talents and recruited him in somewhat bizarre fashion, giving him a 48-hour window in which to make up his mind.

Well-versed in UT lore and a program that’s produced studs from Crenshaw and Kite to Spieth and Hossler, and tired of long winter months in the upper Midwest, Ghim chose Texas. An outstanding ball-striker, he’s very accustomed to big-time pressure although he has had his share of disappointments like excruciating losses in the U.S. Public Links and more recently in last summer’s U.S. Amateur when he fell to Clemson’s Doc Redman after leading with two holes to go. Even so, that runner-up status earned him this Masters berth.

His dad couldn’t quit smiling after Thursday’s round. His mother was aglow.

She told her son later that Wednesday’s family frivolity was “the best day of my life,” but others like Thursday may top it with this driven, highly motivated golfer if his putting continues to improve.

Ghim, who plans to turn pro after the U.S. Open in June, will try to win Texas a second national championship in seven years first. And he has even more immediate business in the days ahead.

He’d never played this course before, save for a few practice rounds, including nine holes with Spieth. But he had two eagles in his first ever round. Two.

Spieth, by the way, has just two eagles at the Masters in his 17 rounds. And he’s pretty good.

Woods couldn’t do better than par on any of the four par-5 eagle holes Thursday. He’s not bad either.

But Ghim had two eagles and four crystal glasses for his handiwork as a reward.

“That was the first thing that popped into my head,” Ghim said.

He asked one of his playing partners, Englishman Sandy Lyle, if that was true. And the 1988 Masters winner told him he, indeed, had something for his trophy case. Ghim had joked a week ago about perhaps leaving the Crow’s Nest on Monday with some pencils or scorecards as souvenirs, but now he has something more substantial. Spieth joked the glasses “will be a big hit” back in Austin.

“So I come away with something with my name on it,” Ghim said, “and it’s not from the pro shop.”

Keep this up and win low-amateur honors over the other five, and he could take home a Silver Cup. But he’s not limiting himself.

“I’m going to embark on a new journey,” Ghim said, beaming. “But there’s so much golf to be played to make that the forefront of what I’m trying to do.”

He’s got bigger things on his mind.

Bohls: With Jordan Spieth’s touch, confidence restored, is this year’s slow start behind him?