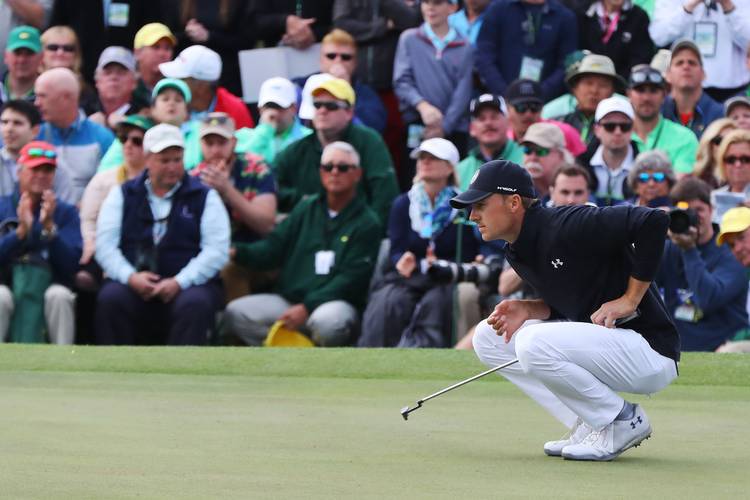 Jordan Spieth lines up his putt on the 18th green where he bogied to fall to 13 under for the round during the final round of the Masters at Augusta National Golf Club on Sunday, April 8, 2018, in Augusta, Ga. (Curtis Compton/Atlanta Journal-Constitution/TNS)

History will have to wait. So will Jordan Spieth.

The 2015 Masters champion flirted with the best round in tournament history and a second green jacket but didn’t win.

But his day might well be remembered more than the one of the man who did.

Playing dazzling golf until an errant drive clipped a branch of the towering pines on the final hole of his day and a final short putt missed by a whisker, the former Texas Longhorn gave the galleries at Augusta National thrills and chills in one of the most spectacular rounds in Masters history with a sizzling 64.

It just wasn’t enough. For the record or the wardrobe.

One shot off tying the record. Two shots behind the winner.

Patrick Reed, a putting machine on these slick greens, led the field with 22 birdies, ranked sixth in driving and three-putted just twice. And with a final-round 273, he scored a 1-under 71 for a one-stroke victory to hold off Rickie Fowler and Spieth to give the Masters a first-time major champion for the fourth consecutive year. He joins the Texas ex, defending champ Sergio Garcia and 2016 winner Danny Willett.

“It was a lot harder than I thought,” Reed said. “Did I think someone would put up that kind of round (that Spieth did)? No. It was kind of nerve-racking. I was glad he ran out of holes.”

That’s about all that spared Reed, who came close to a major with a runner-up finish in the PGA Championship at Quail Hollow last August.

The 27-year-old Texan has more personal baggage than Samsonite with his messy dismissal from Georgia over allegations of cheating and stealing and a public display of family dysfunction and estrangement from his own parents and sister. He might be the fiery Captain America for all his swagger and Ryder Cup success, but it’s the popular, magnetic Spieth whom this golf nation has embraced for his decorum as much as his dominance.

On the very first tee, Reed heard the louder cheers for his playing partner Rory McIlroy, who melted down with a 74, but he said that only “fed my fire.”

“He’s not scared,” Fowler said of Reed. “He’s a fighter, especially when he gets into contention.”

Even though he trailed by 10 strokes at one point Saturday, Spieth’s heroics on this crisp, cloudy day captivated the overwhelming crowds and put him in position to claim his fourth major, all before his 25th birthday. He’s still a PGA Championship away from the Grand Slam, but three majors ain’t slumming.

“From where I was two or three weeks ago to now has been probably the most successful couple of weeks I’ve ever had in my career,” said the rejuvenated Dallasite.

Spieth’s 8-foot par putt on No. 18 skirted the left side of the cup and ultimately denied him the course record of 63 that had been set by only two other men, neither of whom won the Masters, incidentally.

Greg Norman, who was the victim in the most colossal comeback story of all in 1996 when he blew a six-stroke lead on a Sunday; he had a first-day 63 that year before fading with a combustible 78. Before him, Nick Price had a third-round 63 in 1986 but finished fifth when 46-year-old Jack Nicklaus became the oldest Masters winner ever, topping Longhorn Tom Kite in the process.

While Spieth flirted with the biggest comeback in Augusta history after trailing by nine to start the round, he came oh so close to topping Jackie Burke Jr., who charged from eight strokes behind to win in 1956. Spieth went from Sunday afterthought to Sunday get-after-Reed, but fell short.

He never looked at the leaderboard.

“Didn’t look once,” he said. “I heard roars. I knew somebody was playing well.”

That somebody was him. As it is, Spieth’s dramatic finishes in his five Masters starts have gone like this:

No one has ever had quite the same instant success, save for Tiger Woods, who won twice in his first six starts here as a pro and returned here after a two-year sabbatical. Woods’ first five tours here as a pro went first-eighth-18th-fifth-first. Jack Nicklaus, fitted for six jackets by Augusta National, took awhile. His starts went 33rd-second-15th-withdrew-18th. He didn’t win till his seventh start.

By Spieth’s seventh start, he might be polishing his Hall of Fame speech.

While fellow Longhorn Doug Ghim won low-amateur honors, Spieth was gunning for low pro. But Reed’s a Texan as well, born in San Antonio and a resident of Spring. Spieth challenged with nine birdies in the first 16 holes, but it very easily could have been more fruitful.

“You come to learn you have to expect almost anything from him,” said Fowler, who went 65-67 the last two days. “That’s just Jordan. He put on a run.”

Entering the last day, Spieth said he expected a stress-free round, given his position, and for all practical purposes, it was. He played so flawlessly and with such ease that it seemed stressless.

Spieth birdied seven of the first 12 holes and came within a whisker of an eagle on the par-5 13th that would have drawn him within a single stroke of Reed. He was tied for a moment after his birdie on 15, but it didn’t last. That said, his closing 64 matched his opening round in the 2015 championship, and he’s put up a staggering seven rounds in the 60s out of just 20 times out.

“This round was fantastic,” Spieth said. “To be able to have a chance to win this tournament five years in a row is really, really cool.”

And he’s only getting started.

Golden: Spring game shows that the quarterback position is still a process at Texas