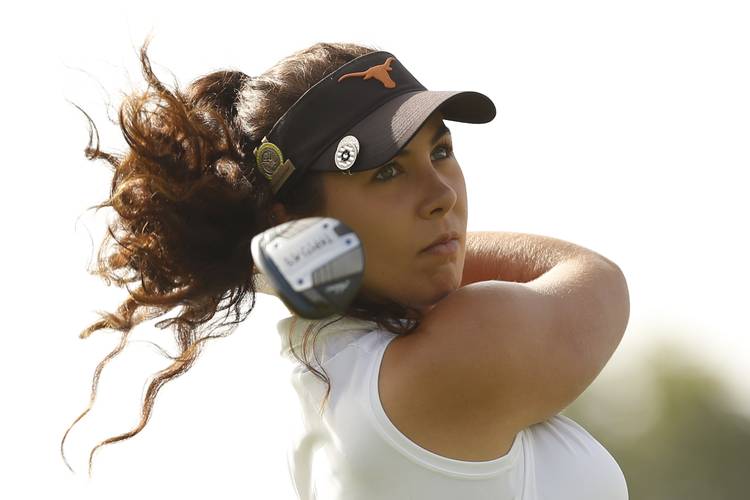 Sophia Schubert plays her tee shot on the 12th hole during the final round of match play at the 2017 U.S. Women's Amateur at San Diego Country Club in Chula Vista, Calif. on Sunday, Aug. 13, 2017. CREDIT: Steven Gibbons/USGA

The golf prodigy out of Oak Ridge, Tenn., had just withdrawn from the 2016 North & South Amateur at legendary Pinehurst after the then-Longhorns sophomore posted terrible scores of 79 and 87 in the first two rounds. After years of success, starting in the junior ranks and continuing with three state championships in Tennessee, Schubert’s game suddenly was in disarray. She was disconsolate and in a complete funk.

“She’d hit rock-bottom,” her Texas coach, Ryan Murphy, recalled. “She was in tears.”

To pull herself out of that dark place, she turned to Brad Rose, her respected golf instructor back in Knoxville who relies as much on tough love as technique in his no-holds-barred instruction. This wasn’t your garden-variety coach who showers his pupils with false praise.

In fact, the first time the 45-year-old teacher caught a glimpse of her loopy, over-the-top swing with a slice, he had a very pointed response.

“He’s super blunt,” Schubert said. “My swing didn’t look too good, and he didn’t mind telling me. In fact, he said the first time he saw my swing, he said he wanted to throw up.”

Rose laughs at that recollection but doesn’t dispute that she needed drastic help.

“We made a whole lot of changes,” Rose said. “Her putting, her grip, her full swing. She was way down.”

His stomach and her overall game both got well. Her natural draw came back. So did her confidence. And by the time Schubert returned to campus the next fall, she’d found her groove.

That junior season, she excelled. In an instant, this terrific ball-striker and irons player — who took her first 30-minute golf lesson before she was 4 with her older sister, Savanna, who also later played at Lipscomb — went from awful to All-American, which Murphy chose to use as a teaching moment.

Later last summer, Schubert became the first Longhorn to win the U.S. Women’s Amateur since Kelli Kuehne took home consecutive championships in 1995 and 1996; she qualified for four LPGA events, and was off and running with a career that has a huge upside.

“We got back to the airport from nationals,” Murphy said, “and I reminded her she’d gone from a withdrawal to All-American in 10 months. It’s remarkable.”

No less remarkable is the rise of Murphy’s women’s team in just his fourth season as head coach. Schubert, now at the tail end of her senior season, wasn’t even the best player on his team, albeit because of extenuating circumstances like December wrist surgery and a limited collegiate schedule of just six tournaments. She finished in the top five of four of them but went two full months before that without holding a club.

Murphy, a former pupil and assistant coach of Texas men’s coach John Fields with a stint at St. Edward’s in between, put together a loaded collection of talent that includes Lake Travis’ Kaitlyn Papp — the Big 12’s player of the year and freshman of the year — and All-Big 12 player Emilee Hoffman and has won back-to-back conference titles.

That will be on full display Monday at the UT Golf Club when the Longhorns host an NCAA Regional field of 18 teams and try to advance as one of six that will compete for the NCAA Championship in Stillwater, Okla.

“If we play well,” Murphy said, “we can compete with any team in the country.”

But it all starts with Papp and Schubert, Texas’ ultra-gifted freshman and senior. They’ll have to hold off top-seeded Arkansas and others at the Longhorns’ home course in northwest Austin.

“We’re really good, for starters,” Murphy said. “It’s rare to have five who can really play at a high level. Any one of them can win individually.”

Schubert’s teammates look to her for leadership as well as low scores. She’s the lone senior on the team.

“Her game is amazing,” said German-born Greta Voelker, who was last year’s Big 12 freshman of the year. “You watch her game and her focus. She’s constantly in a good spot on the course, never right or left.”

By winning the Women’s Amateur, Schubert proved herself and now will play in both the Curtis Cup and Arnold Palmer Cup this summer. In addition, she’s been invited to the Champions Dinner before the men’s U.S. Open at Shinnecock. She’ll play four holes at the course on Tuesday before the Open begins.

That’s how the gregarious, at times mischievous, Schubert rolls. Rose said she’s “a lot more fiery than people think. She doesn’t like to lose.”

Her playful sense of humor helps her during dramatic moments like when she snubbed her home-state Tennessee Volunteers and chose Auburn. Then, when her Tigers coach suddenly retired, Schubert transferred to Texas, which initially had recruited her as an eighth-grader.

“Yeah, I turned down Tennessee twice,” she said, grimacing.

An avid Tennessee basketball fan, she and her family regularly attended Vols games. She once told the Tennessee golf coaches she’d become a Vol if they’d introduce her to Tennessee legend Pat Summitt. She fibbed.

She also wanted to assert her independence when she left for Auburn initially, then was searching for a great program after her coach retired, and played in a tournament at College Station. So did you dislike College Station?

Save the hate mail. She’s just being playful.

She expects to have fun as well on the LPGA Tour, but she won’t show up just to compete. She’s won three tournaments at Texas and would like even more hardware as a pro.

“I expect she’ll do well,” Rose said. “She’s definitely got game. She’s got a ton of talent and she’s great under pressure. I’ve told her, ‘You’re damn good and act like it.’”

Schubert has. And now Rose no longer has an upset stomach.

The top six teams and three individuals not affiliated with those six teams advance to the NCAA championship (May 18-23, Stillwater, Okla.)

Bohls: At stake in Lubbock for Texas? A possible Big 12 baseball title and national seed, that’s all