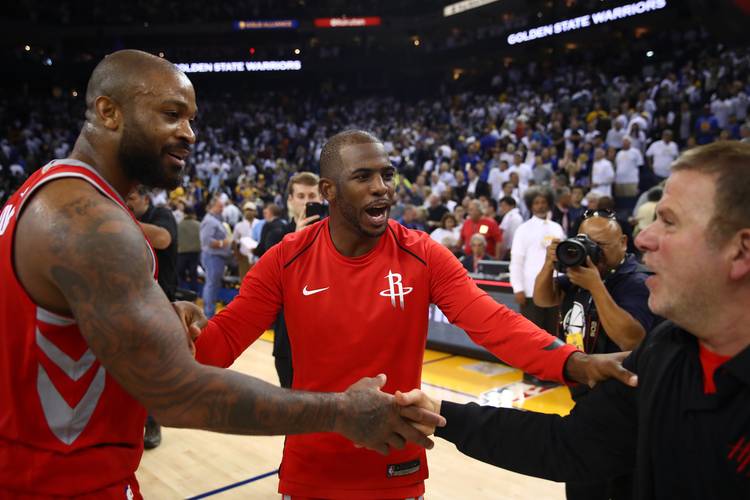 PJ Tucker (left), Chris Paul (middle) and team owner Tilman Fertitta of the Houston Rockets celebrate after defeating the Golden State Warriors 122-121 in their NBA game at ORACLE Arena on October 17, 2017 in Oakland, California. Tucker and Paul, who are former AAU teammates, have helped turn the Rockets into serious contenders in their first season as NBA teammates. (Photo by Ezra Shaw/Getty Images)

HOUSTON — James Harden listened until he couldn’t take it any more.

Point guard Chris Paul had just scored a playoff career-high 41 points along with 10 assists and seven rebounds and not a single solitary assist Tuesday night — the first NBA player to ever do so in recorded history — to pace his team to the Western Conference finals and unleash a torrent of red and white confetti at the Toyota Center.

Small forward P.J. Tucker had a special night of his own, scoring his own career playoff high with 19 points helped by a rare five three-pointers to outlast a pesky but undermanned Utah Jazz team in the series-clincher. And Paul absolutely gushed on his boyhood friend like a precocious schoolkid.

Just about the same time Paul is trying to shed his totally unwarranted label as a playoff flop with the cursed Los Angeles Clippers, so, too, is his childhood buddy working to create his own image as a journeyman player who has come into his own and completely transformed his game. Paul makes the magic, and Tucker rebounds, sets picks and guarded every Utah starter from a guard to center Rudy Gobert.

Together, they’re a perfect fit although Harden finally had all he could stomach.

Paul and “Tuck” have known each other since they were both 10 and growing up in Winston-Salem and Raleigh less than two hours away in basketball-rich North Carolina. And Tucker, Paul was quick to point out in a slight exaggeration, “was the same size then as he is now.”

They were teammates on the same AAU club and, Paul said with a quick glance Tucker’s way, were supposed to go to the same college although that didn’t pan out. Tucker, who could maybe reach 6-5 on his tiptoes but always had a rugged frame and an angry disposition on the court to go with it, wound up at Texas as a Rick Barnes find when the North Carolina schools were put off by his size and his lack of academic standing.

But Tucker’s always been a bull in search of a china shop. Had he been born in Texas instead of North Carolina, he might have wound up as the next Earl Campbell, as powerful as his thighs are and as strong as his motor runs.

He excelled in Austin as the Big 12 player of the year, but not without some adversity when he flunked out at midseason in 2005 the same time LaMarcus Aldridge’s bum hip cost him the season. While Paul was shining at Wake Forest, Tucker got nearly every rebound in a county mile as a Longhorn and sneered and hustled his way into the league as a second-round draft pick. But he didn’t stick immediately.

He took a circuitous route to Houston because his was a well-packed bag out of Texas. He hopscotched throughout Europe and the Middle East, winning championships in places like Israel. But neither Paul nor Tucker has sniffed an NBA championship.

Not until now, when they closed out a really talented Utah club and its wunderkid, rookie Donovan Mitchell, who went off in the third quarter with a 22-point outburst that kept the Jazz in the game. Now the public is savoring a Houston-Golden State showdown, starting Monday in Houston, for a berth in the NBA Finals.

“It means everything,” Tucker said.

Jazz coach Quin Snyder said Mitchell “plays with joy,” and he’s right. But they weren’t nearly as giddy as Paul and Tucker on the night both advanced to a conference final for the first time in their careers.

And it’s hardly coincidental that the pair were reunited in Houston at the same time. Apparently Paul’s as good a recruiter as he is a scorer. While he was signing off on a deal to leave the Clippers for the Rockets last offseason, he also nudged Rockets general manager Daryl Morey to try to add Tucker as well.

The Rockets coach had come close to a title of his own in Phoenix when his “Seven Seconds or Less” offensive machine fell short, partly because of the few seconds in pivotal Game 4 of 2007 when his players Amare Stoudemire and Boris Diaw came off the bench after a hard Robert Horry foul on Suns star Steve Nash. That lapse cost those players a suspension and any chance at knocking off the Spurs, who ultimately creamed the Cavaliers for a championship that might have been D’Antoni’s.

He has another great opportunity now, and he has a future Hall of Famer like Paul and a rugged, versatile forward like Tucker to thank for it. Oh, along with a likely MVP in Harden, too.

“I’ve known P.J. a long time and have tremendous respect for him,” said Snyder, who coached at Missouri and with the Austin Spurs G-League team. “And he’s improved his shooting over the years. He wasn’t doing that at Texas. But he does it now.”

“He’s been a bear all season,” D’Antoni said. “And he was knocking down shots tonight. Plus, always his defense, his spirit, rebounding and all of that, it’s always there.”

And no twosome is happier than the pair of 33-year-old North Carolinians inching ever closer to a championship.

“It’s cool,” Paul said, “and special to get a chance to do it with a guy I’ve been with since we were little.”

Golden: So, did you hear the one about the Augie Garrido tribute bash?