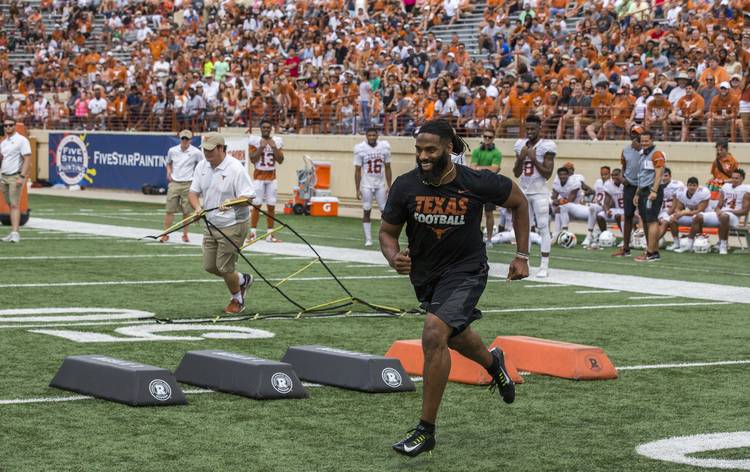 Texas Longhorn legend Michael Griffin competes against a student during the Orange and white spring football game at the Darrell K Royalâ€“Texas Memorial Stadium on Saturday, April 15, 2017 RICARDO B. BRAZZIELL/AMERICAN-STATESMAN

It’s 1:45 on a hot Tuesday afternoon, and the co-owner is running a little late for our interview. He had to run an errand up north but is on the way, he texts.

About 15 minutes later, Michael Griffin rolls up atop a 2016 BMW S1000 motorcycle with a sticker bearing his familiar jersey No. 33 on the left windshield. He’s back in his hometown after taking his family to Nashville for his retirement ceremony as a Tennessee Titan. With wife Shantel and his three kids by his side, No. 33 retired at age 33 after he signed a one-day contract with Tennessee, where he playing 141 games over nine seasons.

A self-described civilian now that he’s no longer playing pro football, Griffin joined former UT and Titans teammate Brian Orakpo in partnering with fellow Texas ex Bryan Hynson to open a Gigi’s franchise in February. Football wasn’t going to be forever, a reality Griffin has discussed at length with Orakpo, a Titan linebacker who will begin his 10th season this fall.

Griffin didn’t embrace the idea of putting his body through the rigors of getting ready for an 11th NFL season, but stepping away from the game was tough because of the relationships he developed at Tennessee

“It’s the camaraderie that I miss the most,” he said. “It’s the boys, the teammates you played with. It may not be the outcome you wanted, but it was the memories you made together.”

The two-time Pro Bowler grabbed 25 career interceptions and returned one 28 yards for a touchdown against Pittsburgh’s Ben Roethlisberger back in 2008, when he was named second-team All-Pro. Tennessee’s all-time leader in tackles by a safety (912) played 13 games with the Carolina Panthers in 2016 and was preparing for another season in March when a conversation with his then-6-year-old daughter got his attention. She wasn’t adjusting very well to first grade at a new school in Austin after spending most of her young life in her mom’s hometown of Nashville, where she had plenty of friends and cousins. Worse yet, the daddy’s girl had seen her hero only four times during the previous football season.

Just like her dad, Mya Griffin is a straight shooter.

“Daddy, I don’t want you to play football anymore,” she said.

Son Braylen, who will turn 10 Tuesday, was fine with Dad continuing as long as it was with the Dallas Cowboys.

Mya said what Shantel — who was then pregnant with Mikenzie — had been thinking for some time, according to her husband, who had played in 154 career games. One of the league’s most durable players played 103 consecutive games between 2007 and 2013 and missed only three games in his career, one coming via suspension for a helmet-to-helmet hit.

“You don’t want to be the reason he resents retiring, so I didn’t want to push it too much,” Shantel said. “I knew it was a decision he had to make, so I wanted him to come to it on his own.”

A big hitter who never strayed from contact, Griffin was diagnosed with only two concussions in his career.

“Just two officially but I did get woozy a few times,” he said.

It was time. Griffin has read the stories and knows through 20-plus years of playing tackle football how the game takes a toll on the body over time and, in many cases, how that toll manifests itself in ugly fashion by middle age.

He has options. His connections at Texas — he has a bachelor’s degree in youth and community studies — will benefit him in whatever vocation he chooses. He says he’s interested in coaching, having applied for an internship with the Titans. I’ve been to his annual football camp over the years, and he doesn’t sugarcoat it when dealing with players who have dreams of playing the game beyond high school.

Twelve years after intercepting USC’s Matt Leinart on the goal line in the BCS national title game win, Griffin, who still maintains his longtime hobby of breeding dogs, made a great decision to leave since he’s basically a pup in non-NFL years.

Oh, and in case you’re wondering, his twin brother, Marcus, a former teammate at Bowie High and Texas, is working for Homeland Security.

He was always the smartest twin, I said.

Equally important in the retirement decision is financial stability. Griffin has taken care of his money. He made over $42 million in salary and didn’t overspend like many young millionaire athletes are prone to do. Conversations as a young player with Titan veterans Keith Bulluck, Nick Harper and Chris Holt persuaded the 19th overall pick of the 2007 draft to guard his dollars carefully. To that end, it comes as no surprise that the Griffins live in the same Meridian neighborhood in the same four-bedroom home he purchased a decade ago.

“You have to start a lifestyle and maintain that lifestyle,” he said. “Seventh-round picks shouldn’t hang out with first rounders. You don’t see me wearing any jewelry. I have one expensive car but not a whole lot of them. I’ve lived the same way for years.”

These days he rides the bike around the neighborhood and spends plenty of time playing ball at his local gym. One of the biggest issues facing most former pro football players is how to find their identity once their playing days are over and, better yet, how to fill up a day.

That’s an easy answer for one happy civilian.

Active NFL players who were on the Longhorns’ 2005 national championship team:

Colt McCoy, QB (Washington): After rewriting the passing section of the UT record book, McCoy has appeared in 35 NFL games, 25 as a starter. He has thrown 26 touchdowns and 23 interceptions.

Roy Miller, DT (free agent): The 2008 Fiesta Bowl defensive player of the game has played in 119 NFL games and has registered eight sacks and 170 tackles. He appeared in seven games with the Chiefs last season before being released.

Golden: So, did you hear the one about the Augie Garrido tribute bash?