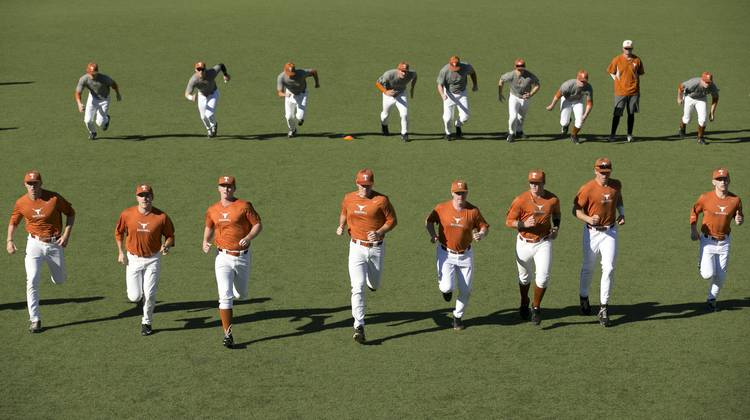 UT baseball players warm up on the first day of practice at UFCU Disch-Falk Field on January 29, 2016. This year's team has a shot at starting the NCAA postseason by hosting a regional at home. JAY JANNER / AMERICAN-STATESMAN

The Texas Longhorns can win a Big 12 regular season baseball title this weekend, but need a little bit of assistance to make it happen.

Even if it doesn’t happen, Texas can make its postseason outlook much rosier if it earns one of 16 regional home sites that will be handed out in a couple of weeks.

UFCU Disch-Falk Field hasn’t hosted one of these things since the 2011 season which ended with a College World Series appearance, and while the focus has to be on the well-respected TCU Horned Frogs — who have ended their last four seasons in Omaha — you can’t help but think how David Pierce’s much improved group is feeling with a chance to win its first Big 12 regular-season title since … you guessed it, 2011.

If Texas, at 14-7 in the conference, can take two out of three from the Horned Frogs and have first-place Oklahoma State (16-5) drop three to Texas Tech, then the Horns will not only claim a share of the title but also earn the top seed in next week’s Big 12 tournament because of tiebreakers.

RELATED: Memorable moments aplenty as No. 17 Texas returns to action with a win over Texas State

“We talk about it,” junior infielder Kody Clemens said. “I think everyone knows what’s ahead of us. We just need to play this series game by game and hopefully get a regional spot and be a regional host.”

It’s a good conversation to be having. Pierce had a gleam in his eye during Wednesday’s media availability when he talked about how his pitching staff is developing the type of depth needed in a tournament situation and also how the Horns, owners of a league-best 34 wins, came back from a lengthy break to take a win over Texas State on Tuesday.

The postseason will get here soon enough, so the priority is getting after the Horned Frogs, who have dominated this series of late. Over the last four years, the Horns are 4-13 in head-to-head meetings. It’s a nice rivalry with its share of tense moments, including that 2010 super regional in Austin that ended with the victorious Horned Frogs dancing on the Longhorns logo in the outfield instead of the pitcher’s mound where you see most baseball celebrations take place. Augie Garrido didn’t say it that day, but he wasn’t happy with that display.

Just like his predecessor, Pierce is a big believer in playing great teams to gauge what needs to be fixed by the time the money games start. He scheduled Stanford and Arkansas for this season and the next, and while the Horns could muster only one win in those six meetings, it showed the players how much needed to be done to get things right.

Pierce is hopeful the NCAA tournament selection committee — Texas athletic director Chris Del Conte is a part of the group — will take that into consideration when handing out home bids. According to Boydsworld.com, the Horns are 21st nationally in RPI, an excellent ranking when one considers they have played 25 games against teams ranked in the top 50. Texas is 12-13 in those games, by the way.

“Stanford and Arkansas, they’re top-five teams,” Pierce said. “It’s one thing scheduling a top-50 team but I think there ought to be some consideration to not only scheduling a very quality non-conference schedule but to look at the intent and then look at where those teams are and look at the number of games we’ve played against the top 50.”

No argument here. Here’s what we do know: The Horns will submit a nice bid to the committee and Disch-Falk would be filled for that regional, making it television-friendly. Win and the rest will take of itself.

The Horns hosted nine regionals between 2000 and 2011, if we’re including the 2007 tournament that was at Dell Diamond. Texas went 7-2 in those matchups and advanced to Omaha in four of those seasons, winning a national title under Garrido in 2002. Garrido’s other title here came in 2005 after winning the Austin Regional then taking out Ole Miss in Oxford.

Pierce wanted to make sure and put it out there that the Horns aren’t overlooking the Frogs, who lost their best player Luken Baker to a broken leg in April. TCU sits at 10-10 in the conference and could really bolster its NCAA chances with a good showing in Austin.

“They’ve won 30 games, not to say it’s the standard of where they’ve been the last few years, but they’re a very very quality team and they know how to coach and they know how to play the game,” he said. “We’re not taking anything lightly and we understand we have to do everything right to have the opportunity to position ourselves (to win).”

With that said, it’s cool to talk about the Horns being in the hosting mix again. It’s been a minute.