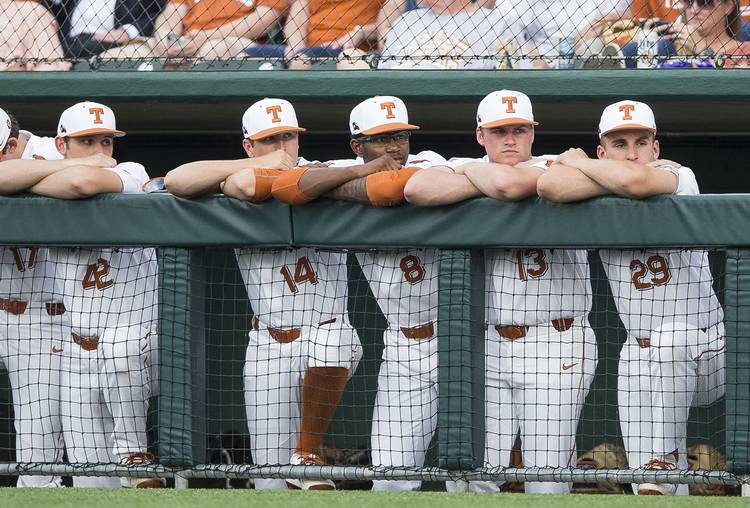 He’d done all he could and more in Game 1 of the NCAA baseball regional at Long Beach State last May, but after throwing masterfully for almost eight innings and pacing Texas to a clutch victory over UCLA en route to a 2-0 start that weekend, all he could do was watch.

“I was basically a mom in the stands,” recalled Kingham, Texas’ junior ace and one of only a handful of Longhorns who played in that 2017 regional.

While Kingham could do nothing to prevent two consecutive losses to the host Dirtbags and the premature ending to Texas’ season, he’ll be front and center on the mound along with several other holdovers from the 2017 roster this go-around, including slugger Kody Clemens, shortstop David Hamilton and third baseman Ryan Reynolds.

Kingham may not start against fourth-seeded Texas Southern on Friday night because coach David Pierce might roll the dice and go with his No. 2 or No. 3 starter, Chase Shugart or Blair Henley. Pierce is still mulling it over, trying to figure out how best to control the Tigers’ impressive running game with their 117 stolen bases, and could go with Shugart, who has four pickoffs this season.

Whatever the case, Texas is out to distance itself from last year’s heart-breaking ending.

Before that tough conclusion in Long Beach, Kingham wanted to grab a bat like he did when he was a shortstop and outfielder for his Desert Oasis high school team in Las Vegas and hit .421 as a junior. But he’s a pitcher now and his team fell short. His reaction?

They were close. But their offense let them down, unlike this year when Texas’ bats are propping up the team. They’ll have to because this is not an overpowering club.

“Me, Blair and Chase are not having the year we expected to have,” Kingham said. “But our offense has picked us up. Moreso, it’s been them bailing us out.”

Shugart was less philosophical about last May.

“We were crushed,” he said. “I remember saying goodbye to all my friends. Kacy Clemens is one of my best friends. So’s Bret Boswell. We learned to make the most of every moment. We want to make some memories we can tell our kids in 20 years.”

They’ll get another chance, starting Friday night against a heavy-hitting, hard-running Texas Southern team in a regional that also includes pitching-strong Texas A&M and Indiana. The Aggies were an impressive 3-1 in the SEC tournament after losing four of five league series, and the Hoosiers have big-time power with 61 deep flies to go with top pitching from ace Jonathan Stiever and others.

“We’re not good enough to just show up and beat anybody,” Pierce said.

Only two full-time starters who played in that Long Beach regional return — Reynolds and Hamilton, although Clemens started one of those four games. So Texas doesn’t have all that much experience in the field as far as NCAA tournament play but it does have an endless supply of resilience and grit that helped it overcome a 9-9 start to the season and a grueling schedule for the school’s first Big 12 championship in seven years.

Kingham, Shugart and Henley all pitched well in Long Beach with a combined 1.72 ERA and 13 strikeouts in 15 1/3 innings. Beau Ridgeway did as well with a save and solid relief but has vanished this spring with an 11.32 ERA and no substantial role.

Their teammates at the plate, however, were not nearly as proficient. Texas bowed out after scoring just four runs in the two regional losses, and most of the offensive damage came off the bats of seniors like Boswell and Zane Gurwitz. Outfielder Austin Todd also played at Long Beach, but he still hasn’t returned from a separated shoulder. Those three scrapped out just two hits in 34 at-bats with eight strikeouts.

Clemens, this year’s clear Big 12 player of the year with 19 homers and a .341 average, started one game of the regional as a DH and was hitless in four at-bats overall. But he relishes the chance to rid himself of that memory.

So Texas (37-20) approaches this regional with fresh memories of that bitter taste as well as the knowledge that it is 27-7 at UFCU Disch-Falk Field and has won 15 of its last 16 home games. If anything, the script has been entirely flipped this season.

A program fashioned around pitching has switched to an offensive-oriented ball club that has overcome inconsistency on the mound although Pierce has meticulously formed a successful bridge to the end of the game with short relievers Parker Joe Robinson and Josh Sawyer and closer Andy McGuire.

McGuire, a Longhorn for the second time in his career, wasn’t yet sure to return to Austin, having transferred to South Carolina Aiken. He was playing summer ball in Baltimore when he tuned in to root for the Longhorns.

“We probably all have a little chip on our shoulder going into the regional after letting last year slip away,” said McGuire, who has seven saves.

Few expect any carryover from last week’s quick elimination from the Big 12 tournament with losses to Kansas and Oklahoma. This, after all, is a confident team that knows only too well that the end can come abruptly.

Bohls: Texas vs. Texas A&M in baseball? Hey, this could be the start of something good …