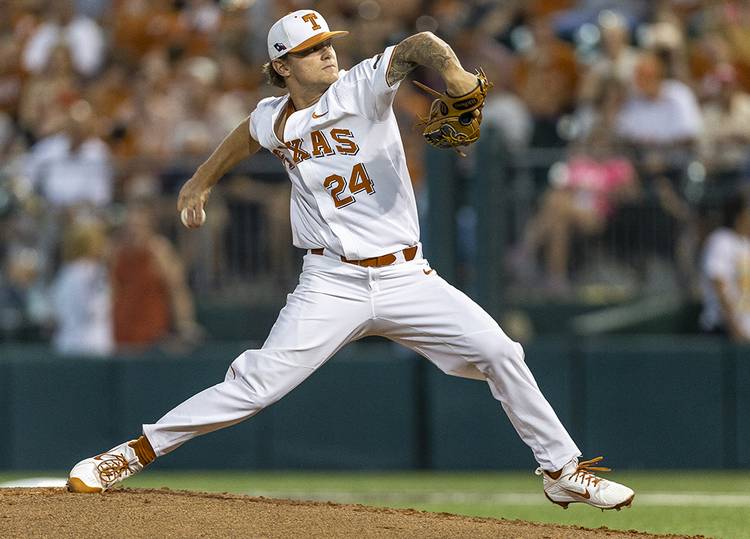 If one didn’t know better, Texas was trying to show up his opponent. That’s how spectacular the top-seeded Longhorns were at UFCU Disch-Falk Field to open play in the Austin Regional before a delighted crowd of 6,914.

The Longhorns had a little bit of everything and a whole lot of runs.

“For us to be able to execute the way we did and be that efficient was about as good as you could expect,” Texas coach David Pierce said. “Our team has the ability to control themselves and build off one another. ”

What’s not to like? A combined shutout by Chase Shugart and Matteo Bocchi on a five-hitter. And hits from every one in the order except Ryan Reynolds and 11 hits overall. Perfect defense.

By the time the game ended, Texas had scored on a three-run home run and on a steal of home for the first time in seven years and cruised to a ho-hum, 10-0 beatdown of fourth-seeded Texas Southern. Pierce had bragged Thursday about his offense’s creativity, and it was evident with runs off long balls, steals, errant pickoffs and bloop singles.

When they weren’t walking eight times — four of whom scored — Reynolds was striking out four times, three of them looking. D.J. Petrinksy blasted a three-run homer. David Hamilton stole home for the first time in his life.

As always, Texas has its stellar defense at work, and Shugart even got into the act by spearing Ryan Diaz’s one-bounce come backer with his bare hand and starting a 1-6-3 double play that even impressed his coach. “I have to admit,” Pierce said, “that was a pretty dad gum play.”

Of course, Reynolds at third base tried to one-up his pitcher by then bare-handing a slow roller and throwing out Gaudencio Lucca at first.

Gloves are optional for these Horns.

The bats seemed to at times as well, considering how wild the Tiger pitchers were and the nine times Texas struck out.

These are the integral parts that, combined together, make for a pretty compelling ball club. How compelling?

That will be answered when Texas faces that other team.

Most would call it the main event when the Longhorns and Aggies convene Saturday night for the inside track of this Austin Regional and a 2-0 start in this double-elimination affair. What’s really interesting is each club scored 10 runs and got dominant six-inning performances from its starting pitchers in the Friday victories. A&M led by seven after four innings; Texas led by six after four.

The two are not all that different except A&M may have better starting pitching, Texas may be stronger in the bullpen and the Longhorns have no peers on defense. And don’t forget the fans.

A&M had a near-perfect first game itself when new-found ace and budding left-handed star John Doxakis had 12 of the Aggie pitchers’ 17 strikeouts, and a seven-run fourth inning propelled the SEC team to a 10-3 rout of second-seeded Indiana. Plus, they played the early game and got more rest than Texas but did play in the 100-degree heat of the afternoon.

Of course, some would say the night game wasn’t exactly a strain for the Longhorns, and it wasn’t. They pretty much posted a flawless performance.

They got an easy win to advance and avoided any stress.

They got just enough out of Shugart and saved him for later use in the regional since he was smartly lifted after just 69 solid pitches through six innings. He allowed a bunt single, an infield single and a hit batter in the first five innings. “I was composed, I was pitching with emotion, with that edge I usually have, and I was in my rhythm,” Shugart said.

They got another day of rest for ailing No. 1 starter Nolan Kingham, who’s “getting the ball,” Pierce said. “He’s ready.”

They got rid of any regional anxieties before they face their arch-rival in Saturday’s pressure-cooker.

“It definitely wasn’t one of our better nights,” Tigers coach Michael Robertson said. “We had a huge giant in front of us in Texas, and Shugart was huge tonight.”

Texas, for once, needed no offensive punch from slugger Kody Clemens, instead turning to Petrinksy for the big hit. And boy was it big.

Petrinsky absolutely crushed a three-run homer over the left-field fence and almost into the Texas Tennis Center. At that point, it was point, set, match as the big bomb gave the Longhorns a comfortable 5-0 lead that grew to a six-run advantage when Duke Ellis rifled a single up the middle for another run later that same inning.

Not that this mismatch was any surprise.

Texas Southern entered the contest with a pedestrian 27-26 record that comes with over-scheduling like the Tigers do to boost their RPI and steady their nerves for games like Friday’s. They have no home field, playing in a city field just five minutes from campus usually in front of no more than 200 friends and relatives. They played seven games against Big 12 opponents, losing all seven.

“We had 11 strikeouts as an offense,” said TSU’s Kamren Dukes. “That’s not very good. They flat out played better than us. I do not know if we were ready coming into the game with the atmosphere, but there are no excuses for that. But it is electric.”

Bohls: This K Clemens krushed it to beat the Aggies