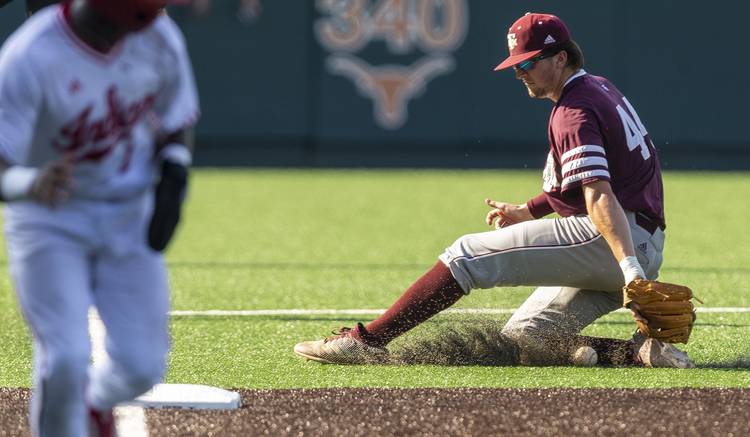 Texas A&M's George Janca goes to a knee to stop a grounder by an Indiana hitter Friday in the Aggies' 10-3 win at the NCAA Austin Regional at Disch-Falk Field. (Stephen Spillman / for American-Statesman)

Rule No. 1 of regional tournament play: Save those arms.

A pitcher who can give his team a quality start in the first game can instantly become the most popular guy in the clubhouse.

Check that box for Texas A&M sophomore left-hander John Doxakis, who had no problems in that department long before he shut down Indiana on Friday.

The Aggies, who hope to leave here with a chance to become the first team in school history to advance to the College World Series in consecutive seasons, did themselves a huge favor by not stubbing their toe before any potential showdown with the top-seeded Texas Longhorns.

With Doxakis (8-5) doing the heavy lifting, head coach Rob Childress has things just how he wants them entering Day 2: a 1-0 record in the regional, a well-rested pitching staff and plenty of confidence after getting through that all-important first outing. Teams have advanced to Omaha through the losers’ bracket, but none preferred that route, to be sure.

The Hoosiers did make some noise with a pair of homers from third baseman Luke Miller off two different relievers in the latter stages, but the damage had already been done because of their inability to figure out Doxakis, who had already topped his career high in strikeouts in the fifth inning. He struck out nine of the first 12 batters he faced, and four were caught looking. He did plunk ninth-place hitter Jeremy Houston in the third — ending a perfect game bid for you romantics out there — but picked him off first base soon after.

Doxakis’ dad, Dean, is the Southwest regional director for Tom House’s National Pitching Association, so he’s been around an arm or two in his day. His teammates exploded for seven runs in the fourth inning, and judging by the way he was throwing at the time, Doxakis didn’t need that many. He outdueled Indiana ace Jonathan Stiever and made it look remarkably easy.

About that popularity line: Doxakis and his teammates have used their platforms as college baseball players to make their community better. They continued a four-year tradition of shaving their heads in February to raise money for the Vs. Cancer Foundation and the pediatric wing at MD Anderson. Doxakis also solicited more than $1,200 on his own page.

He continued to be money on the mound and had plenty of help from his teammates and struggling Indiana center fielder Logan Kaletha, who had a bad day at the office as he either misjudged his reaction time to balls hit his way or the power of the Aggie bats. Kaletha, playing shallow, a few steps behind the huge Augie Garrido logo, allowed two balls to sail over his head — Zach Deloach’s bases-loaded double in the fourth and Logan Foster’s double in the fifth.

The Hoosiers, who finished fifth in the Big Ten, hadn’t given up double-digit runs in a game all season. Until Friday.

It was more than enough for the Aggie cause.

A&M coach Rob Childress said Thursday that the choice to start Doxakis came because he has pitched as well as anyone on the staff. He referred to him as A&M’s hot hand, and who could blame him? Besides ranking fifth among SEC pitchers in earned run average (2.89) and eighth in opponents’ batting average (.221), he smothered No. 21 Auburn in the SEC Tournament last week, allowing no hits through the first 7 1/3 innings. He ended up with a two-hitter and gave up one run with 10 strikeouts.

“We played a complete game and it all started with John,” said head coach Rob Childress. “He was outstanding.”

Any road to Omaha is much easier with quality pitching and good management of the staff. Childress was a master at such things in his eight seasons at Nebraska — the Cornhuskers played in three College World Series with him as the pitching coach — and now he is at the controls of the one of the better staffs in the NCAA Tournament. The Aggies landed the first important blow of the weekend thanks to their hottest arm.

Bohls: Texas vs. Texas A&M in baseball? Hey, this could be the start of something good …