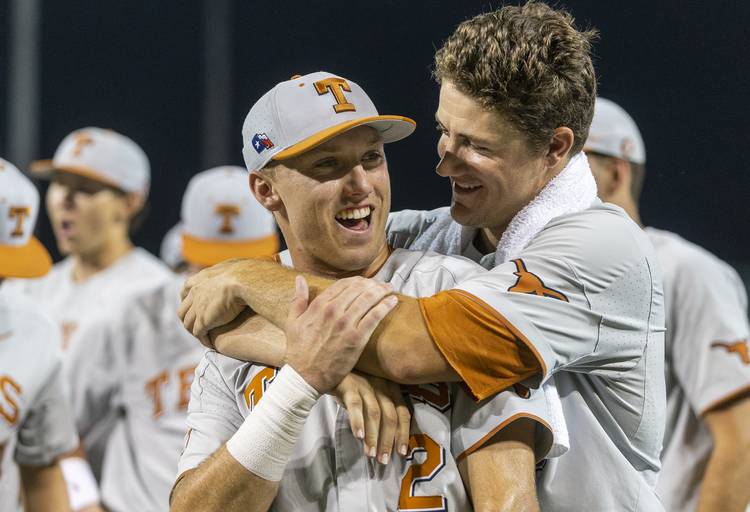 Kody Clemens didn’t prepare when it was announced Monday morning that Texas A&M would be trespassing into UFCU Disch-Falk Field.

“I just want to bottle him up,” his coach, David Pierce, said.

“He’s incredibly competitive and has a great approach,” the rival coach, A&M’s Rob Childress marveled. “He’s a baseball player, and he loves the moment. He was certainly the difference in the game.”

With a showdown against blood-feud rival A&M in the biggest game of the year, Clemens reserved one of his most heroic performances with four RBI and three hits, two of them monster home runs to carry top-seeded Texas past the Aggies in an 8-3 waxing that kept the Longhorns in the winner’s circle of this Austin Regional.

It’d be wrong to say Texas Justin Tuckered the Aggies if only because this was over long before it was over and Texas needed no late heroics. Just as in the 10-0 win over Texas Southern the night before, the Longhorns broke to a 7-1 lead after five innings and never looked back.

This is the kind of games where legacies are made. Consider Clemens’ legacy made. And remade.

Clemens mashed a three-run home run over the right-field wall in the very first inning for unwavering momentum and uncorked a cloud-seeder almost as high as it was long for a solo shot again in the sixth to pad the locals’ lead.

And it wasn’t enough that his opening bomb put Texas up 3-0 just three batters into this combustible matchup with the Aggies, Clemens couldn’t help but stare menacingly into the A&M dugout after rounding third base. I’m guessing they blinked back.

“I was kind of just in the moment,” he said. “I’m super competitive. You get kind of emotional, but it’s  just heat of the moment.”

Not even Childress seemed offended.

“If you don’t like it,” he said of his players, “make a better pitch.”

And Clemens wasn’t done, adding a solo shot and an infield single later.

But then he homers a lot. He’s gone deep now 21 times this season, hitting an amazing 15 of them at a ballpark that swallows up fly balls and laughs at hitters for good measure. Even with the fences moved in slightly two years ago, you just don’t consistently launch home runs out of this cavern, which ranks right below the Grand Canyon for toughest places to hit out of.

But Clemens does. And his long balls are meaningful.

Consider this: of his 21 home runs, 20 have come in victories. Only a shot in a loss to LSU came without true success.

Little wonder Clemens became the first Longhorn position player to be named first-team All-American in 11 seasons since outfielder Kyle Russell in 2007. Russell also was a power hitter, but no one expected this burst from Clemens after just five homers a year ago.

“At this place it’s hard to become an All-American,” Pierce said on Thursday. “He’s stayed so grounded with this team and been the right kind of leader. I love you, man.”

Pierce likened Clemens’ season to the freshman year of powerful Rice third baseman Anthony Rendon, who hit 26 homers before reaching the majors with the Washington Nationals. “So what Kody’s doing right now is pretty remarkable.”

In the pure sense of the word, Clemens is a professional hitter. And he will be in every sense of the word in the coming weeks after he almost certainly will sign with a major-league club following this month’s draft. Even the Kansas coach joked at last week’s Big 12 Tournament that he’s glad Clemens won’t be back next season.

Most sources project Clemens to be selected between the third and fifth rounds, but that may be too low for a proven college infielder with tremendous upside as a left-handed swinger. Some scouts see him on a pronounced upswing with quick hands, tremendous pop and obvious championship DNA as the son of a 7-time Cy Young Award winner.

Few if any expect Clemens to return, but he’ll have time to make that decision because he and his Longhorn teammates have plenty of unfinished business this month. Texas Southern coach Michael Robertson was resigned to his loss to the Longhorns and said “they’ll probably win the World Series.”

They’re still a long ways from that but now just three wins away from Omaha, needing a win Sunday night against the survivor of the A&M-Indiana elimination game to advance to a super regional. But they’re showing signs, especially with their suddenly blossoming offense, of peaking at just the right time and making a huge post-season run.

As good as Clemens has been and leadoff man David Hamilton before him with four hits in two games, the bottom of the order has really surged. D.J. Petrinsky, Tate Shaw and Jake McKenzie combined for five hits, three runs and a pair of RBI to keep the pressure on the Aggies.

“We’re getting more production out of seven through nine in that order,” Pierce said. “Four through six, maybe it’s their turn tomorrow.”

Of course, when isn’t it Clemens’ turn?

Golden: Aggies on the brink. Will we see a Texas rematch?