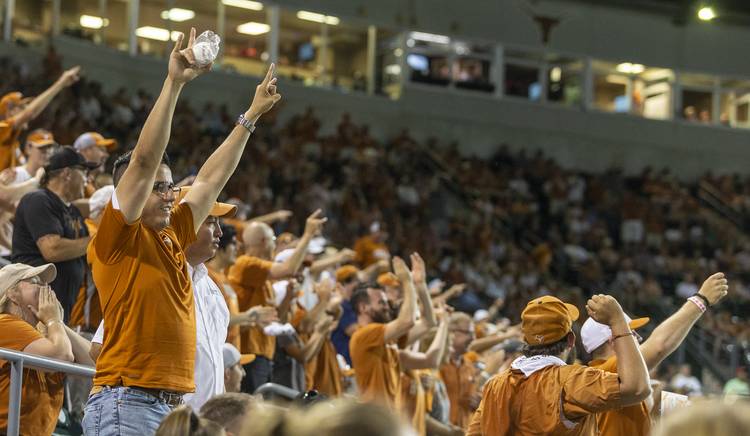 Texas fans cheer in the final moments of 8-3 win over Texas A&M during an NCAA Austin Division I Regional game at Disch-Falk Field, Saturday, June 2, 2018. (Stephen Spillman / for American-Statesman)

The chants rained down from the stands in the top of the eighth inning Saturday night.

Only this time, it came from the lungs of Big 12 fans.

Texas A&M got hit in the mouth in enemy territory and it hurt much more than that softball that introduced itself to the nose of Green Bay linebacker Clay Matthews earlier in the day. The success-starved Longhorns are smelling blood after the 8-3 win and are not shying away from delighting in drawing first blood before a packed house of 7,046 at the Austin Regional.

While the Twitterverse raged over whether or not there was more to Saturday afternoon than just a baseball game — it’s still a blood feud from the eyes– the Aggies were dominated at the Disch, snapping a 10-game winning streak in regional play that dates back to 2015.

Hey Aggies, please do us rivalry revelers a big favor: beat Indiana and give us Round 2.

Nothing excites a sports fan more than a good old-fashioned hatefest and while these two haven’t played in a football game since Justin Tucker’s kick beat the Aggies at Kyle Field in 2011, the buzz at Disch-Falk Field was palpable despite game-time temperatures that soared north of 100 degrees.

Clemens’ infield pop was ruled a hit but it was the least impactful of his three. The other two soared over the right-field wall and the first bomb — a three-run shot off A&M starter Mitchell Kilkenny —  included an extended glare into the Texas A&M dugout from the cocky Clemens as he rounded third base.

Had it been a heavyweight title fight in Vegas, the referee might have stepped in and stopped it. Texas played with house money the rest of the way while the Aggies were left to answer questions about Clemens’ eye-gloat of a home-run trot.

“We’re all competitive,” said A&M coach Rob Childress. “It’s Saturday night in the regionals. We all live for it it. If you don’t like it, make a better pitch.”

Game recognizes game, friends. Childress doesn’t mind tipping his hat to a baller but the time for pleasantries has passes because his team has shifted to eliminator mode. The Aggies can’t even think about a rematch until they get past the Hoosiers, who eliminated Texas Southern earlier in the day.

The Aggies have very little title time to get things back on track offensively after Texas starter Nolan Kingham went from the infirmary to in-firm-control of every pitch in his bag over 7 2/3 masterful innings.

“We kind of beat ourselves,” said second baseman Michael Helman. “We just let (Kingham) settle in and then it kind of kept going their way. We weren’t the team we that we should be.”

Texas was the top seed but No. 3  A&M has had more juice over the last few seasons. Besides the TCU Horned Frogs, who have advanced to Omaha for four straight years, the Aggies have been the most consistent program in the state. Meanwhile, the Horns were hosting a regional for the first time since 2011.

Texas ended its on-field association with the legendary Augie Garrido and hired David Pierce after the 2016 season. Meanwhile, the Aggies were in the middle of winning three straight regionals, including an appearance in the 2017 College World Series. A fourth is seriously in question.

If anything, the Aggies can call upon recent history if they are to keep alive their hopes of returning to Omaha for a second straight season for the first time in program history.  Back in 2015, they lost to the Cal Golden Bears in 14 innings of a winner’s bracket semifinal before winning three straight, including a 3-1 triumph over the Bears behind lefty starter Matt Kent, who threw seven innings on two days rest.

The current crop has a tougher task at hand. That 2015 comeback took place at Olsen Field. These aren’t exactly friendly confines. A&M is 2-4 at Disch-Falk dating back to 2010 but unlike Saturday, there will be no second chance with another afternoon loss.

Bohls: This K Clemens krushed it to beat the Aggies