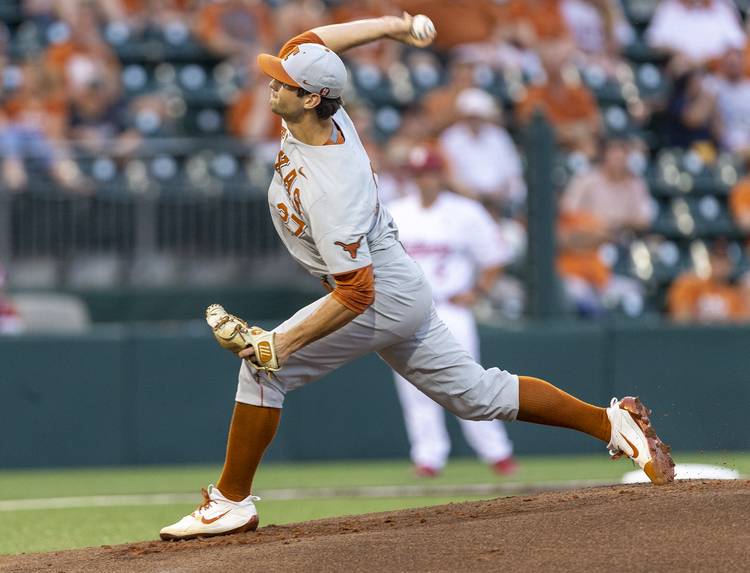 This time the Texas starters bailed out the bullpen.

Turnabout, in this case, was more than fair play.

It was spectacular play as Blair Henley, the Longhorns’ erratic No. 3 starter, and Friday starter-turned-gutsy closer Chase Shugart combined to stifle a potent Indiana offense that had put up nine runs in the first inning to eliminate Texas A&M in the afternoon game and advance Texas to its first super regional in four years with a 3-2 heart-pounder Sunday night.

Of course, the 6,855 rabid fans at sold-out UFCU Disch-Falk Field knew it would ultimately come down to pitching if the Longhorns were to move on in the NCAA post-season. It always does.

And it was with emphatic performances for three consecutive games when Nolan Kingham, Henley, Shugart and Co. impressively struck out 37 batters with only two walks in the entire Austin Regional. Two. That’s mind-boggling.

When a reporter pointed out that staggering fact in such pressure-cooker conditions, tournament MVP Kody Clemens shook the hands of Henley and Shugart on the post-game dais during the press conference. Texas scattered nine Indiana hits, all but one of them singles.

“It starts on the mound, and Blair Henley was outstanding,” coach David Pierce said. “He put is in a position to win.”

And then Shugart, who won on Friday, secured the victory for his second save of the year, striking out Sam Crail and Matt Lloyd with the bases loaded in the bottom of the ninth. After regular closer Andy McGuire allowed a leadoff single and hit a batter to start the inning, Pierce showed no hesitation in calling for the fiery, junior right-hander out of the pen.

“I just knew we had to have stuff right there,” Pierce said. “Andy wasn’t pitching from ahead, so we were going to go with velocity.”

And Shugart brought velocity. One of the most emotional players on the team, Shugart struck out Lloyd on a rising fastball to clinch the regional and the 40th win of the season.

He said he had no idea how hard he was throwing.

Pitching and defense have long been the trademarks of this baseball program, and they showed up in spades all weekend long. Over the course of three games, the staff allowed a measly five runs, only two of them earned for a microscopic 0.67 team ERA. That’s ridiculous.

This has been an atypical year for Texas on the mound. Baylor had the league’s pitcher of the year. Six Big 12 pitchers made first-team all-conference. None of them was a Longhorn. Oklahoma State, Baylor, Texas Tech and TCU each had one, and Oklahoma put two throwers on the team.

That all changed in the final series against TCU and in this regional. Henley allowed only two unearned runs, struck out eight and walked no one in 7 1/3 innings.

The defense was just as strong. In the field, the Longhorns committed only two errors, an uncharacteristic muff by the sure-handed shortstop David Hamilton against the Aggies and a wild, off-balance throw into center field by third baseman Ryan Reynolds versus the Hoosiers to cost a pair of runs. Reynolds more than atoned later by bare-handing a slow roller and throwing out the batter with the go-ahead runs at second and third in the eighth.

These were the two Texas staple that Pierce hoped to re-establish and would have, but for erratic performances by every Longhorn starter. Henley, for instance, gave up four runs over a span of four straight starts the last two months and walked six in an abbreviated start against TCU his last time out in the regular-season finale. But he was on Sunday.

“I kept the fastball down, then with 0-1 and 0-2 counts, I did a better job with curves and sliders in the dirt,” Henley said. “I did a good job not walking anyone. I hate that (habit). It was pretty cool.”

On this night, he was brilliant. The sophomore right-hander retired the first six batters of the game, endured a messy third inning and then regathered himself. He got command of his breaking ball about the fourth inning and set down 10 of the last dozen Hoosiers he faced in what was almost certainly his best game as a Longhorn, winning for the first time since beating Baylor the first week in April.

Was it his best outing ever?

“It was the most exciting,” Henley hedged.

“I think so,” rebutted Pierce. “I thought Blair was as good as he can be. He took the ball and competed.”

So it appears this Texas team may finally be rounding into form at just the right time. It likely will face a rugged opponent on the road if Ole Miss takes care of business in its regional, but nothing should deter this Longhorn group that has overcome all sorts of pitching demons, most of them self-inflicted.

“Frequently we did not throw strikes,” Pierce said of the season. “That was a critical piece because we were playing such a great defense. We told our pitchers we have an unbelievable defense, so let’s use ‘em. We started attacking the zone, and you could see the confidence build.”

His Hoosiers, seeded second here, battled past the Aggies in a steamy afternoon game and then gave the Longhorns all they wanted and almost more Sunday night until Shugart shut it all down.

Long enough to play in a super regional, for sure. At long last. But Texas will show up, armed and ready to go.

Golden: Aggies on the brink. Will we see a Texas rematch?