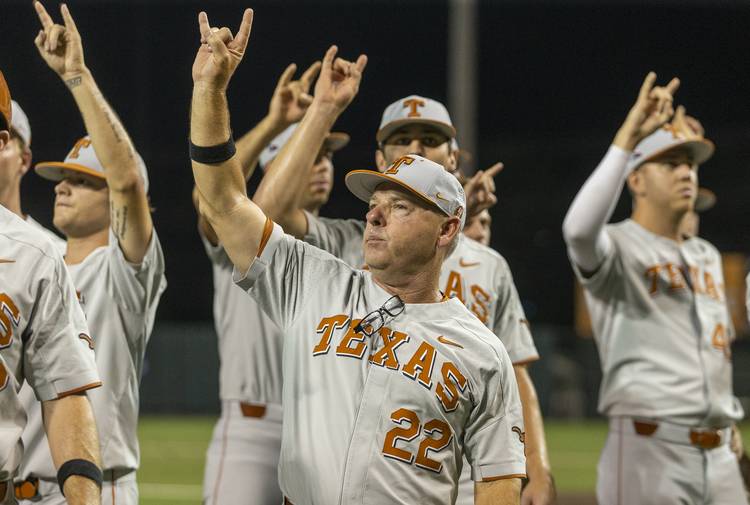 I haven’t seen David Pierce’s contract but I’m guessing there wasn’t any language in there about getting fired if he didn’t win in the postseason.

That sort of thing is just assumed when it comes to Texas baseball.

There’s a reason the program has only had three coaches in the last 50 years.

In his previous two stops, Pierce’s teams at Sam Houston State and Tulane were a combined 0-5 in NCAA Regional appearances so when he replaced the legendary Augie Garrido in 2017, there was a feeling in some circles that the athletic department was banking on potential and not playoff production.

After all, he had won four conference titles in his first five seasons as a head coach and before that was an important assistant on Wayne Graham’s pitching-rich Rice staffs that were a national force in the early early 2000s, including a College World Series title in 2003.

So even after the Horns failed to close out the Long Beach regional last season after winning their first two games — making Pierce 0-6 in regionals —  there were the great chance he would break through eventually.

With Graham wearing a Longhorn golf short from a Disch-Falk Stadium suite, Pierce finally stepped into the postseason winner’s circle as the head coach for the first time afterTexas turned back the Indiana Hoosiers, 3-2,  in a real teeth clatterering regional title game at Disch-Falk Field. Like a true Graham disciple, Pierce relied on his pitchers to lead the way while Regional MVP Kody Clemens and several others supplied the offense.

The late Augie Garrido made the words “Omaha is mandatory” a mantra for Texas baseball during his 20 seasons and Pierce has eagerly accepted the challenge. His team has reached the 40-win plateau for the first time since the 2014 College World Series semifinals. The Horns have a slugger’s — and pitcher’s — chance to get to Omaha, whether its as a super-regional host next weekend or if it has to travel to Oxford to play Ole Miss, the school Texas beat en route to its last national championship in 2005.

“It’s special for everybody in the organization,” Pierce said.  “We have so many great people that work for us and that work with us. I’m really excited for our coaching staff, they’ve been with me now for seven years. To have their expertise and energy and passion carry over to this team and this team feed off of it, it’s a great combination right now.”

Coaching is all about knowing your personnel and Pierce has shown an ability to push the right buttons and make decisions based not only on feel but on being these players for over 100 games. The current crew started the season 9-9 and struggled in several areas but Pierce stuck to his guns and encouraged them to play through whatever was ailing them at the time.

“This team was just going to make sure they deny any type of losing season,” he said. “We go off and win the Big 12 and then fight through and win the regionals. So now, we get another opportunity to continue playing with this team.”

They’ve bonded through adversity and even overcame a little bit of drama when left fielder Masen Hibbeler dropped what should have been a game-ending catch in the ninth inning. When asked why sticking with the same process even through struggles was important to the team’s current success, pitcher Chase Shugart said it all started with fall workouts and team bonding sessions on Friday mornings.

“Coach just said stay the course and stuff will start going our way if we stay and start doing the little things right,” said Shugart, who saved the regional finale. “For us to be good, we have to do the little things as he’s always said. Defense, pitching, hitting our spots. Whether it’s a clutch hit or making a play in the outfield, it all comes together with team chemistry and trusting one another and coach trusted us so we started growing as a team.”

As a result,  a Big 12 regular-season title followed, then a rebound effort from an 0-2 finish in the conference tournament. The old sports cliche’ says something about teams be peaking at the right time. The Horns are and they feel there is another level to attain but the level we witnessed this weekend was as good as we’ve seen for quite some time. Not only did the Horns  blitz Texas Southern and beat a fine Indiana team but they also helped foil Texas A&M’s attempt to return to Omaha for a second straight season.