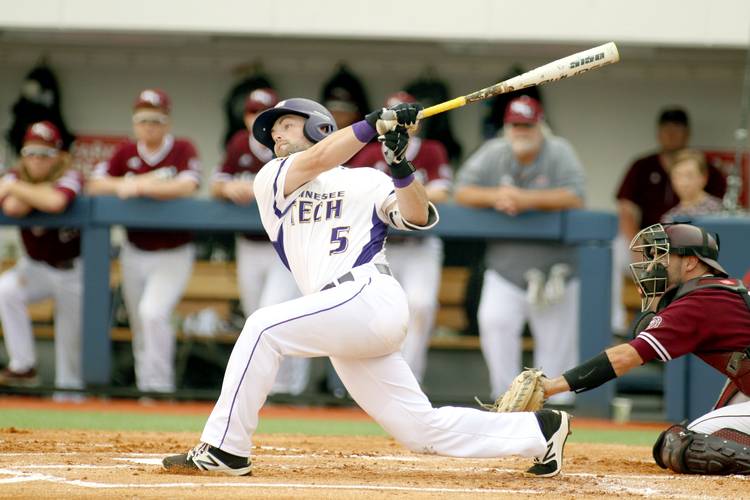 Tennessee Tech third baseman Trevor Putzig has been a solid hitter for the Golden Eagles, who claim several solid hitters --- Tech leads the nation in average, runs and home runs and is sixth in doubles. (Tony Marable/Herald-Citizen)

The last time Matt Bragga set foot in Disch-Falk Field, he was playing for the University of Kentucky baseball team in a 1993 regional. It was a brief visit.

He has no clue if he got a hit, forgetting his 1-for-4 plate appearances.

But he does remember the Wildcats going “two and Q,” and he has more than a faint recollection of Texas’ Brooks Kieschnick clearing the Green Monster in center field. “That guy was a monster,” Bragga said.

On Saturday, Bragga — now the head coach at Tennessee Tech — will bring a lineup full of Kieschnicks of his own when his rampaging Golden Eagles and their thunder bats take on Texas in a best-of-three super regional.

Don’t be fooled that Tech will be intimidated as the first Ohio Valley Conference club to even reach the super regional round. Not when they’ve posted a 28-game winning streak and knocked off top seed Ole Miss in a Monday doubleheader to claim a very hostile Oxford Regional.

Don’t give any thought to the idea that Texas will be overlooking a 52-10 team that has hit a whopping 134 home runs to lead all of college baseball. Should the Longhorns be scared? “I guess. I think they should respect us for sure,” said Tech first baseman Chase Chambers, whose .404 batting average with 17 homers paces the most dangerous lineup in the nation.

Don’t count on either team being fearful, even with the College World Series on the line. Texas does not resemble chopped liver either and can match its opponent in confidence and pitching along with a home-field advantage at spacious Disch where the Longhorns are a formidable 30-7.

“They can pitch, and they can really hit,” Longhorns coach David Pierce said. “There are no real holes in their lineup. You look at their lineup one through nine, they’re pretty powerful.”

So how good is Tennessee Tech?

“We know we can do it,” second-day starter Travis Moths said. “We have what it takes to get to Omaha. And win it.”

They pack a glittery home run belt WWE-style that one of the freshman pitchers bought. They’ve gone through three versions of the belt. “It’s probably a foot wide and a foot tall,” Chambers said. “It’s a huge belt. It swallows me up.”

When they knock one out of the park, the belt is presented to the batter who went yard and the entire team chants, “Yes! Yes! Yes! Yes!” The pattern’s been repeated so often, it’s a wonder the whole roster hasn’t gone hoarse. This is a club with eight grand slams but curiously not a single walk-off homer (Texas has three), perhaps because they’re usually blowing out their opponents.

Play in a band box? Not hardly. At Bush Stadium where the Eagles play, the center field wall is 405 feet, 5 feet longer than the Disch. They hit two more home runs on the road than they did at home. They never went more than three games without a homer.

A one-dimension team that can only hit for power?

Only an offensive club with no pitching?

Forget it. They had two pitchers taken in this week’s major-league draft before Texas throwers had their names called. Ultra-confident right-hander Marcus Evey (20th round, Yankees), who touches 96 mph with his fastball, goes Saturday while Moths (seventh round, Diamondbacks) will pitch Sunday with closer Ethan Roberts (fourth round, Cubs) waiting in the bullpen with his 14 saves.

Maybe they didn’t quite face the quality pitching Texas did against the likes of Stanford, Arkansas, LSU, Texas A&M, Baylor, TCU and others — their strength of schedule is around 160th — but the Golden Eagles hit everybody.

“We’ve seen some top arms. They don’t scare us,” Chambers said. “If we stick to our plans, we’re capable of beating anybody.”

Five of their hitters got drafted too, but that doesn’t include designated hitter/outfielder/pitcher Kevin Strohschein (.386, 18 homers), who stunningly has never been drafted.

“Kevin was co-freshman of the year with Clemson’s Seth Beer,” Bragga said of the Astros’ FIRST-round draft pick. “Kevin’s an amazing player with amazing power. It’s unbelievable why that hasn’t happened. You look at his legs and butt and body, and he’s got the ultimate baseball body. He’s just slipped through the cracks.”

None of the rest of them has, even though almost the entire roster didn’t get a recruiting sniff from Power 5 teams. Oh, shortstop David Garza, who has 16 deep flies, was recruited by Washington State but found a home at Tennessee Tech. So did Putzig, Chambers and second baseman John Ham.

The Longhorns will treat the Eagles with respect, but they won’t cower.

“They can swing it, I know that for sure,” said Texas’ Kody Clemens, who has 21 homers of his own. “But we don’t really give away bats. Our lineup is pretty strong one through nine, too. I’d say to all our fans, ‘Thank you,’ but we’re not done.”