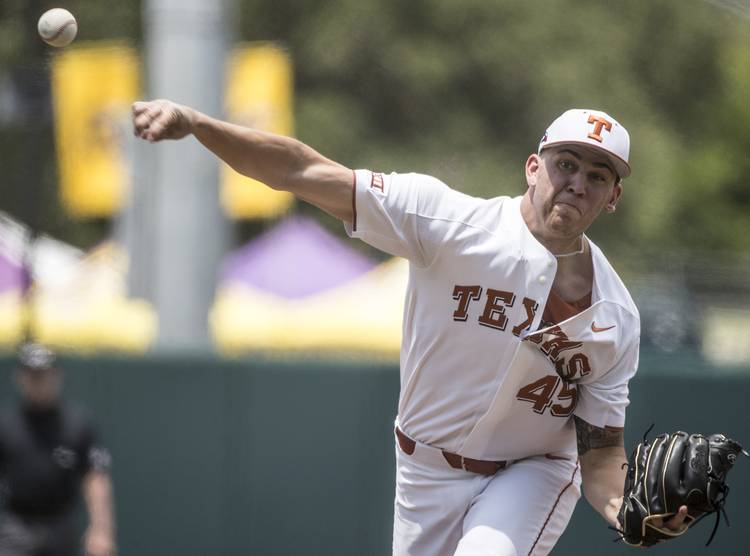 Officially, it was labeled a super regional.

In actuality, they could have called it the blooper regional because this was completely the opposite of the last tournament.

Texas did everything backward from the way it dominated last week’s Austin Regional, and the lapses cost the Longhorns dearly in a 5-4 loss to a talented, confident Tennessee Tech in this best-of-three super regional on a soggy Saturday afternoon before 7,062 at UFCU Disch-Falk Field.

If the opener in the series was any indication, it just might be a best of two.

The Golden Eagles looked that good.

But they had help.

Unlike in the regional, Texas wasn’t very efficient in any phase of the game and now faces elimination with another loss. How different was this series from the last?

Its starting pitching didn’t come close to finishing as starter Nolan Kingham was done before he completed five innings, made a few costly pitches and allowed five earned runs on nine hits.

It couldn’t muster up the big hit. Even though it was Texas that curiously had the only home run in a game featuring Tech and its nation-leading 134 long balls, with Kody Clemens’ solo blast, the Horns otherwise managed just three sacrifice flies. Of Texas’ total of five hits, three came from No. 9 hitter Jake McKenzie, and all were with no one on base. “We’re not worried,” McKenzie insisted.

Even the defense deserted the Longhorns. Shortstop David Hamilton committed a rare error, and relief pitcher Josh Sawyer bounced a throw to second for a forceout that never came. Neither miscue hurt Texas, but the play that wasn’t made hurt the worst. Center fielder Tate Shaw hustled his butt off and tried to spear the fly ball off Chase Chambers’ bat but couldn’t make the catch at the wall, and Tech had a two-run double in the fifth and a lead it would never relinquish at 5-3.

”I’ve seen him make that play before,” Texas coach David Pierce said. “I don’t know if he lost his bearings or what.”

But mostly this defeat came down to offense.

And Texas had very little.

Even in the ninth, the Horns went down in order as pitcher extraordinaire Ethan Roberts retired 12 of the last 14 batters he faced to post his 15th save. If nothing else, Texas might be spared another look at the feisty right-hander with the hard cutter Sunday unless, as Tech coach Matt Bragga said, “maybe we need a tough out.”

For the game, the Longhorns went 0-for-11 with runners on base and hitless in four chances with runners in scoring position. None was more pivotal than the sixth inning when Clemens and Zach Zubia set the table with consecutive walks.

None of the next three Texas batters made contact against Roberts, whom Bragga wisely inserted in the game at that crucial juncture. Roberts, a fourth-round draft choice of the Cubs who threw almost eight innings in his first start of the year to beat Ole Miss in the regional elimination game, mowed down Masen Hibbeler, Ryan Reynolds and D.J. Petrinsky. He struck out all three in a brilliant four-inning relief performance, allowing only a single run in the seventh on Hamilton’s sacrifice fly.

“Masen just didn’t get the job done,” Pierce said of the fouled bunt attempt and then a strikeout. “We looked like we had some pitches we could hit, but we didn’t handle them.”

It only gets worse for Texas.

Pierce has already used up his ace and had to turn to three of his relievers for extended action.

The Golden Eagles are flush with confidence.

Even worse, Kingham ticked off Tech when he fielded John Ham’s comebacker to end a threat and then talked smack to him. That prompted Chambers to respond in kind after his big double when he chastised Kingham and said, “Don’t big-league us.”

That only served to further awaken an aroused bunch of lions. Or Eagles.

Much work remains to be done.