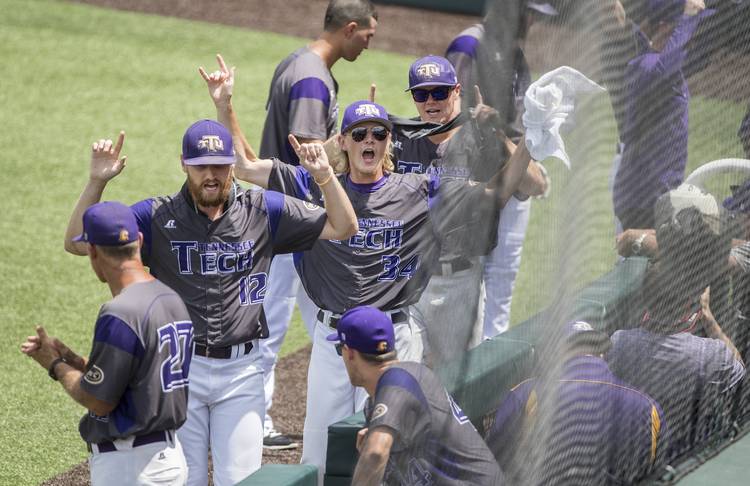 Tennessee Tech celebrates a run in the top of the fifth inning against Texas during the NCAA Austin Super Regional at UFCU Disch-Falk Field on Saturday. RICARDO B. BRAZZIELL / AMERICAN-STATESMAN

It’s one thing to walk into a hostile road environment with 52 wins.

The Tennessee Tech Golden Eagles are as good as advertised, and the Texas Longhorns, who rolled through the Austin Regional unscathed, just got hit in the mouth.

This isn’t saying the Horns are going two-and-’cue in a super regional this close to Omaha, but that their next one or two games will be played with the understanding that it’s win or stay home.

Saturday’s 5-4 win brought to mind a weekend in 2005 when a battle-tested Texas team went into Oxford, Miss., and took down the Ole Miss Rebels in an epic super regional. Those teams had a healthy dose of respect for each other, as do these, but Texas was coming off three consecutive College World Series appearances, and Ole Miss knew it. These Eagles have been good for the past couple of seasons, but they still carry themselves like a 10-run underdog. Hungry. Testy. Confident.

Texas coach David Pierce said earlier this week that there are 16 teams remaining in this tournament and all believe they are going to Omaha. The Eagles, just like the 2005 Longhorns, had to go through Oxford to keep their season going. Tech is attempting to make it to Omaha by navigating an impressive Oxford-Austin double.

One thing is obvious: This group is not lacking for confidence. If anything, a spectacular regular season and a doubleheader sweep of Ole Miss has the Eagles feeling like they’re the best team in the country. It definitely steeled their wool for one of the toughest road destinations in college baseball.

“The Ole Miss fans … they were rowdy and they were rough,” Tech first baseman Chase Chambers said. “It prepared us for this type of environment. Ole Miss was a little more rise-and-fall. The crowd today … there was definitely a lot of noise today, but you could hear a few more individuals today. But we’ve dealt with that all year playing in smaller parks.”

They didn’t come here to lose, and one exchange pretty much let us all know that we’re in for a real scrap the rest of the weekend. Texas starter Nolan Kingham — also not lacking in the confidence department — got out of a jam in the fourth inning by retiring John Ham on a comebacker, but he gave an extra glance at the hitter before throwing to first base.

The sellout crowd of 7,062 noticed, and so did the Tech dugout.

One inning later, Chambers rocketed an RBI double off the center field wall — a ball that Texas’ Tate Shaw might have misjudged — giving the Eagles a 5-3 lead that held up, thanks to starter Marcus Evey and reliever Ethan Roberts, who struck out the side with two men aboard in the sixth and sat down 12 of the 14 hitters he faced.

As he stood on second base, Chambers reached out to Kingham — verbally, of course.

The Eagles also were smart enough not to allow arguably the best player the country to beat them. After Kody Clemens’ 22nd homer put the Horns up 3-2 in the third, the Tech pitchers walked him twice and stayed away from him for the most part. First baseman Jake McKenzie had three of Texas’ other four hits. The rest of the team went 1-for-23.

Texas already respected Tech before the team got here, but now that respect is tinged with the reality that the Horns have run out of mulligans this weekend. The Rebels only needed to beat the Eagles once to host the Horns in a super regional. They failed. Now Texas has to win twice to stay alive.

When asked if his team has gotten the proper amount of respect, Roberts gave a measured response, laced with a touch of swagger.

“It’s getting there,” he said. “We come from Cookeville, Tennessee. We’re Tennessee Tech. They finally figured that out.”