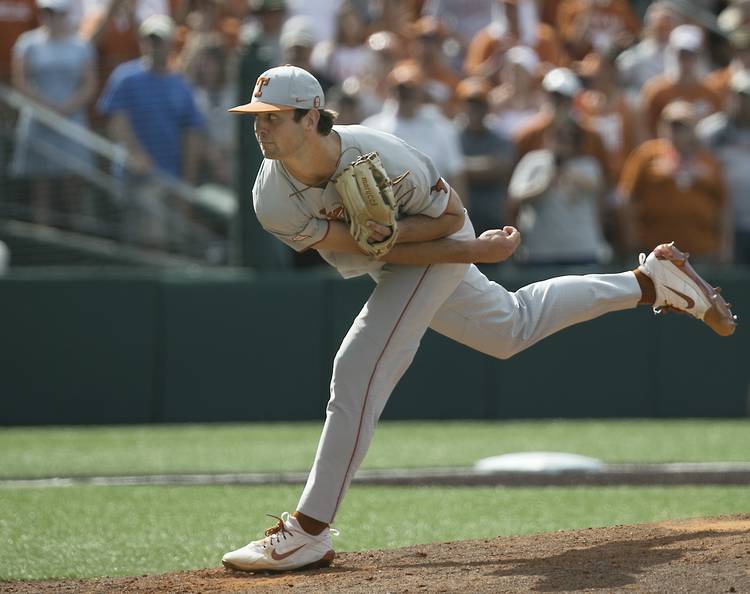 David Pierce made the biggest gamble of his Longhorns coaching life.

And consequently Texas lives to play another day.

At the critical juncture of the Austin Super Regional, Texas’ second-year coach turned to his expected Game 3 starter. But he had to ensure his team made it through Game 2 Sunday just to get there.

The Longhorns did just that, riding the most impressive pitching performance of the season when starter Chase Shugart and starter-turned-reliever Blair Henley combined on a brilliant three-hitter to stifle the best offense in college baseball and shut down Tennessee Tech 4-2 to force Monday’s decisive championship game.

Texas fell to the Golden Eagles Saturday afternoon but hadn’t lost two straight games until, well, not all that long ago when the Longhorns got bounced quickly from the Big 12 tournament two weeks ago.

The big picture favors the Longhorns because they have played 11 three-game series prior to this weekend and won eight of them. Their only series defeats came at the hands of LSU, Kansas State and West Virginia, but none of those were at UFCU Disch-Falk Field where Texas will be the home team Monday.

“Texas pitchers dominated our hitters,” Tech coach Matt Bragga said after his club was held to a season-low three hits after being five-hit twice this season. “My goodness, six strong innings (from Shugart), no earned runs. The guy was dynamite.”

Pierce’s decision to insert Henley before 7,151 fans could have blown up in his face. It was a calculated risk — and a huge one — when he asked him to get Texas through the last three innings. But he did, allowing a first-pitch, solo home run to David Garza before retiring the next nine in order for his first career save.

The Golden Eagles have 135 home runs, but just one in the first two games, and have totaled seven runs after averaging more than 10 runs a game this season. They’re hitting only .215 as a team, and their three hits Sunday were their fewest since getting one-hit in February 2015 by Northern Illinois.

“We had an opportunity to win it, and we went for it,” the coach said. “I knew Blair was fresh. It was the right decision for us.”

The gamble paid off on Sunday, but could it backfire on Monday? That’s exactly the kind of gut move coaches have to take to reach the College World Series.

Pierce gave no hint to his Game 3 starter, saying, “Everybody’s available. Even if it’s for one hitter, if they want to go to Omaha, and that’s kinda the plan.”

Likely candidates include Matteo Bocchi, a junior right-hander who pitched well against Texas State in mid-May in one of his three starts, and freshman relievers Kamron Fields and Bryce Elder. Heck, Henley threw only 39 pitches in his three innings and might have plenty left.

RELATED: Golden: A good Austin super regional is better with emotion from both Texas, Tennessee Tech

Roger Clemens, you got an inning in you from the stands?

It won’t be Shugart, who was magnificent with a sharp fastball and a biting slider. The junior right-hander pitched six tough innings, navigating his way through a dangerous lineup and holding Tennessee Tech to a single unearned run on a throwing error by second baseman Kody Clemens. That was Clemens’ one hint at showing he’s mortal because he continued to be Mr. June (and May) with another home run, his 10th since May 1 in a span of 15 games.

Shugart’s biggest moment came on his final and 99th pitch of a hot, sweltering afternoon. After a pair of walks sandwiched around a strikeout of Brennon Kaleiwahea, Shugart retired both Chase Chambers, the nation’s RBI leader, and Trevor Putzig on fly balls to keep TTU in check.

”They went deep in the count, and it was really driving me nuts,” said Shugart, who now has 11 career victories and 10 saves in 80 appearances. “I was just attacking the strike zone.”

The fiery Shugart has yet to give up an earned run in three NCAA post-season games spanning 12 2/3 innings. Texas Southern, Indiana and Tennessee Tech struck out 12 times and managed just six hits off him.

“When you’re playing an elimination game,” Pierce said, “that was probably as good as we’ve had all year, no doubt.”

Golden: A good Austin super regional is better with emotion from both Texas, Tennessee Tech