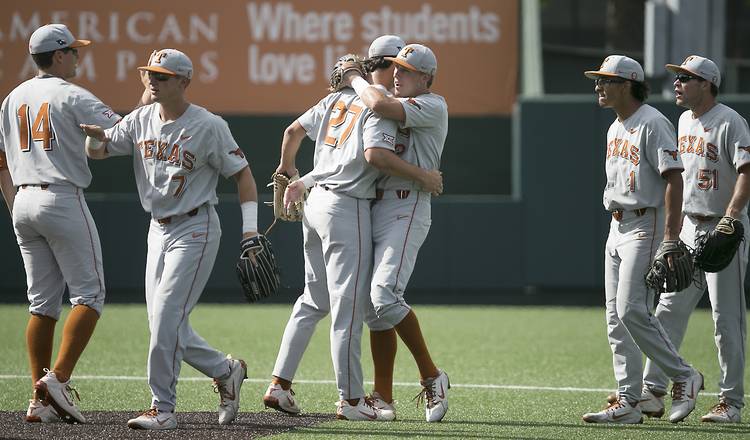 Texas and Tennessee Tech just met a few days ago, but it didn’t take long for sparks to fly.

The Hatfields met the McCoys.

When there’s a College World Series berth on the line, it makes no sense to waste time with pleasantries. The Longhorns and Golden Eagles aren’t exactly brother-in-lawing after splitting the first two games of this best-of-three Austin super regional because the stakes are so high.

We’ve witnessed some good trash talk, plenty of Hook’em Horns signs from the home team and a couple of downward Hook’ems from the visitors, who must have figured out some time ago the best way to get under a Longhorn’s skin.

Add to that, nothing’s been decided yet.

The Horns drew second blood on an elimination Sunday with a 4-2 win highlighted by the phoenix that is Kody Clemens and right-hander Chase Shugart who threw a brick wall at the most imposing offense in college baseball: Two hits and zero earned runs over six innings. Blair Henley, once thought to be the Game 3 starter, showed up in relief, gave up a homer on his first pitch then shut down the Eagles over the final three innings.

One day after the Eagles talked about how much emotion played a role in their Game 1 win, the mood was noticeably different post Game 2. It was like they went from a towering inferno behind fiery first baseman Chase Chambers — who boasted about telling Texas’ Nolan Kingham not to big-league his team — to a three-hour cram session at the LBJ Library.

It was evident the Horns got some respect from the visitors who already knew what they were facing when they arrived on Thursday. Tech coach Matt Bragga explained Chambers’ earlier comments as being in the heat of the moment. Understandable in 95-degree heat in front of more than 7,000 fans with a College World Series berth up for grabs.

“I think you’ve got to be careful because baseball’s not football,” Bragga said. ” In football, now it becomes personal and now there’s an intensity level that helps you. In baseball, you have to be very careful when emotions start riding that you don’t become emotional because emotions in baseball can be very bad because all of a sudden, you’re focusing on the other team instead of what you’re supposed to do.”

I hear that, but Bragga may not know that Texas has always played baseball down here with a football mentality. That includes Clemens, who was more than happy to take advantage of a Bragga’s decision to pitch to him early with an RBI double in the first inning and his 23rd homer in the third. Remember that three-run homer Kody hit against Texas A&M in the super regional and the stare down he gave the Aggies dugout as he rounded third base? Well the Golden Eagles got a taste of the same as Clemens extended his arm and flashed the hook’em in their direction before he crossed the plate.

Yep. Emotion and heat. We’ve seen plenty of both in the first two games and more will follow in the finale.

“For us, we want to control our emotions but we don’t want to be emotional,” Texas coach David Pierce said. “When there’s something that happens in the course of a game, I love for our guys to get excited but then regroup and understand that it’s one play and let’s move on. But our emotion, we feed off of.”

It’s not bragging if you can back it up. The Horns have had no problem sticking their collective chin out to the opposition and what’s followed has been nice step forward in Pierce’s second season. He has admirably allowed his players to be themselves while giving just the right touch of guidance to keep the machine surging forward.

“This team is tough, they’ve got great grit and they do it for each other,” he said. “The right pieces have fallen in for the simple fact that they’re not willing to give in.”

He thought Texas was the the more nervous team before Game 1 and the results weren’t favorable. The Horns played looser in Game 2, got much better results and extended their season.

The emotions will be flowing in a winner-take-all Monday matinee.