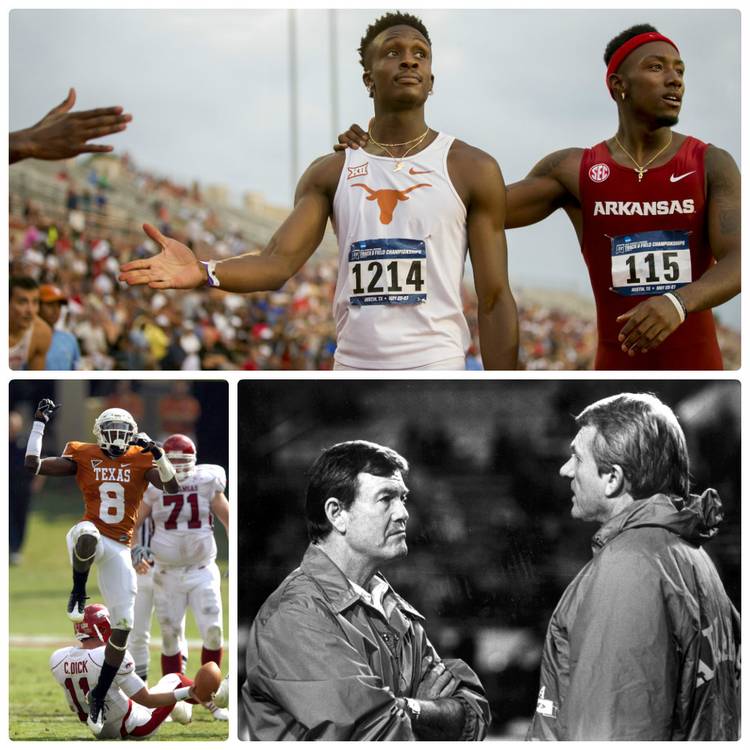 OK, we exaggerate, but beating the Longhorns in anything can be a matter of the highest priority for Razorbacks fans, which is why Hogs coach Dave Van Horn raised some serious eyebrows at Friday’s press conference when he said he thought the Arkansas-Texas rivalry that began on the football field with a 54-0 Horns win in 1894 was a bit over-stated.

Some would say Texas is still Arkansas’ No. 1 rival even though the Razorbacks left the Southwest Conference after the 1991 season and the two have barely met since in the three mainstream sports.

“I would say maybe for adults over 50, they might be (the top rival),” Van Horn said. “Our players, they want to beat LSU and Florida and Mississippi and (you) could go on and on. But I think a lot of our fan base, they still see it that way.”

Van Horn, a former Razorbacks infielder, probably is trying to tamp down the emotion because it’s a distraction. Can’t blame him.

“I believe Texas remains Arkansas’ No. 1 rival for older fans,” long-time Arkansas writer Bob Holt said, “but not those who have come of age since the Hogs joined the SEC. But for fans in their 70s and older, for sure it’s Texas, and probably also for those 45 and older as well. You just never forget your first love-to-hate rival.”

The balance of the SEC — save for Alabama in football — is a marked difference from the old SWC because, as Holt said, “I think it’s tough to build up all this hate in a sporting sense for one team. Texas was the King Kong of the SWC, so the Horns always had a big target on their backs, and Arkansas was usually the second-best team in a lot of other sports.”

Asked if he believed the rivalry isn’t as strong as in the heydey when the two schools were in the same league, Texas coach David Pierce said, “I don’t buy it. It’s changed, but it’s going to be a rivalry more with the old guys. If you played it or coached in it, it is (big), but definitely more for the older generation.”

RELATED: The top players to watch in this year’s College World Series

Unfortunately, Arkansas-Texas, like many rivalries, have gone the way of the telephone booth and the typewriter. Both are archaic notions that no longer have relevance. Texas owes Arkansas another game in a delayed home-and-home football series and will visit Fayetteville in 2021.

The nature of the rivalry may have worked against Arkansas. The Razorbacks always caught the Longhorns a week after the Texas-OU game, and often the Longhorns’ emotional tank was empty. But the Hogs put so much pressure on themselves to win, it was counterproductive.

For Arkansas, this was the ultimate game. For Texas, it was the next game.

Arkansas might have won more meetings if Ken Hatfield hadn’t disdained the pass. Or Bret Stafford hadn’t found Tony Jones in the end zone in 1987, the first time Texas had ever won a game on the last play.

These two football programs played one of the most electric sporting events in the game’s history with Texas’ epic comeback win in Fayetteville on a cold, dreary December day in front of Billy Graham and President Nixon. They didn’t call it the Big Shootout for nothing.

Arkansas and Lee Mayberry denied Tom Penders’ BMW Longhorns a spot in the Final Four in 1990.

Yes, each school has pinned devastating losses on the other, and the memories linger. New ones will be made Sunday as Texas and Arkansas meet in Bracket 2.

The two teams met this season as Arkansas trounced Texas on consecutive nights in mid-March although the two Longhorns starters in that series, Beau Ridgeway and Nico O’Donnell, haven’t thrown a pitch in this NCAA postseason.

But Sunday’s won’t be.

As the lone member of the conference not in the state of Texas, Arkansas long felt mistreated by the rest of the SWC schools. In league decisions. In officiating. In scheduling. The Razorbacks were always the outsiders.

In addition, Razorbacks athletics have long been the source of the biggest state pride, and it regarded meetings with the flagship school in Texas as a prime chance to flex its muscles. Never mind that a ton of the Razorbacks players from Bill Montgomery to Barry Foster played their high school ball in Texas.

Arkansas did little to hide its disdain for Texas. Horns fans seethed when football coach Houston Nutt flashed the upside down Hook ‘em sign after the Hogs crushed the Longhorns in the 2000 Cotton Bowl and at Bret Bielema for doing the same in a photo shoot with UT coach Charlie Strong before the 2014 Texas Bowl when the Longhorns barely mustered a few first downs.

It doesn’t take much to stir these bad feelings. And Texas’ Kody Clemens, who has a way of provoking opposing dugouts during his home run trots, said, “We’ll see what happens.”

But Van Horn said it’s not a big deal with his team, and Pierce said, “I bet you half the guys on our team don’t know we were in the same conference once.”

They will by Sunday. As Kingham noted, “Other teams are finding a reason to hate us.”

For Arkansas, it won’t have to look very far.

Bohls: Years later, Coach Gus still leans on the edge of his recliner for every Texas pitch