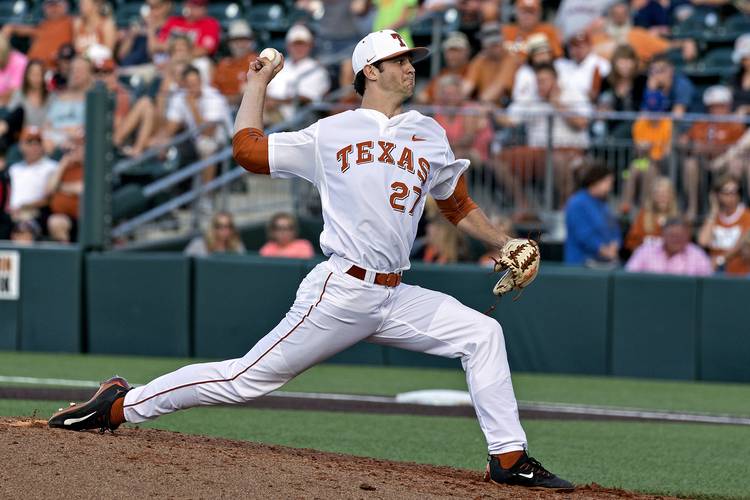 Once this post-season ends, the Texas pitcher said he’ll make his way to the Cape Cod League where he’ll join five of his Longhorns teammates for summer ball.

After that, he’ll return for fall workouts as a prelude to the preparation for the 2019 season, and Henley will be among the clear leaders for David Pierce’s team. And given the likely departures of Nolan Kingham and Chase Shugart and their 25 starts, he probably will emerge as the ace.

“That’s the plan,” Henley said with a confident nod.

The sophomore right-hander from Fort Worth with a fastball in the low 90s and a composed disposition could go a long way toward cementing that role for 2019 with his next start. That will be Tuesday afternoon in a CWS survival game against, uh, the top-ranked team in this tournament and the defending national champion.

And an angry Florida at that.

Henley’s job will be to keep his team in the hunt for its seventh national championship and first since 2005 by trying to check a Gators team that’s still seething after a shocking, 6-3 loss to a very under-rated Texas Tech club on Sunday night.

Florida managed just five hits, including a misplayed ball that landed safely for a Jonathan India triple over the Tech right fielder’s head, but this is a talent-rich roster. Seven Gators were drafted, among them Tuesday’s right-handed starter Jackson Kowar, a first-round sandwich pick of the Kansas City Royals and a big-arm pitcher who has electric stuff and a fastball that will reach 96 mph.

Its top seeding aside, however, the Gators have been scuffling for a while. They’ve gone 5-9 in their last 14 games and lost six of seven to Georgia, Mississippi State, Arkansas and LSU in one bad stretch in the last month, so they’re not invincible.

Besides, Texas has proven it shouldn’t be taken lightly, having won 14 of its last 21, which includes two meaningless losses in the Big 12 tournament where the Longhorns had very little incentive.

“I’m excited,” Henley said following a light workout Monday at Bellevue University’s Roddy Field. “We’ll have Chase (Shugart) in the back part of the bullpen and all hands on deck, but I hope we’re not going to get into that situation.”

The keys for Texas to avoid elimination are obvious:

Stay loose as the Longhorns were Monday when second baseman Kody Clemens and pitcher Nolan Kingham were volleyballing back and forth with some of the most entertaining, freestyle rapping these ears have ever heard in all my freestyle rap-listening days.

There’s no reason to think either prerequisite is out of the question.

Yes, winning six games over the next eight or nine days will be a difficult proposition, but I doubt an uptight lineup would be the reason. This is a focused team that has thoroughly enjoyed the journey and has had fun along the way, but there’s a reason only three of the last 37 CWS winners didn’t win their opening game, 2010 South Carolina team the most recent.

It’s tough, but this has been a mentally tough bunch of Longhorns ever since they began the year 9-9. In their NCAA-record 36 CWS appearances, the Longhorns have lost their first game here just 13 times, including in 1950 when they ultimately won the title. They’ve been eliminated with two quick losses just four times.

With Henley, fans can’t be sure if they’ll get the budding star who blanked Indiana on two unearned runs over 7 1/3 innings and handcuffed Tennessee Tech with nine outs in 10 batters in the super regional or the struggling No. 3 starter who allowed four earned runs in four of five Big 12 starts at midseason.

Henley thinks those rough patches were due more to mental lapses than mechanics.

“It wasn’t a lot (to be found) on tape,” he said. “My mentality was not in the right place. I was nibbling. I started the year strong, but I just have to go after guys. I need to be attacking and getting ahead in the count.”

Pierce is fully confident in Henley and reiterated that he prefers Shugart coming out of the bullpen and following Henley than the other way around.

“Blair’s got stuff,” Pierce said. “He can throw four pitches for strikes, and he has four plus pitches.”

And Henley relishes the opportunity in his first CWS.

“We’ve been knocked down before,” he said. “Nobody’s down. Nobody’s upset. We just have to have better stuff. We’re here to win every game.”

Bohls: Even in early CWS defeat, we see that David Pierce has brought Texas baseball back