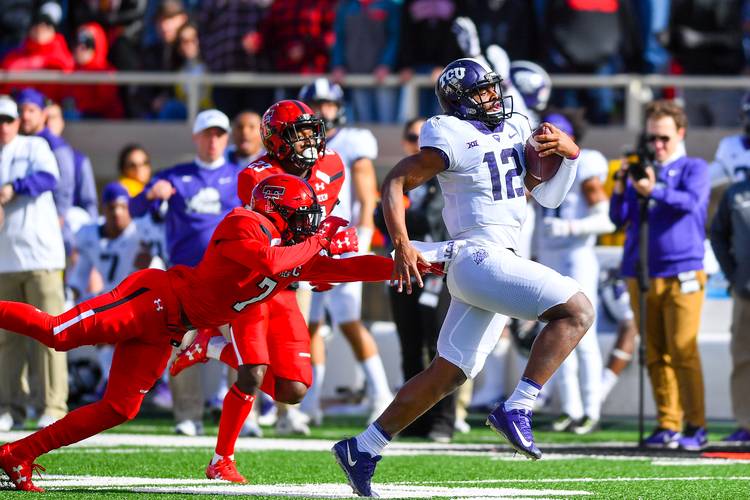 Shawn Robinson (12) of the TCU Horned Frogs outruns Jah'Shawn Johnson (7) of the Texas Tech Red Raiders during the first half of the game on November 18, 2017 at Jones AT&T Stadium in Lubbock, Texas. It was Robinson's lone start of the 2017 season. (Photo by John Weast/Getty Images)

FRISCO — Will the next great Big 12 quarterback please stand up?

For the first time in quite some time, there is a lack of elite signal callers in the college football league that has helped build its offensive reputation on the arms of stars like Vince Young, Sam Bradford, Robert Griffin III, Colt McCoy and Jason White.

Don’t forget recent throwers like Oklahoma State’s Mason Rudolph and Baker Mayfield, who led Oklahoma to within one good half of winning a national championship in his Heisman Trophy campaign last season.

“There have been some great quarterbacks come through the Big 12,” said TCU sophomore quarterback Shawn Robinson. “That’s one of the primary reasons I’m here today. I’m trying to be one of them eventually.”

Robinson’s Horned Frogs need to him to grow up quickly if they are to match or top last season’s 11-3 finish that included a pair of losses to league champion and national semifinalist Oklahoma. While West Virginia’s Will Grier is the biggest name behind center entering the season, the history of this conference tells us that someone will emerge. One always does.

“That’s the neat thing about this conference,” Iowa State coach Matt Campbell said at Monday’s opening session of Big 12 media days. “Maybe there’s not the big names right now, but I have a feeling that they’re probably coming.”

The Frogs return six starters on defense but the biggest question is if they will get enough production at quarterback to unseat the Sooners. Robinson spent most of his freshman year as Kenny Hill’s understudy but appeared in six games, including a November start at Texas Tech where he posted 169 yards of total offense in a huge 27-3 road win.

Robinson made history as the first true freshman to start for TCU in Patterson’s 17 seasons. Now with Hill playing in the Canadian Football League, Robinson is the front runner to start the opener against Southern.

The Little General isn’t about to name a starter, but the fact he decided to bring Robinson to media days says something about his confidence in the youngster. Maybe it was a bit of superstition after the Frogs went 6-6 two years ago when he left Hill at home. Last season he brought Hill and TCU finished with 11 wins. He doesn’t usually bring young players but decided it would benefit Robinson in the long run.

Robinson wasn’t blown away by the 500-plus media members assembled at The Star. The Metroplex product is accustomed to the big stage after leading DeSoto to a Class 6A state title in 2016. Patterson said the best thing that happened to Robinson last season was having to prepare as a starter for Tech.

“It’s so different, especially for a freshman,” he said. “You just graduated from high school and you came in January and you’ve been here from January to August and now we’re going to throw you in, and you’re not even going to play at home. You’re going to play at Lubbock, which is a hard place to play.”

Robinson completed only 48 percent of passes, but the upside is there. The concern from Patterson has to be a lack of experience and depth on the offensive but there is plenty of firepower in the backfield with running back Darius Anderson and wideouts KaVontae Turpin and Jalen Reagor, who caught a team-leading eight touchdown passes.

Robinson said he’s using this trip as a chance to grow.

“My main focus has been to grow up,” he said. “(Playing six games) was huge to get my feet wet. It’s not like high school. I can better physically and mentally. I accept that challenge. No pressure, no diamonds.”

Over the years, we’ve seen many quarterbacks leave this league to successful have careers at the next level, including program legend Andy Dalton, who led the Frogs to the 2011 Rose Bowl win over Wisconsin, capping off Patterson’s only undefeated season. Trevone Boykin became a nice success story before personal issues derailed his professional hopes. Linebacker Ty Summers told me that Robinson reminds him of Boykin on the field except that he’s physically stronger.

Patterson has always been able to surround his inexperienced players with enough talent to navigate the facing in the offensive pressure cooker that is the Big 12.

Bohls: For Oklahoma, there’s a new quarterback and a newish offense — but no problem

Bohls: Still longing for elite status for Texas? The Horns still have ‘some’ way to go